Argentina on Wednesday launched an international tender for a multibillion dollar pipeline to transport natural gas from the Vaca Muerta shale formation in the western part of the country to capital Buenos Aires. Bids will be opened on September 12. 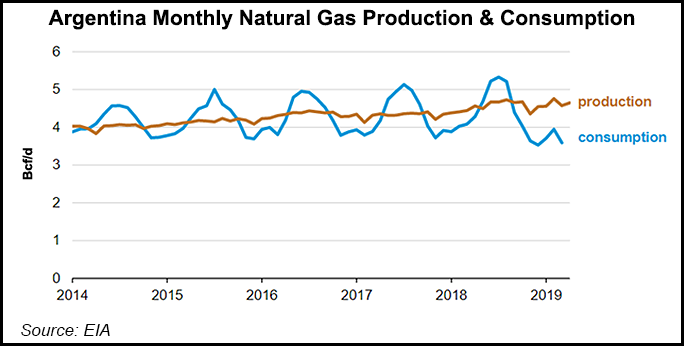 The government aims to have the pipeline complete by winter 2021 and says that by supplying the Greater Buenos Aires and Rosario areas with domestic natural gas, the pipeline will replace $240 million/year in liquified natural gas imports (LNG).

“The pipeline will help us improve the country’s trade balance and increase production from Vaca Muerta, which means more work for Argentines, both in the area and in the entire industrial value chain,” Energy Secretary Gustavo Lopetegui said. “It’s one of the most important infrastructure projects that we have ahead of us.”

Lopetegui projects that Argentina will achieve an energy trade balance this year and a $2 billion surplus in 2021.

Shale gas production has surged in Argentina from its Vaca Muerta deposit, more than tripling between January and December 2018, from 0.3 Bcf/d to 1.0 Bcf/d.

Total natural gas production grew 5.8% in June, and Argentina is producing gas at its highest rate in 11 years. The country, which suspended natural gas exports to Chile in 2007, has restarted pipeline exports and now sends seasonal shipments averaging 4.33 million cubic meters (MMm3) per day, or 153 MMcf/d, to its neighbor across the Andes. Year-round exports are expected to start next year.

The country also started shipping out small scale LNG exports in June, the first of its kind. The LNG was produced on Exmar NV’s floating LNG production barge called Tango FLNG, at the Bahía Blanca port, and using natural gas piped in from Vaca Muerta. The vessel has production capacity of 500,000 metric tons, or about 0.07 Bcf/d, and could produce up to eight LNG export cargoes per year, according to the U.S. Energy Information Agency.

Wood Mackenzie sees Argentina LNG ramping in 2024 with LNG production volumes reaching 6 million metric ton/year, which could then grow to 10 mmty by 2030.

One of the problems with the explosive growth in Vaca Muerta has been a lack of infrastructure. The three natural gas pipelines out of the Neuquén Basin, where Vaca Muerta is located, are currently operating at full capacity. YPF even said earlier this year that it was curtailing investment due to a lack of takeaway capacity.

The new pipeline will extend 570 km from the Tratayén processing plant in Neuquén province to the Saturno compressor station in Salliqueló, Buenos Aires province, where it will then stretch another 470 km to San Nicolás, also in the province of Buenos Aires. Cost estimates run in the $2 billion range.

The pipeline’s capacity will be 15 MMm3/d, or 530 MMcf/d, with the option to expand to 40 MMm3/d in future stages, depending on the growth of Vaca Muerta production and future gas demand in the country.

The government announced it was looking for interested parties in developing the pipeline in April, and has now published tender documents. Further information, in Spanish, can be found by clicking here.

This will be the first new natural gas pipeline system out of Neuquén since Neuba II, built in 1989.

The government clearly wants to execute the contract before its general election in October. Current president Maurcio Macri, who has done much to reverse the fortunes of the energy sector, will face an uphill battle to win a second term as the country fights soaring inflation, a badly wounded currency and a recession. The upcoming primaries on Aug. 11 should provide a sense of whether voters are willing to give the president another term.