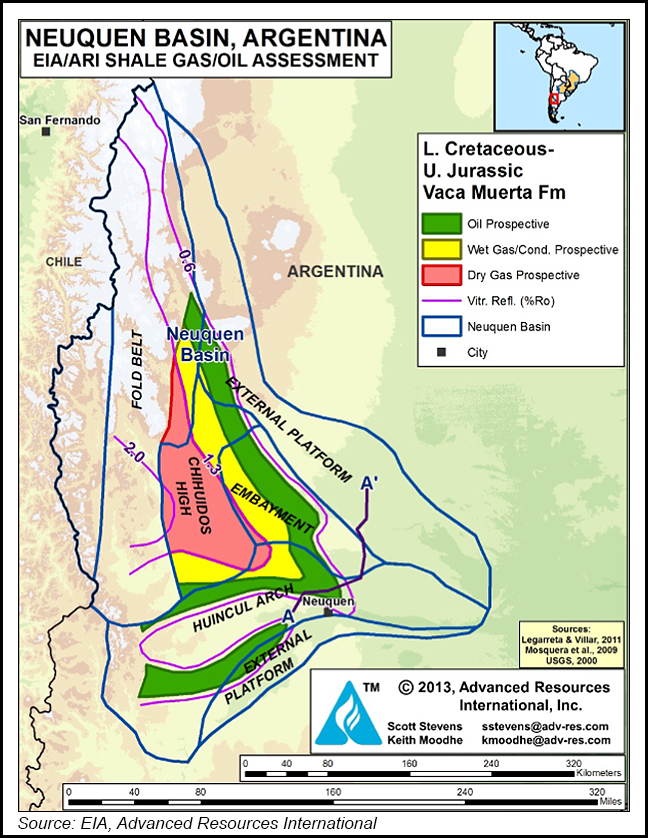 Argentina’s government on Monday announced that Darío Martínez would take over from Sergio Lanziani as the Energy Secretary, the top position in the energy sector.

Martínez was head of the energy committee in the lower house. He previously worked for state energy firm YPF SA, and he hails from Neuquén Province, where most of the world class Vaca Muerta shale deposit is located.

Energy policy has remained vague under the government of Alberto Fernández, who assumed the presidency at the end of last year, and the industry has been hampered by the coronavirus, leaving the future of Vaca Muerta uncertain.

“I believe that the relevance of Vaca Muerta has been clear for the new administration ever since they took office,” Buenos Aires-based Principal from Wood Mackenzie Ignacio Rooney told NGI. The previous secretary “had taken time to name his complete team, and it was contradictory to see this time taken when the energy area was so relevant for the new administration. The expectation is to see more action from the new secretary.”

Natural gas production in Argentina decreased by 10% year/year in June to 126 million cubic meters/day (MMm3/d), or 4.45 Bcf/d, according to the Energy Secretariat.

One of the first matters expected to be addressed by Martínez is the country’s gas tender plan aimed at ramping up natural gas production. The proposed tender system would consist of a four-year block auction mechanism starting in October, which would differentiate offers for the peak winter season and the rest of the year, according to the IAE Argentine Energy Institute.

Prices for offers from gas companies would be set at a limit of around $3.40/MMBtu.

“Providing a four-year price signal allows companies to extend their planning horizon and reduce a portion of short-term volatility,” Rooney said. “However, this is a long-term industry, and companies look beyond those four years. The industry also requires commitment after year four, which could be addressed by defining sequences of auctions that could happen on a yearly basis combined with short-term auctions to address demand peaks.”

Another shift in the energy sector in Argentina has been that the Energy Secretariat, once the Energy Ministry, now falls under the domain of the Economy Ministry.

The reasoning has been that the gas plan, along with a previously announced oil scheme, will mean rising government subsidies are needed in the sector. The government would have to pay the difference between what distributors and end users pay and what has been promised to producers.

Accumulated energy subsidies were $2.6 billion in the first half of 2020, double the same period last year, according to the IAE.

“It can be read as a stricter fiscal control,” Rooney said, referring to the change. “The energy sector in Argentina drives a significant portion of subsidies, and these will face higher scrutiny now.” The natural gas plan “is another element of the broad subsidy scheme in the whole energy sector, and the Economy Ministry will be looking at them in greater detail.”

Earlier this month the Argentine government announced it had reached a preliminary agreement with its biggest creditors to restructure $65 billion in foreign debt. The government said the agreement would allow creditor groups to support the debt restructuring proposal and “grant Argentina significant debt relief.”

If the deal goes ahead, along with another debt agreement pending with the International Monetary Fund, Argentina would regain access to foreign capital markets, which is seen as key to lifting an economy that is now in its third straight year of recession.