Montney Shale pure-play Arc Resources Ltd. is forecasting strengthened pricing at the NOVA/AECO hub in western Canada relative to the U.S. Henry Hub over the coming months, according to management. 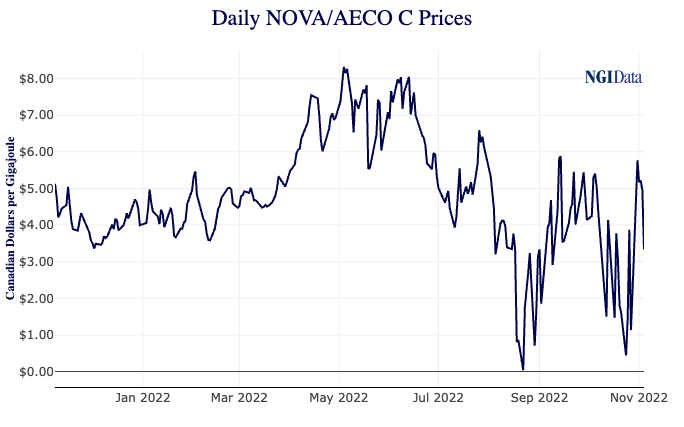 In a conference call to discuss third-quarter earnings, CFO Kris Bibby said “we are excited for the immediate near term in the winter. We would anticipate very healthy pricing heading through winter, just given the demand construct that we’re seeing and how strong it is.”

He added, “As we move into the summer, one of the key things is there will be some expansions” on the Nova Gas Transmission Ltd. (NGTL) pipeline “that should alleviate some of the pressure that we saw this last summer.”

Pricing improvement will depend, however, on the cadence of production growth in Western Canada as well as the weather, he noted. “But with the expansion of the system, we’re optimistic that we won’t have a repeat of…very limited periods of weakness in the summer.”

Bibby explained that “our plan around that is just to make sure that we’re selling as much gas as we can into the U.S. when there’s periods of congestion at AECO.”

Arc’s Montney gas production, vigorously marketed across Canada and the United States with long-term trading and storage plans, fetched an average realized price of $9.29/Mcf in 3Q2022, nearly doubling its $4.67 a year earlier.

Earnings climbed through the third quarter, allowing increased payments for stockholders in its horizontal drilling and hydraulic fracturing operations in Alberta and British Columbia. Shareholder dividends were $76.7 million in the quarter, and are scheduled to climb again as 2023 begins.

However, stockholder payments are pale compared to a continuing share buyback program. Since the start of the year, Arc poured $981 million into share buybacks. Since launching the program in 2021, Arc has put $1.3 billion into the program.