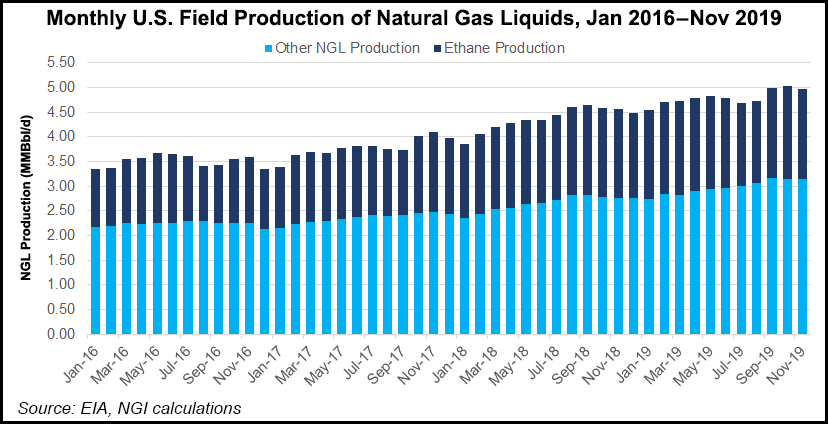 The largest unconventional nonassociated gas field in the country, Jafurah contains an estimated 200 Tcf “of rich raw gas, which will provide a valuable feedstock for the petrochemical industries,” the state-owned oil behemoth said.

Aramco, by far the world’s largest oil company in output and revenue terms, expects production at the field to start in early 2024, and to reach about 2.2 Bcf/d in sales gas by 2036. Associated with this production would be an estimated 425 MMcf/d of ethane, equal to about 40% of Aramco’s current ethane production.

The national oil company added that it expects the field to produce about 550,000 b/d of natural gas liquids and condensates.

The development plan for Jafurah “is subject to the company’s usual governance process,” Aramco said, adding that it “plans to develop Jafurah in accordance with the highest environmental standards. The company expects that the development…would have a positive financial impact in the long term, which will start to show on the company’s financial results in phases concurrent to the field’s development.”

Aramco has sought to shore up its unconventional gas production in recent years to displace oil-fired power generation and boost the local petrochemicals industry, according to the U.S. Department of Commerce.

To that end, Aramco in 2018 awarded a three-year contract to Houston-based oilfield services giant Halliburton Co. to help Saudi Arabia, which leads the Organization of the Petroleum Exporting Countries (OPEC), develop its unconventional gas reserves.

The IPO was preceded by the first-ever earnings conference call last August, corresponding to the first half of 2019 (IH2019). The company has scheduled its full-year 2019 call for March 16.

Aramco released a set of selected financial figures for 3Q2019, including reported revenue of $217.1 billion and net income of $83.3 billion.

Amid increasing competition for global market share from non-OPEC producers, namely North America, Aramco has sought to expand and diversify its presence abroad and at home in various segments of the oil and gas industry through partnerships and acquisitions.

In Saudi Arabia, Aramco announced in March 2019 the acquisition of a 70% stake in petrochemicals firm Saudi Basic Industries Corp., aka Sabic, for $69.1 billion.