Saudi Arabia Oil Co., better known as Aramco, has struck a $12.4 billion transaction to sell a minority stake in its oil pipeline operations to a consortium led by U.S.-based EIG Global Energy Partners. 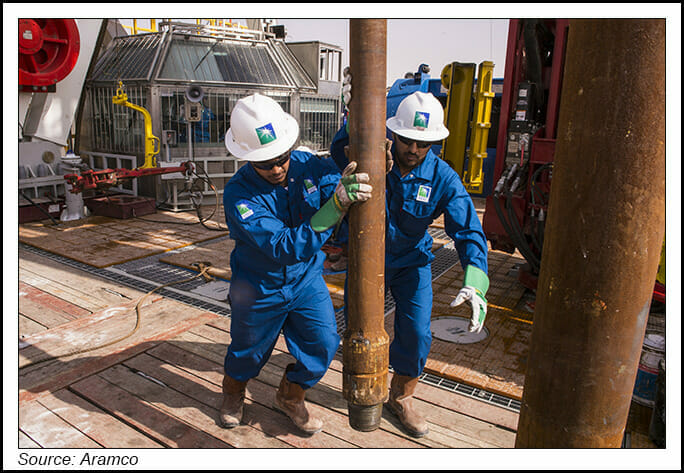 Aramco would hold a 51% majority stake in the pipeline unit, which includes all of the existing and future crude pipelines in the Kingdom; it also transports 100% of the crude produced.

Buying a stake in Aramco is “an extraordinary opportunity” to invest in a “marquee global infrastructure asset,” EIG CEO R. Blair Thomas said.

As part of the transaction with EIG, Aramco agreed to lease the usage rights in its crude pipelines network to Aramco Oil Pipelines. In turn, the pipeline unit would grant back to Aramco the exclusive right to use, transport through, operate and maintain the system during the 25-year period in exchange for a quarterly, volume-based tariff, payable by Aramco.

The tariff would be backed by minimum volume commitments.  Aramco would retain title and operational control of the pipeline network and assume all operating and capital expense risk.

The transaction would not impose any restrictions on Aramco’s actual oil production volumes, which are subject to production decisions issued by the Kingdom. According to Aramco, it produces one in every eight bbl of crude globally.

In 2019 Aramco purchased a 70% stake in the national petrochemicals firm Saudi Basic Industries Corp. for $69 billion, paving the way for investments beyond the Middle East.

Aramco CEO Amin H. Nasser said the “landmark transaction” with the consortium “defines the way forward for our portfolio optimization program. We are capitalizing on new opportunities that also align strategically with the Kingdom’s recently launched Shareek program…Moving forward, we will continue to explore opportunities that underpin our strategy of long-term value creation.”

The Shareek or “partnership” initiative was announced in late March by the Kingdom to diversify the oil-reliant economy. Strict business criteria have been set up to allow private investments in ventures through 2030. Aramco and Sabic are expected to contribute about 60% of the new investments.

“In addition to strengthening our balance sheet, this deal sets a new benchmark for infrastructure transactions both regionally and internationally,” Aramco’s Abdulaziz M. Al Gudaimi, senior vice president of Corporate Development, said. “It is a vote of confidence in our long-term outlook by EIG and other heavyweights in the investment world and reflects the significant progress we are making in our portfolio optimization program. This transaction unlocks value from our assets and strengthens Aramco’s resilience, agility and ability to respond to changing market dynamics.”

The EIG-led transaction was expected to close “as soon as practicable,”  subject to closing conditions, including any required merger control and related regulatory approvals. In its first full year as a public company, Aramco in 2020 reported net income of $49 billion. Its return on average capital employed was 13.2%, the highest in history. Capital expenditures (capex) last year were $27 billion, down from $33 billion in 2019. The company expects spending this year to be around $35 billion, lower than the previous guidance of $40-45 billion.