Domestic natural gas production was a hair more than 2.60 Tcf in April, and production in the first four months of the year reached 10.31 Tcf, a 4.7% increase from 9.85 Tcf in the same period in 2013, according to the Energy Information Administration (EIA). 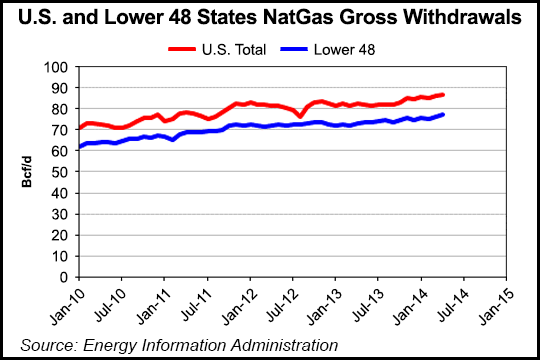 Gross withdrawals of natural gas in the Lower 48 during the month of April increased by 1.3% compared to the preceding month to 77.52 Bcf/d, according to EIA’s latest Natural Gas Monthly report.

Production in the Other States category was 29.64 Bcf/d in April, down 0.15 Bcf/d compared with March “mainly as a result of maintenance and equipment issues,” EIA said, but that was still a whopping 4.85 Bcf/d more than the shale-heavy category produced in April 2013.

The two other categories that reported production declines compared with May — Wyoming (5.39 Bcf/d, down from 5.54 Bcf/d) and Alaska (9.24 Bcf/d, down from 9.65 Bcf/d) — were also lower compared with April 2013 production. Wyoming’s number slipped “primarily because of a gas plant explosion and shutting-in wells in the Powder River Basin,” EIA said.

Shiyang Wang and Christopher Louney, analysts with Barclays Capital Inc., said the EIA’s latest Lower 48 production figures are significantly higher than pipeline flow estimates, and they suggested that EIA may significantly revise its data in the future.

“While we expect natural gas production to continue to exhibit significant growth in May, June production will likely see moderate growth due to widespread pipeline and plant maintenances,” the analysts said. “We continue to expect 2014 to see accelerated growth y/y compared to 2013, but we highlight upside risks to our estimates.”

Winter weather accounted for more than 5 Bcf/d of increased domestic gas demand this past winter, according to Raymond James & Associates Inc. (see Daily GPI, May 27).