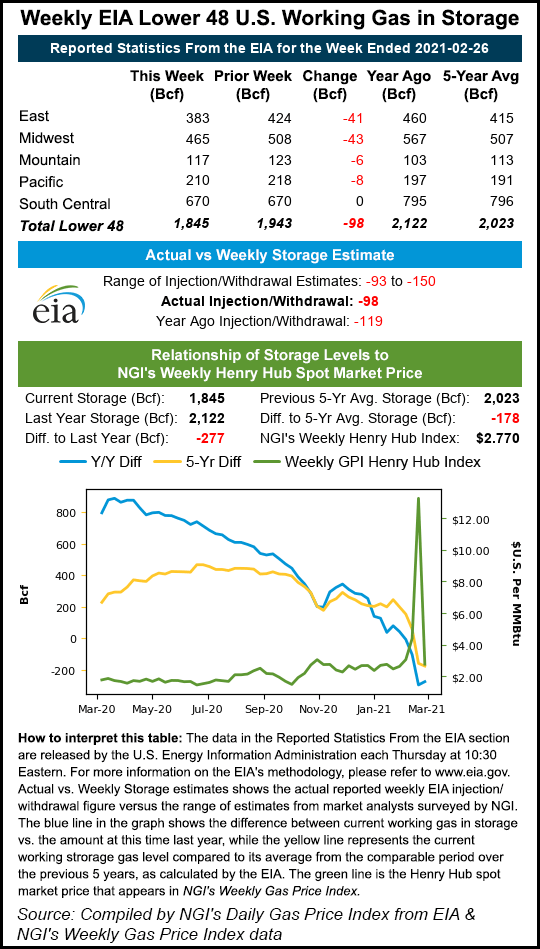 LNG export volumes exceeded 11 Bcf Thursday, NGI data showed, marking a return to near-record levels on strong demand from Asia and parts of Europe. LNG feed gas levels were temporarily muted amid the disruptions imposed in February by the Artic freeze that gripped Texas and threw Gulf Coast energy operations out of sync. They have since recovered and on Thursday were on par with the peak reached during the height of winter in January.

However, production also recovered to the pre-freeze level of 90 Bcf. “Production levels rebounded quickly after most freeze-offs and other cold related impacts resolved just a week after production bottomed out at around 70 Bcf/d on Feb. 17,” Wood Mackenzie analyst Dan Spangler said in a note to clients Thursday.

As markets opened Thursday, NatGasWeather said both the American and European models were essentially unchanged from a day earlier.

“The timing of swings in national demand held, with moderate national demand through Sunday due to a chilly cold shot sweeping across the Great Lakes and East with lows of 10s to 30s,” the firm said. “However, a warm ridge is still expected to set up over the eastern two-thirds of the country next week.”

As a result, the forecaster said, “next week remains solidly bearish/warmer than normal with the lightest demand since last fall.”

Markets, meanwhile, had anticipated a triple-digit withdrawal from underground natural gas stockpiles with Thursday morning’s U.S. Energy Information Administration (EIA) storage report for the week ended Feb. 26. Wintry conditions had persisted across much of the Midwest and East during the week, fueling heating demand.

However, rising temperatures in Texas and elsewhere in the southern United States crimped overall demand. EIA reported a withdrawal of 98 Bcf, far lighter than expectations.

Ahead of the EIA print, NGI’s model estimated a 135 Bcf pull for the covered week. A Bloomberg survey found a median withdrawal estimate of 140 Bcf, while a Reuters poll landed at a median estimate for a 135 Bcf decline in stocks.

The prior week, following the Arctic blast in Texas, EIA posted the steepest pull of the season and the second biggest on record — 338 Bcf. The record 359 Bcf draw was reported by EIA in January 2018.

Withdrawals did prove strong in the Midwest and East — 43 Bcf and 41 Bcf, respectively – but the total was held in check by light demand in the South Central region, which includes Texas.

South Central storage finished the week flat, with a 9 Bcf pull from nonsalt facilities but an increase of 9 Bcf in salts. “It got pretty mild here in Texas very quickly after the freeze,” NGI’s Leticia Gonzales, price and markets editor, noted on The Desk’s online energy platform Enelyst.

Following the divergence between median estimates and the actual storage figure posted by EIA this week, uncertainty reigned looking ahead to the next report, though early consensus gathered around a modest pull.

“Now that weather patterns have turned milder, especially next week, where very comfortable temperatures will rule much of the U.S. for late winter, lighter draws are lining up,” NatGasWeather said.

Spot gas prices on Thursday declined across the Lower 48 along with warming temperatures and unfavorable near-term weather forecasts.

“A mild weather system with showers will track across the Southwest with showers. The rest of the U.S. will be dry and mild with highs mostly in the 50s to 70s, besides 30s and 40s across the far northern U.S.,” NatGasWeather said. “A fresh cold shot will sweep across the East Friday-Sunday with chilly lows of 10s to 30s and highs of 30s and 40s for strong demand, although countered by mild to warm conditions over much of the rest of the U.S., with highs of mid-40s to 70s.”

Next week, the firm added, “upper high pressure will rule much of the U.S.,” with “widespread highs of 50s to 80s for light demand besides the slightly cool and unsettled West.”

Against that backdrop, next-day prices declined in every region of the Lower 48 on Thursday.