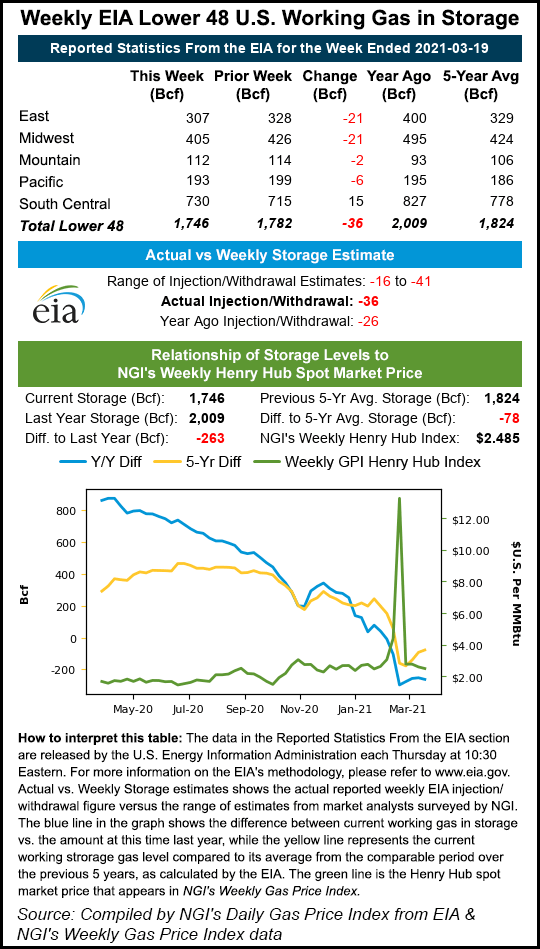 It marked the fourth time in five trading sessions that the prompt month advanced after an otherwise challenging month for futures because of mild weather and fading domestic heating demand.

Cash prices, which have moved in a narrow range of gains and losses this week, traded sideways Thursday. NGI’s Spot Gas National Avg. edged down 1.0 cent to $2.285.

LNG feed gas volumes hovered close to 11.6 Bcf on Thursday, according to NGI estimates, not far from record levels reached earlier in the month and on par with the previous day. Demand for U.S. exports mounted this month after European supplies dwindled over the winter.

Meanwhile, a backlog of ships that continued to mount Thursday around the Suez Canal had yet to have a pronounced impact on LNG prices. Analysts at data intelligence firm Kpler said several LNG tankers were caught in the delays after a massive container vessel ran aground on Tuesday, blocking traffic at the Egyptian canal.

Analysts said if traffic through the channel is held up for several more days, it could affect pricing for LNG, oil and a host of other commodities that traverse the canal to delivery destinations.

The stuck vessel “created the visual definition of a supply route bottleneck, effectively disrupting one of the world’s busiest routes for all commodities,” said Rystad Energy analyst Bjornar Tonhaugen.

Futures also got a boost from the latest U.S. Energy Information Administration (EIA) storage report on Thursday. The agency reported a withdrawal of 36 Bcf from natural gas storage for the week ended March 19, a pull that was steeper than market expectations and the year earlier draw of 26 Bcf.

The latest pull marked the first EIA storage result in a month that was bullish relative to analysts’ median expectations. In prior weeks, production increases outstripped estimates while industrial and residential heating demand levels disappointed.

Prior to the report, NGI modeled a 17 Bcf withdrawal. The median of a Bloomberg survey showed expectations for a draw of 21 Bcf, while a poll by Reuters landed at a median decrease of 25 Bcf. A Wall Street Journal survey produced an average expectation for 26 Bcf pull.

The decrease for the March 19 week lowered inventories to 1,746Bcf. That compared with the year-earlier level of 2,009 Bcf and the five-year average of 1,824 Bcf.

The Midwest and East regions led the decline, with each pulling 21 Bcf from stocks, according to EIA.

The U.S. Department of Labor on Thursday said unemployment claims fell to 684,000 last week. It was the lowest level since the pandemic started and a strong indicator that the economy is gaining momentum, analysts said.

An economic lift this spring would be timely for natural gas, given near-term weather demand is light and projected to remain that way into April.

NatGasWeather on Thursday said both the American and European models remained “quite bearish through this weekend, seasonal next week due to weather systems tracking across the U.S., then back to warm and bearish April 3-8 as upper high pressure rules most of the U.S. with above normal temperatures and very light demand.”

Spot gas prices on Thursday were flat amid light demand and few signs of weather shifting in a bullish direction this week.

The Lower 48 will see a “messy pattern the next few days as numerous weather systems bring showers and thunderstorms, although they’re all rather mild with highs of 40s to 60s,” NatGasWeather said. “The southern U.S. remains comfortable with highs of 60s to 80s, while the Ohio Valley and Northeast will be warmer than normal with highs of 50s and 60s.”

A bump in national demand will not arrive until next week, “when weather systems over the west-central U.S. track across the Midwest and Northeast” with lows ranging from the teens to 30s, the firm said.

Against that backdrop, price action Thursday was limited, with small gains and losses across most regions.

Overall, the outlook remains bearish for the rest of March and early April, with net heating degree days over the next two weeks forecasted to fall below normal.