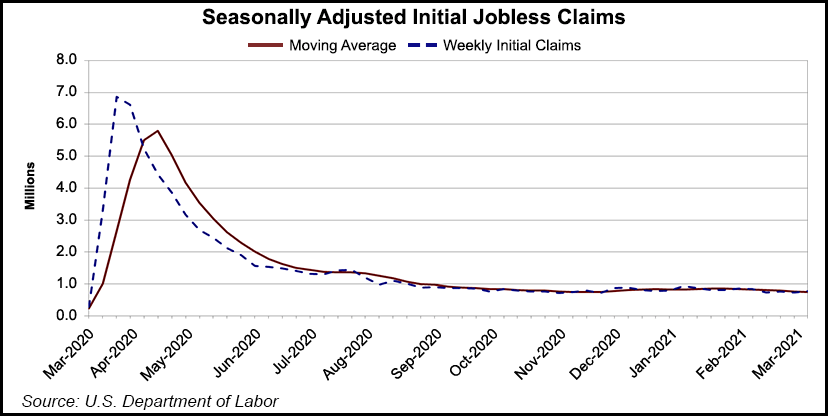 It marked the second time during the trading week the prompt month advanced, but only the third gain over the past 13 sessions as traders have fixated on waning heating demand and modest storage pulls. Forecasts for the week ahead called for generally mild conditions and modest demand for natural gas.

The outlook remains “in a generally lower than normal demand state, heading into a time of year where demand is of course lower anyway,” Bespoke Weather Services said.

Asian demand for U.S. exports was strong throughout the winter and now, heading into spring, European demand is mounting as storage levels on the continent dwindled substantially in recent months.

“Since Winter Storm Uri resulted in reduced outages and gas conservation for residential use in Texas, LNG demand has risen 10.0 Bcf/d in the past month,” Weissman said. “Further demand gains are possible — perhaps even eclipsing 12.0 Bcf/d if all terminals achieve maximum demonstrated demand levels at the same time. Gains in LNG feed gas and Gulf Coast industrial demand for natural gas this week may help offset declines in weather-driven demand, allowing small withdrawals to continue near term.”

He and other analysts said the market could be surprised to the upside with the next U.S. Energy Information Administration (EIA) storage report on Thursday – after three straight bearish inventory assessments.

EIA reported a withdrawal of 11 Bcf from natural gas storage for the week ended March 12, shy of market expectations and well off the five-year average withdrawal of 59 Bcf for the comparable week. Polls predicted a pull in the range of 16-22 Bcf for the week. Analysts missed by even greater margins with the two prior storage reports as production recovered faster than demand – and faster than expected – after the Texas freeze.

“Compared to gas-weighted degree days and normal seasonality, this week’s reported withdrawal appears loose by approximately 3.7 Bcf/d versus the prior five-year average,” Wood Mackenzie analyst Eric Fell said Friday. “It was the third very loose stat in row but a bit tighter than the previous two weeks.

“Weak industrial demand has been a major driver of the looseness over the last three weeks as a significant amount of refining/petrochemical related demand that went offline due to the polar vortex remained offline much longer than the production freeze-offs,” Fell added. “Weather-adjusted supply and demand balances should tighten up…as refinery/petrochemical demand normalizes.”

Analysts at Tudor, Pickering, Holt & Co. (TPH) called the latest EIA result a “stinker” but said “we expect a bullish print next week, with early modeling pointing to a draw of around 50 Bcf versus the five-year average of 31 Bcf.” The analysts cited LNG demand as a key strength.

Meanwhile, analysts and investors are increasingly upbeat about the U.S. economy, with coronavirus vaccination levels mounting and business restrictions easing. Another massive round of government stimulus – including direct payments to a majority of American households – is expected to fuel new spending.

The four-week moving average of jobless claims was 746,000 for the March 12 week, near the pandemic low in November, according to the U.S. Department of Labor. Employers added 379,000 jobs in February.

He noted that the Federal Reserve Bank this month increased its U.S. gross domestic product estimate for 2021 to 6.5% from a previous forecast of 4.2%.

Spot gas prices fell on Friday as comfortable temperatures spread across much of the country and heating needs dissipated.

A majority of hubs in every region posted declines, led lower by steep drops in the Northeast.

Weather-driven demand may do little for cash prices in coming days.

NatGasWeather’s Friday forecast showed highs in the 60s to 80s across much of the Lower 48 for the week ahead, with conditions slightly cooler over the Mountain West and Plains amid rain showers.

“Light national demand is expected” throughout the week, the firm said.

Meanwhile, even though the Atlantic hurricane season is months away, the World Meteorological Organization’s (WMO) hurricane committee said it decided at a recent meeting that the Greek alphabet would not be used in the future because “it creates a distraction” from storm warnings and “is potentially confusing.”

The change followed a record 2020 hurricane season that was so active the WMO’s 21-name rotating list was exhausted and the Greek alphabet was used for only the second time (the first was in 2005). Officials said since the Greek names are so rarely needed, when they are used people in many countries find their use confusing.

“Impacts from a single storm can affect multiple countries, so it is critical we have a plan, coordinate our efforts” – and make changes as needed, said Ken Graham, who chairs the WMO hurricane committee and is also U.S. National Hurricane Center Director.

The hurricane committee agreed to a new supplemental list of Atlantic tropical cyclone names in lieu of using the Greek Alphabet.

The WMO also said it retired Dorian (2019), Laura, Eta and Iota (2020) from the rotating lists of Atlantic tropical cyclone names because of the death and destruction they caused. In total, WMO said, 93 names have now been retired from the Atlantic basin list since 1953, when storms began to be named under the current system.