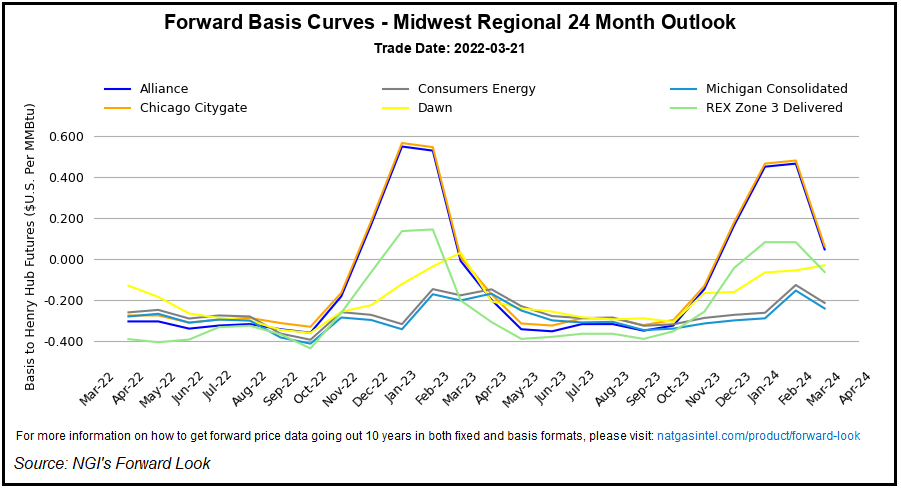 The weather outlook on Tuesday shifted from decidedly bearish for natural gas demand to closer to seasonal for the final stretch of March and the beginning of next month.

“It is basically a normal pattern from this weekend on into the early part of April, with a good deal of variability across the nation,” Bespoke Weather Services said.

EBW Analytics Group said the variability could come in the form of cooling across the Northeast. That could add “late-winter heating demand at the same time warmer temperatures across the southern tier of the country stimulate early-season cooling demand.”

However, Rubin added, “heavier maintenance during the spring shoulder season could lead to further variation and potential downside over the next 30-45 days.”

Domestic fundamentals noted, Rubin said demand for LNG exports amid supply shortages in Europe during Russia’s invasion of Ukraine continues to drive bullish market sentiment. LNG volumes held around 14 Bcf early this week, according to NGI estimates. Those record volumes eclipsed the high-13 Bcf level that many in the industry thought was the U.S. capacity.

“The ceiling for U.S. LNG may be higher than widely recognized,” Rubin said.

LNG feed gas volumes have hovered above 13 Bcf for most of the four-week Russia-Ukraine conflict.

A Prolonged War In Ukraine?

Market participants have worried Russian natural gas exports to Europe could be interrupted amid pipeline damage from bombings or because of intensifying Western sanctions.

Europe relies in part on Russian gas delivered through Ukraine, though the continent has vowed to wean itself of Kremlin-backed supplies. This escalated already strong demand for American LNG following a winter in which Europe cut deeply into its gas in storage.

What’s more, the United States banned imports of Russian energy earlier this month. The European Union (EU) levied a series of harsh economic sanctions against Russia. It was considering a ban on Russian oil on Tuesday, The Wall Street Journal reported, as EU members increased their protests of the war. The UK already implemented an embargo on Russian crude.

Germany invited other EU leaders to a meeting in Brussels on Thursday. The meeting is to be held alongside President Biden’s discussions with leaders of the North Atlantic Treaty Organization on how to further counter Russia’s assault on Ukraine.

In a Monday evening speech, Biden said the mounting sanctions had crippled Russia’s economy. He also emphasized, though, that Russian President Vladimir Putin showed no signs of backing away from aggression in Ukraine and may instead intensify the battle. This, the U.S. president suggested, may point to a prolonged conflict.

For the oil and gas sector, ClearView Energy Partners LLC noted the potential of Russian cyberattacks on energy infrastructure in Europe “at a time of lean inventories.” The analysts see further “upside risk to energy prices” and said “energy-relevant instabilities continue to emanate” from the conflict.

With the war raging and LNG demand lofty, markets will soon turn to the U.S. Energy Information Administration’s (EIA) weekly storage report, slated for release at 10:30 a.m. ET Thursday, to gauge the impact on domestic supplies.

Bespoke noted that supplies are already light relative to historic norms following bouts of severe cold this past winter and robust demand for exports. Should the summer prove exceptionally hot and LNG demand remain elevated, the firm said producers may have to ramp up from current levels to ensure U.S. utilities can inject ample supplies into storage ahead of next winter.

National Weather Service (NWS) data showed mild temperatures permeated much of the Lower 48 on Tuesday. However, a strong thunderstorm system pushed through the Plains and Texas, delivering snow in the North and severe wind gusts and tornadoes in the South.

Texans on Tuesday were grappling with widespread power outages. At one point in the day, more than 60,000 properties in the Lone Star State had lost power, according to PowerOutage.US.

The powerful system in the nation’s midsection was expected to push to the East by Wednesday, presenting the potential for more late-season heating demand – as well as property damage — amid strong and possibly cold winds.

“Moisture from the Gulf of Mexico surging across the southern U.S. is one of the key ingredients in this week’s severe weather threat, but it could also lead to an additional danger,” said AccuWeather’s Brian Lada. “The influx of moisture will fuel heavy downpours with the thunderstorms that develop, and with thunderstorms that produce tornadoes, the downpours could act as a veil making it extremely difficult to see the twister.”

Another blast of chilly weather, with sub-freezing lows, was forecast to spread from the Midwest to the Northeast over the course of the coming weekend. NWS said this could usher in lows in the 20s.

Ahead of the looming weather fronts, prices in the Northeast also climbed on Tuesday, with Iroquois Zone 2 spiking 58.5 cents to $5.175.