Natural gas futures on Thursday lost ground for the sixth time in seven sessions after the latest federal inventory report disappointed for a second straight week and forecasts called for easing weather demand. 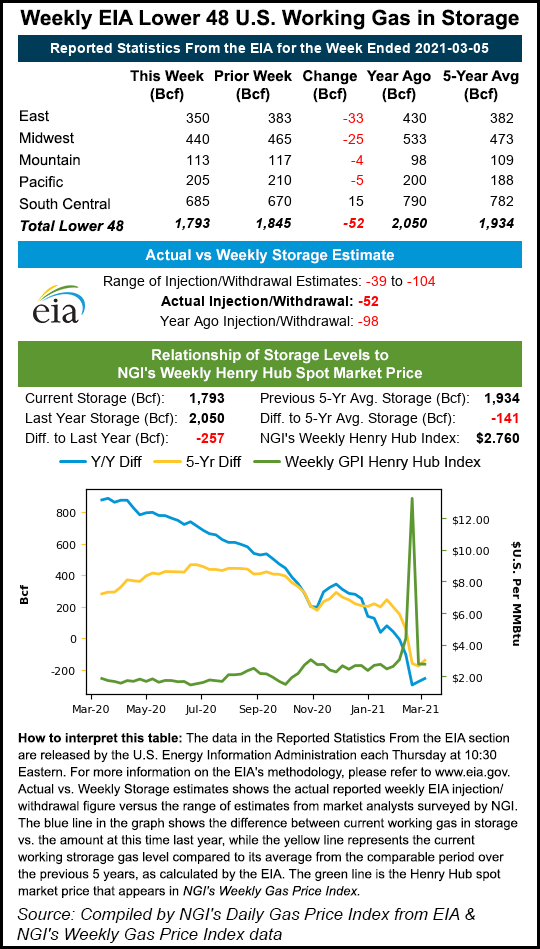 The U.S. Energy Information Administration (EIA) on Thursday reported a withdrawal of 52 Bcf from natural gas storage for the week ended March 5. The result was notably shy of expectations set by analysts ahead of the report.

A Bloomberg survey showed respondents predicting a median 78 Bcf withdrawal, while a Reuters poll landed at a median decline in stocks of 76 Bcf. NGI’s model predicted a 104 Bcf pull. A year earlier, EIA recorded a 72 Bcf withdrawal for the period, and the five-year average is a pull of 89 Bcf.

“It was warmer than normal over much of the U.S.” during the covered week, hindering heating demand, NatGasWeather said.

Still, the firm noted that colder temperatures in the Northeast and parts of the West, coupled with stronger liquefied natural gas (LNG) exports, were expected to fuel enough demand to muster a storage pull in the 70s Bcf.

The latest report follows a “stunning” miss a week earlier, the firm noted. Utilities pulled 98 Bcf from storage in the week ended Feb. 26, well off market expectations for a withdrawal in the 130s-140s Bcf.

“This week’s bearish miss confirmed weaker demand that carried over from last week’s report instead of prospects for a correction to it,” NatGasWeather added. “This suggests next week’s draw will be near 20-25 Bcf, if not lower and closer to 10 Bcf.” While production and LNG feed gas “have recovered to pre-Arctic blast levels, demand hasn’t.”

Indeed, after falling to near a 1 Bcf low amid the harsh freeze that enveloped Texas in mid-February, LNG feed gas volumes hovered around or above 10 Bcf for most of the March 5 week – near pre-storm levels.

However, a simultaneous rebound in production appeared to offset LNG momentum. Production increased by 6 Bcf/d during the covered week as South Central freeze-offs lifted and power outages returned after the February storm, Wood Mackenzie analyst Eric Fell said. He added that total residential and commercial demand was 6.9 Bcf/d lower than the previous week, as temperatures climbed in the Midwest.

“Production’s rapid recovery has been the big surprise for the market,” analyst Dan Myers of Gelber & Associates said on The Desk’s online energy platform Enelyst. “On the demand side, it appears to have taken longer to normalize than many folks thought.”

He cited sluggish industrial demand as a key culprit – on top of the dip in residential and commercial.

“Demand is certainly still struggling,” Myers said, adding “the next couple of storage reports will be telling.”

Several participants on Enelyst predicted an even smaller draw with next week’s report. The Bespoke Weather Services model on Thursday showed a preliminary estimate for a pull of 5 Bcf for the week ending March 12.

Weather has proven generally mild during the current week. The outlook for the second half of March does not show much to support a bull case for coming weeks either.

Bespoke said its forecasts for the next two weeks skews “to the warmer side of normal as a whole.” Looking farther ahead, “most of the pattern signals continue to show a warmer-than-normal lean toward the end of March and into the month of April, which would be bearish for overall demand.”

The decrease in storage for the March 5 week reduced inventories to 1,793 Bcf, compared with the year-earlier level of 2,050 Bcf and the five-year average of 1,934 Bcf.

The South Central was the only region to report an increase in stocks with an injection of 15 Bcf.

Next-day cash prices inched ahead thanks to small gains in the nation’s midsection, where sporadic rains and modestly cooler temperatures moved in late Wednesday and into Thursday.

Weather demand looks spotty for the rest of this week and beyond.

NatGasWeather said the cold shot that moved in the northern Plains at mid-week is expected to sweep across the Great Lakes and Northeast this weekend, bringing chilly lows of 10s to 30s. A separate system is forecast to track from the Southwest into the Rockies and Plains over the weekend, with heavy rains in some areas and fresh snow in others.

However, the firm said, “a milder break with highs of 50s to 70s will set up over the eastern half of the U.S. next week,” minimizing heating demand. By March 21-24, “much of the U.S. will be mild to warm with highs of 40s and 60s across the northern U.S. and 60s to 80s across the southern U.S. for light demand.” Across most of the East and West on Wednesday, spot prices were essentially flat or down slightly. Among the exceptions were a few hubs in California, where SoCal Citygate advanced 9.5 cents to $3.525 and SoCal Border Avg. climbed 7.0 cents to $2.840. 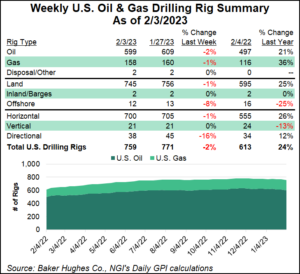