Natural gas futures drifted lower for a third consecutive session on Friday as mild fall weather and a heaping of uncertainty created by an exceptionally bearish government inventory report countered optimism about export momentum and the trajectory of the U.S. economy. 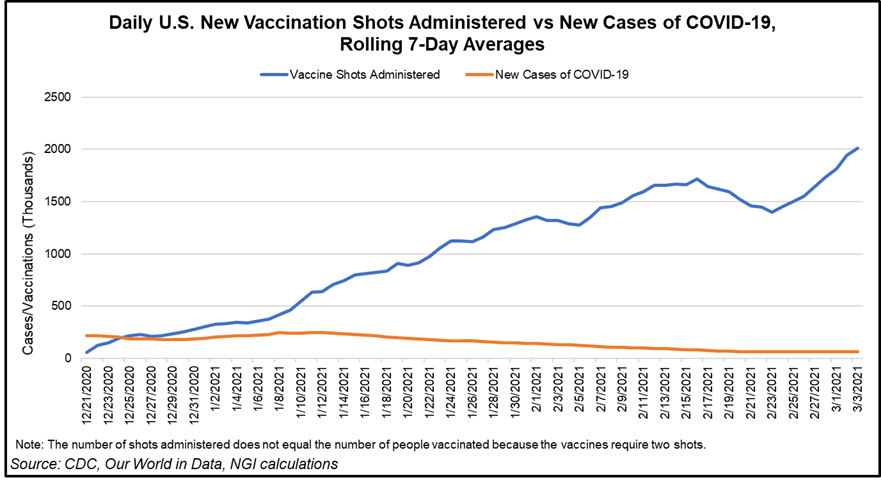 Liquefied natural gas (LNG) export levels on Friday topped 11 Bcf, hanging near record levels after rebounding from the interruptions imposed by the Arctic storm and frigid temperatures that derailed the Texas energy sector in February. LNG feed gas volumes had plunged to near 1 Bcf at the mid-February low.

LNG exports have “fully recovered from freeze-off disruptions in February and remain priced to operate near capacity throughout 2021 and beyond,” Goldman Sachs analysts said Friday.

New signs of stronger domestic economic growth could also fuel more commercial and industry activity – and, by extension, demand for natural gas from those sectors.

Mike Gibbs, a managing director at Raymond James & Associates, said following economic contraction in 2020 amid the pandemic, the combination of federal stimulus programs and vaccine rollouts should lead to strong growth in U.S. gross domestic product (GDP) in 2021.

U.S. GDP growth has not exceeded 5% since 1984, Gibbs noted Friday, “and we believe 2021 could be closer to 6% if our expectations on the economic reopening and fiscal stimulus come to fruition.”

He cited pent-up consumer demand for everything from routine entertainment to vacation travel as well as an expectation for Congress this month to pass a $1.9 trillion stimulus package that includes direct payments to American households.

Bespoke Weather Services said comfortable weather and light heating demand are to permeate most of the Lower 48 in the coming week.

Friday forecasts included “incremental warmer changes, as mid to late next week moves even warmer, not far from record warm levels” in terms of gas-weighted degree days, the firm added. Conditions “should make it more difficult for weather to really move the needle” as far as “overall sentiment in the natural gas market.”

This will leave the traders “wrestling” with EIA’s latest inventory data, Bespoke said.

“There remains some confusion in play in the wake of that wild EIA report” on Thursday “as folks try to determine if such a huge bearish miss means something moving forward or was a random one-off,” the firm said.

The EIA on Thursday reported a 98 Bcf withdrawal from U.S. gas stocks for the week ended Feb. 26. Analysts had estimated a pull well into the triple digits, given cooler conditions across much of the Midwest and East during the covered week.

Ahead of the EIA report, NGI’s model estimated a 135 Bcf withdrawal. A Bloomberg survey found a median decrease estimate of 140 Bcf, while a Reuters poll landed at a median estimate for a 135 Bcf decline in stocks.

“Most data sets have a few outliers, and it appears the EIA delivered one on Thursday,” analysts at Tudor, Pickering, Holt & Co. (TPH) said Friday, noting that the covered week immediately followed the Texas freeze. “Some noise was expected given the storms in the U.S. and the knock-on impacts to supply, exports, and power generation.”

That noted, the TPH analysts said the EIA print indicates supply recovering more quickly than demand, with power generation “being the slowest to return to prior levels.”

Spot gas prices on Friday declined across the country as temperatures rose.

National Weather Service reports showed dry conditions and comfortably warm temperatures across most of the Lower 48 Friday, with highs of 50s in the Upper Midwest and 70s over much of the South and West.

The Northeast was the exception and was expected to remain so into the weekend, with highs in the 30s and lows in the teens for much of the region. However, after surges earlier in the week, Northeast prices also retreated Friday.

Prices were lower across all other regions as well, though most hubs were off only a few cents.

Dominion Energy Cove Point in the Southeast declined 7.0 cents to $2.790.

However, he added, “flows over the past few days are the highest ever seen at the facility.”