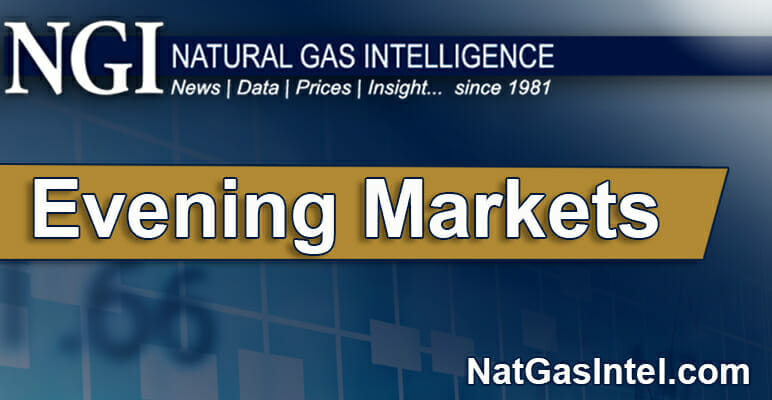 Futures opened trading in the green on Tuesday and gained strength through the session. Mild weather is widely anticipated much of next week across the Lower 48, but forecasters noted the potential for cooler conditions the following week that could inject a dose of heating demand before spring settles in for good.

Though above normal temperatures are still anticipated, projections for the March 12-16 time frame trended colder for the eastern two thirds of the Lower 48 early Tuesday, Maxar’s Weather Desk said. This change is “echoed among the various models over the past 24 hours,” the forecaster said.

Production, meanwhile, hovered around 86 Bcf as trading got underway Tuesday, still well below the roughly 90 Bcf level reached prior to the paralyzing winter freeze that gripped Texas in mid-February. The U.S. Energy Information Administration (EIA) estimated that natural gas production in Texas dropped nearly 45% during the week ended Feb. 13, hitting a low of 11.8 Bcf/d on Feb. 17. It is gradually recovering.

LNG feed gas volumes, meanwhile, hovered close to 10 Bcf Tuesday after exceeding that threshold earlier in the week. The Texas cold snap had also hampered LNG activity in February, with volumes falling to near 4 Bcf. However, exports recovered notable ground last week and have approached 10 Bcf most days since Feb. 23.

LNG feed gas “demand reached a three-week high” of 10.5 Bcf/d at the start of this week, “as demand returned in the wake of the mid-February deep freeze,” EBW Analytics Group said.

There is plenty of room for growth, however, EBW added. At maximum levels, “total feed gas demand could surpass 12.25 Bcf/d — representing a potential upside catalyst for natural gas later this year,” the firm noted Tuesday.

Looking ahead to EIA’s storage report Thursday, a preliminary Bloomberg survey showed analysts expecting another pull from underground stocks, though much lighter than the prior week.

The survey showed analysts estimating withdrawals ranging from 136 Bcf to 150 Bcf and a median of 148 Bcf. That would follow the season high reduction of 338 Bcf reported a week earlier – the second-largest withdrawal on record amid the frigid Arctic conditions that devastated Texas and fueled robust demand across the nation’s midsection.

The decline brought stockpiles below the five-year average.

“The massive withdrawals were driven by the cold snap that hit the central U.S., and regional withdrawals reflect the areas hit hardest by the cold and the deliverability of facilities,” said Wood Mackenzie analyst Dan Spangler.

Analysts at Energy Aspects estimated an end-March carryout of 1.50 Tcf, assuming normal weather for the second half of March.

“A 10% warmer-than-normal scenario to end March would provide upwards of an 80 Bcf cushion to our 1.5 Tcf carryout estimate,” the analysts said. “Residential/commercial demand would be 3.7 Bcf/d lower on average…Should weather realize somewhere in between 4% and 10% warmer than normal, we expect our end-March estimate to grow to at least 1.55 Tcf.”

Next-day prices on Tuesday advanced across most of the Lower 48, but a plunge in the Northeast dragged down the national average.

A day after surging amid a brief bout of late winter chill, Northeast prices retreated along with fading cold. After falling into the 20s early Tuesday, high temperatures in Boston, for example, were rising and expected to climb into the high 40s by Wednesday.

If weather forecasts bear out, prices could swing again.

NatGasWeather, in a midday update, said Tuesday it anticipated “moderate national demand through this weekend due to several weather systems impacting the U.S., especially a chilly one over the East/Northeast late this week and this weekend with lows of 10s to 30s.”

However, the firm added, “a warm ridge is still expected to set up from over the eastern two-thirds of the country next week, with highs of 70s and 80s over Texas, the South, and Southeast, and quite comfortable 50s to lower 60s from Chicago to New York City. This March 8-13 period still stands out as solidly bearish/warmer than normal” even after the domestic weather model shifted cooler from a day earlier, adding several heating-degree days.

However, TCO expected the impact on service to prove limited and minimal.