The U.S. Energy Information Administration (EIA) on Thursday reported a withdrawal of 36 Bcf from natural gas storage for the week ending March 19. The pull was steeper than market expectations, boosting Nymex futures. 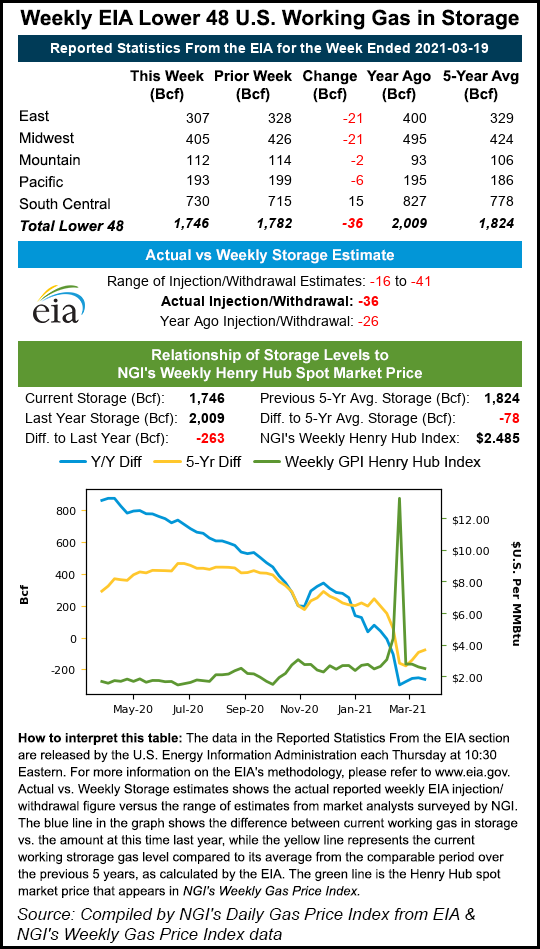 “It was cooler than normal over areas of the West, Plains and New England” during the EIA report period, according to NatGasWeather, which had forecast a 28 Bcf pull.

The latest draw marked the first EIA storage result in a month that was bullish relative to analysts’ median expectations. In prior weeks, production increases outstripped estimates while industrial and residential heating demand levels disappointed.

“I think it signals big improvement,” one participant on The Desk’s online energy platform Enelyst said of the latest pull. Versus the storage number Thursday, there was a 26 Bcf draw in the year-ago period and a five-year average withdrawal of 51 Bcf.

Prior to the report, NGI modeled a 17 Bcf withdrawal. The median of a Bloomberg survey showed expectations for a draw of 21 Bcf, with responses ranging from pulls of 14 Bcf to 39 Bcf.

The weekly poll by Reuters found pull estimates from 16 Bcf to 41 Bcf, with a median decrease of 25 Bcf. Respondents to a Wall Street Journal survey reported withdrawal estimates that spanned 14 Bcf to 33 Bcf and averaged 26 Bcf.

The decrease for the March 19 week lowered inventories to 1,746 Bcf, compared with the year-earlier level of 2,009 Bcf and the five-year average of 1,824 Bcf.

The Midwest and East regions led the decline, with each pulling 21 Bcf from stocks, according to EIA. Pacific region inventories declined by 6 Bcf, while Mountain stocks declined by 2 Bcf.

South Central storage increased by 15 Bcf due to an 18 Bcf injection into salt facilities. Nonsalt storage in the region decreased by 4 Bcf. EIA noted that totals may not equal the sum of components because of independent rounding.

Looking ahead to next week’s EIA report, analysts on the Desk were generally expecting the result to mark the onset of injection season, given mild temperatures and waning heating demand across much of the Lower 48.