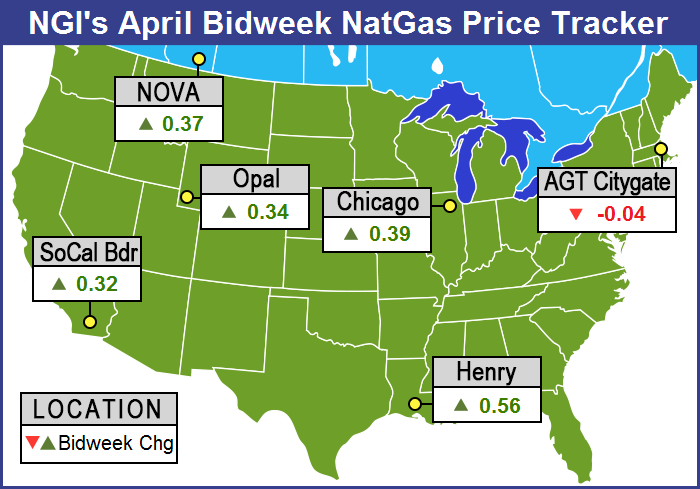 The NGI National Bidweek Average vaulted higher by 49 cents to $2.92, and all but a handful of points were deep in the black, typically by double-digits. March bidweek quotes last month suffered a $1.03 drubbing to $2.43.

The individual point showing April bidweek’s greatest gain was Tennessee Zone 4 Marcellus 313 Pool, with a gain of 70 cents from March to $2.74, and Algonquin Citygate brought up the rear with a modest 4-cent decline to $3.24.

Rockies bidweek quotes improved the least on a regional basis, adding 29 cents to average $2.58, while Appalachia was atop the leaderboard with a 63-cent advance to average $2.71.

April natural gas futures expired Wednesday at $3.175, up a stout 54.8 cents from the March contract settlement. The now spot-month May contract settled Friday at $3.190, up 3.7 cents on the week.

“Bidweek trading allows you to set up your prices that won’t change during the month unless you have a view of the marketplace,” said a Midwest marketer trading Midwest and Chicago Citygate delivery points. “If you are a company that takes market positions, then you might be buying to be long the market at a fixed price.

“You will see groups going one way or the other, with heavier sellers if it’s a typical down month, or the month before was down, or if things haven’t changed in the marketplace to justify the market going up. Likewise, you will see a big flip to everyone buying if the market is heading up and nothing has changed.”

Said the marketer, “I think there were a number of companies coming in buying. We all have short memories, and if you look at last year, April and May were the cheapest months. So if you are injecting for storage you want to inject as much as you can to start the year out.

“It used to be that historically, people waited to the end of the season, September or October, to start injecting gas because those were the cheapest months. Short memory this year means you buy as much as you can to start because it’s going to trade up as the summer progresses.”

The marketer expects to see “trade up as the summer goes through. Technically, you have support in the marketplace. You might go a little bit below this $3 mark for a little bit, but as you look at this month relative to the rest of the summer you will be up from here.

“If Nymex trades up it tends to get people buying.”

May futures inched lower Friday, but overall for the week the contract managed a 3.7 cent gain to $3.190.

“We had some purchases we liked, and some we didn’t,” said a Great Lakes marketer. “We were getting basis quotes of flat and -4.5 cents on Consumers.”

In last Thursday’s trading, physical natural gas for Friday delivery moved little as traders got their deals done ahead of the release of Energy Information Administration (EIA) storage data. Trading was lackluster and only a handful of points moved more than a few pennies either side of unchanged. The NGI National Spot Gas Average was unchanged at $2.89. In the futures arena things momentarily got a little crazy when the EIA released storage data at 10:30 a.m and May futures took an immediate plunge to the low of the day at $3.141.

Within a minute, however, trading stabilized and prices had returned to pre-report levels. At the close last Thursday May had given up 4.0 cents to $3.191 and June was lower by 4.2 cents to $3.257. May crude oil continued its recovery and added 84 cents to $50.35/bbl., the first settlement of spot crude oil above $50 in three weeks.

The EIA reported a 43 Bcf storage withdrawal for the week ending March 24 in its 10:30 a.m. EDT release on Thursday, about in line with industry estimates, but that was little consolation to traders who interpreted the number as bearish and sold only to have the market come bouncing back.

Prior to the release of the data, Kyle Cooper of ION Energy was looking for a withdrawal of 46 Bcf and a Reuters survey of 20 industry cognoscenti revealed a 42 Bcf average with a range of -28 Bcf to -55 Bcf.

During the same week last year 19 Bcf was withdrawn, and the five-year pace stands at a 27 Bcf decline.

Traders were not optimistic that last Wednesday’s settlement would be exceeded. “If traders can hold the market at $3.18 to $3.19, they will probably close it against this [$3.21] level, but probably not taking out $3.23 to $3.24 area,” said a New York floor trader.

“The 43 Bcf net withdrawal was in line with consensus expectations for a 42-43 Bcf draw but supportive relative to the 27 Bcf five-year average for the date,” said Tim Evans of Citi Futures Perspective. “The report was also supportive relative to our model’s 37 Bcf estimate and so does imply either a tighter balance between supply and demand or perhaps just some greater than anticipated carryover of demand from the prior week.”

Harrison NY-based Bespoke Weather Services said, “The number indicates that the market is a bit more balanced at these levels, and does not appear to provide a direct catalyst either higher or lower. It does seem to confirm the minor loosening of the last two weeks but that trend has not as clearly continued.”

Inventories now stand at 2,049 Bcf and are 423 Bcf less than last year and 250 Bcf more than the five-year average. In the East Region 31 Bcf was withdrawn, and the Midwest Region saw inventories decrease by 20 Bcf. Stocks in the Mountain Region were up 4 Bcf, and the Pacific Region was up 4 Bcf as well. The South Central Region was unchanged.

In last Friday’s trading, physical gas for April delivery over the weekend and Monday, for the most part, managed to hold its own, despite forecasts for lower energy usage.

Most market points outside the Northeast traded within a few pennies of unchanged, and in New England double-digit gains were noted as temperatures over the weekend were forecast to start the weekend well below normal.

The NGI National Spot Gas Average rose 3 cents to $2.93. May futures opened strong and made a valiant attempt to reach new high territory, but at the end of the day had to settle for a nominal setback. At the close, May had eased one-tenth of a cent to $3.190 and June had given up three-tenths of a cent to $3.254.

Points in New England posted gains for weekend and Monday delivery, and in the Mid-Atlantic quotes held firm although energy usage was forecast to decline. ISO New York forecast that peak load Friday of 18,362 MW would recede Monday to 18,007 MW and peak load across the PJM grid was expected to fall from 33,701 MW Friday to 30,662 MW Monday according to figures from PJM Interconnection.

Most major trading centers posted gains. Gas onDominion South added a couple of pennies to $2.81, but deliveries to theChicago Citygate fell 6 cents to $2.94. Gas at theHenry Hub gained 3 cents to $3.10.

Technical analysts were scratching their heads trying to figure out if Thursday’s 4-cent setback in the May contract may signal a market top.

Gas buyers responsible for purchases for power generation across the MISO footprint may not have had much in the way of wind generation available over the weekend.

Tom Saal, vice president at FCStone Latin America LLC in Miami, in his work with Market Profile said to look for the market to test Thursday’s value area at $3.221 to $3.185. “Maybe” the market will test the week’s 100% breakout target at $3.286, he said in a morning report.