The Marcellus Shale is still powering natural gas production increases, as reported by the Energy Information Administration (EIA), even though the agency continues to lump main Marcellus state Pennsylvania into the “other” category in its monthly production report. 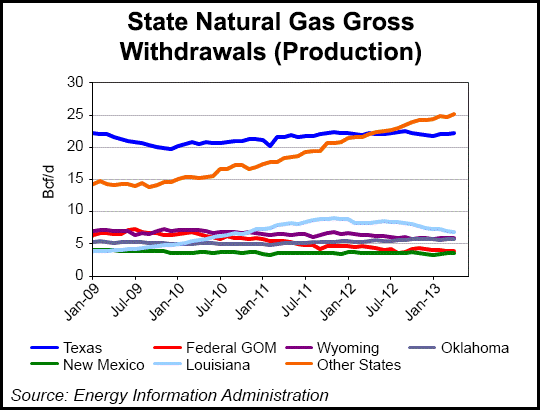 Lower 48 gross natural gas production during April increased 0.8% (0.57 Bcf/d) to 73.24 Bcf/d from a revised March figure of 72.67 Bcf/d, the U.S. Energy Information Administration (EIA) said Friday. In a separate report, EIA said overall April dry gas production set a record for the month, although it was “a small increase” from April 2012.

The latest Lower 48 gross production figure for April represents an increase of 1.27% (0.92 Bcf/d) from one year ago.

The “other” states category (which excludes Louisiana, New Mexico, Oklahoma, Texas, Wyoming, Alaska and the federal offshore Gulf of Mexico) had the largest volume increase at 1.9% (0.47 Bcf/d) as several operators reported new wells in the Marcellus and Niobrara shales, EIA said in its Monthly Natural Gas Gross Production Report.

Texas and New Mexico both had increases of 0.5% (0.11 Bcf/d) and 2.8% (0.10 Bcf/d), respectively, as new wells were brought online. The Gulf of Mexico also contributed to the increase in Lower 48 with a 1.6% (0.06 Bcf/d) increase as maintenance and pipeline issues from previous months were resolved. Oklahoma production increased 0.9% to 5.8 Bcf/d.

In its Natural Gas Monthly for June, also released Friday, EIA said dry gas production for April was 1.985 Tcf (66.2 Bcf/d), which is the highest on record for the month and marks “a small increase” from April 2012’s 1.963 Tcf (65.4 Bcf/d). Total consumption of natural gas for April was 1.946 Tcf, the second highest consumption on record for the month but a slight decrease from April 2012’s record-setting 1.956 Tcf, EIA said.

EIA is considering breaking out monthly gas production data for several individual states currently lumped together into the “other” category to reveal more precisely production coming out of shale plays (see Shale Daily, April 3). The Marcellus Shale covers parts of Pennsylvania, West Virginia, Ohio and New York, and it is considered to be the most productive shale gas basin in the country. The great bulk of production from the formation is in Pennsylvania. Shale production is also booming in Texas and North Dakota.