Natural gas forward prices for April averaged 2 cents higher from Feb. 23 to March 1 as March comes roaring in like a lion, with several cold snaps following a mostly mild February, which could perhaps lead to heftier storage withdrawals in the coming weeks, according to NGI’s Forward Look. 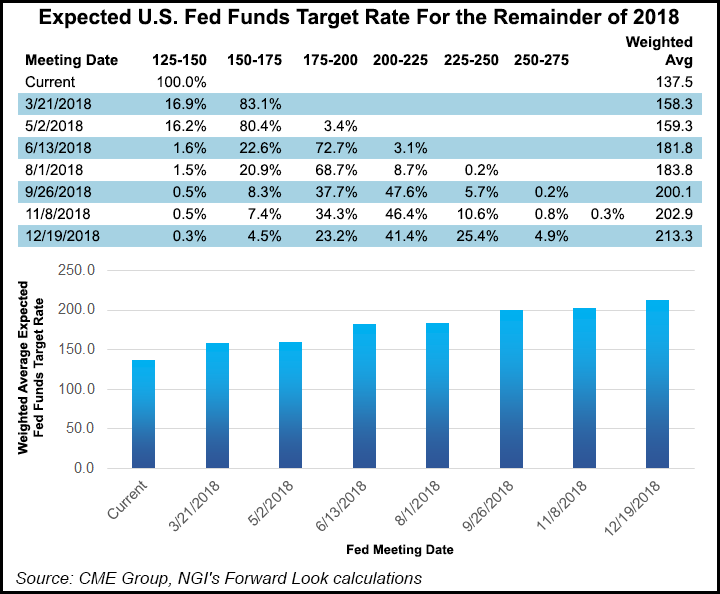 New England markets, however, fell by the double-digits despite a weather system that was expected to bring heavy rains, gusty winds and snow to the Northeast during the weekend.

The slightly more substantial gains in the summer strip are likely tied to the storage situation. The U.S. Energy Information Administration reported a 78 Bcf withdrawal from storage for the week ending Feb. 23. With stocks now at 1,682 Bcf, inventories have fallen 680 Bcf below year-ago levels, even as the deficit to the five-year average shrunk to 372 Bcf.

“The market initially sold off on this number, but sprang quickly back up as perhaps participants digested the year-on-year implications of this number,” Mobius Risk Group analysts said.

The 680 Bcf y/y storage deficit is likely the main rallying cry for bulls right now, especially considering the U.S. burns more natural gas for baseload electricity generation today than in years past, according to NGI’s Patrick Rau, director of Strategy and Research.

“Any end-of-winter cold blasts will likely add to that deficit. Last winter was pretty mild in comparison, after all,” Rau said.

Indeed, even as production continues to reach new heights — cresting 79 Bcf/d earlier in the week — weather forecasters were calling for more cold blasts during the month of March that could lead to larger-than-normal storage withdrawals. The first of those systems was expected to hit the highly populated United States Northeast beginning Friday, with data and analytics company Genscape Inc. showing Appalachia nominated demand up 1.7 Bcf/d day over day.

The temperatures forecast with the system were expected to continue lifting demand to a peak of 14 Bcf/d by Monday. New England demand was up nearly 0.8 Bcf/d to just above 3.4 Bcf/d and is forecast to hold above 3 Bc/d on Monday.

There are risks to the downside when it comes to the demand forecast, however, as demand destruction could come into play, the Louisville, KY-based company said. The storm will feature fierce winds that should generate increases in wind power and may be destructive of trees and power lines. The system also is expected to include heavy snows, which can inhibit travel, bringing commercial-sector demand numbers down as people stay home.

“That may also be exacerbated by this system starting on a Friday and hitting hardest during a weekend. Also, while snows may be heavy, actual temperatures associated with the system are not terribly extreme on the cold side,” Genscape said.

Additional weather systems are expected to quickly follow, according to NatGasWeather. The overnight weather data on Thursday maintained colder trends March 11-16 by being slower in the way a strengthening ridge over the central and eastern U.S. advances eastward.

“With the ridge stalling in expanding into the East, it provides opportunity for below normal temperatures to linger over the East Coast a couple days longer and through March 13-14,” NatGasWeather said.

Friday’s trading action didn’t reveal much of what market players were thinking. The prompt-month traded in a tight range of less than a nickel and was up less than 1 cent at midday. The April contract settled Friday at $2.695, down three-tenths of a penny on the day.

NatGasWeather’s team said it thought Friday’s trade “could be telling as to whether prices find support for another leg higher, or would finally give in to strong production and weather patterns being seen as not quite cold enough. However, with the EIA storage report missing bullish, and then temperatures trending colder Thursday, prices seemed to find additional support.”

Still, the forecaster isn’t convinced the weather pattern was cold enough to impress, “but the markets have been reacting like it just might be. Either that, or bears are setting a trap for bulls,” it said.

Technical indicators show that April has been gripped within an upward sloping channel since mid-February, which puts resistance around $2.75 and the top of the 20-Day Bollinger Band at $2.77, according to Rau.

“Will we get there? Possibly, but slow stochastics are above 70, and are getting close to overbought territory,” Rau said. Support sits at $2.65, so the channel is affording 5-6 cents to the upside and downside at the moment, he added.

Regardless, Mobius analysts expect the storage deficit issue to continue garnering attention as the market turns its attention away from any lingering winter weather demands and heads into spring.

While not a clear concern for the market now, Rau questioned whether the possibility of four potential interest rate hikes by the Federal Reserve Board (Fed) this year could impede production as exploration and production companies target spending within cash flow. In comments Tuesday to the House Financial Services Committee, new Fed Chairman Jerome H. Powell suggested that the central bank could hike its key interest rate faster than anticipated.

“Higher interest payments will lower their cash flows, everything being equal, so does that curtail production at all? Maybe not by a whole lot, but it’s certainly one less thing to entice a major increase in gas output,” Rau said.

Looking more closely at forward markets across the country, New England pricing points fell substantially despite the winter weather systems on tap for the region in the coming weeks.

Meanwhile, other Northeast and Appalachian points increased in line with Nymex futures. Dominion South April forwards jumped 7 cents from Feb. 23 to March 1 to reach $2.143, while May climbed 6 cents to $2.086 and the balance of summer (May-October) tacked on a nickel to reach $2.04. The winter 2018-2019 strip was up just 2 cents to $2.46, Forward Look data shows.

Meanwhile, Genscape said the launch of the first vessels from Cove Point are coming at a good time as European market demand has spiked and is expected to remain high as an intense cold front has extended out of Siberia over the continent. Parts of the United Kingdom (UK) are reportedly breaking snowfall records set 30 years ago, and daytime highs in Great Britain and Scotland have failed to break out of the teens. The system is hitting a broad swath of the continent, with snow reportedly showing up on Mediterranean beaches.

“The UK’s primary gas provider, National Grid, has issued warnings of strained operating conditions and potential shortages as system demand on Wednesday set a 10-year high, and storage inventories have plummeted,” Genscape said. “Demand has been met with heavy storage withdraws, but this has also pushed LNG storage inventories to year-to-date lows.”

The rise in U.S. exports from the East Coast should be a boon for Appalachia producers and drive new gas pipeline flows in the Mid-Atlantic, PointLogic said. Indeed, Tetco-M3 April forward prices jumped 7 cents from Feb. 23-March 1 to reach $2.247, while May and the balance of summer (May-October) rose 5 cents each to $2.167 and $2.16, respectively. The winter 2018-2019 was up 6 cents to $3.82, according to Forward Look.