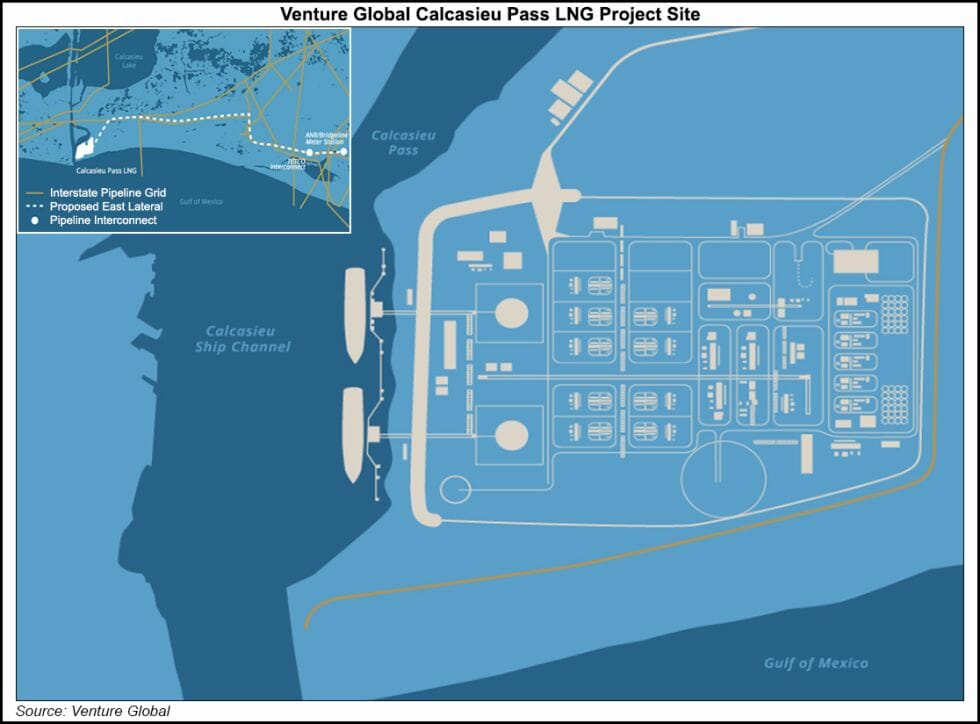 “This is significant, as I anticipate we’ll be able to use the framework developed in this order to evaluate the other LNG certificates that the Commission is considering,” said Federal Energy Regulatory Commission Chairman Neil Chatterjee.

The Calcasieu Pass Project, to be built on a 930-acre site in Cameron Parish, LA, would have an export capacity of 10 million metric tons/year and include two 200,000 cubic meter LNG storage tanks; two LNG berthing docks, designed to handle carriers of 120,000-210,000 cubic meter cargo capacity; and a 1,500-foot by 3,000-foot turning basin adjacent to the Calcasieu River Ship Channel. All would be built and operated by Venture Global Calcasieu Pass LLC (VGCP), a subsidiary of Venture Global LNG [CP15-551].

The project also calls for constructing 23.4 miles of 42-inch diameter pipeline to bring feed gas to the terminal site. The pipeline would have interconnections with ANR Pipeline Co., Texas Eastern Transmission LP and Bridgeline Holdings LP. Associated infrastructure would be built and operated by TransCameron.

“With our FERC order in hand and our project contracted with binding 20-year sale and purchase agreements with Shell, BP, Edison SpA, Galp, Repsol and PGNiG, we plan to immediately commence construction activities in Louisiana in close coordination with FERC and other agencies,” said Venture co-CEOs Bob Pender and Mike Sabel.

VGCP and TransCameron filed a joint application for FERC authorization of Calcasieu Pass in September 2015. The project received a final environmental impact statement (FEIS) in October and is tentatively scheduled to begin operations in 2022.

The breakthrough when considering the Calcasieu Pass project consisted of “a new approach for consideration of direct greenhouse gas emissions from LNG facilities,” FERC said. A multi-pronged approach to improve its process in recent months has put it in a position to move forward more efficiently with a dozen other pending LNG projects, according to Chatterjee.

FERC signed a memorandum of understanding (MOU) “with the Department of Transportation’s Pipeline and Hazardous Materials Safety Administration, cut through unnecessary red tape and reduced inter-agency friction by signing the One Federal Decision MOU with our federal partners, and increased the number of engineers working on our reviews by casting a wider net to capture talent everywhere we could find it,” Chatterjee said.

“This is a matter of truly strategic significance, and we as an agency are dedicated to doing our part in this historic American moment by conducting thorough, efficient and legally durable reviews of every LNG terminal application we receive.”

The U.S. Department of Energy applauded FERC’s new approach, saying it would streamline and improve the LNG terminal application process.

“With the United States now being the world’s largest producer of oil and natural gas, it is critical we build the necessary infrastructure to get these natural resources to market,” said Deputy Energy Secretary Dan Brouillette. “This move by FERC is a significant step to bring more U.S. LNG into the market, as well as streamline the energy infrastructure permitting and authorizations process.”

Approval of the Calcasieu Pass project came less than two months after it was conspicuously removed from the agenda of FERC’s monthly meeting in December. Speculation at the time was that the two-Republican, two-Democrat Commission was unable to come to agreement on the project. But on Thursday it was approved by a 3-1 vote, with Republicans Chatterjee and Bernard McNamee, joined by Democrat Cheryl LaFleur, voting for authorization.

In a separate statement included with the order, LaFleur disagreed with FERC’s decision not to disclose or discuss certain GHG emissions associated with the project, but she concluded that Calcasieu Pass “is not inconsistent with the public interest.”

The second Democrat on the Commission, Richard Glick, cast the one dissenting vote, arguing that the order failed to meet the requirements of both the Natural Gas Act and the National Environmental Policy Act.

FERC, Glick said, “is again deliberately ignoring the consequences that its actions have for climate change.” In authorizing the Calcasieu Pass project, FERC “again refuses to even consider the climate change implications of the project’s direct GHG emissions…”