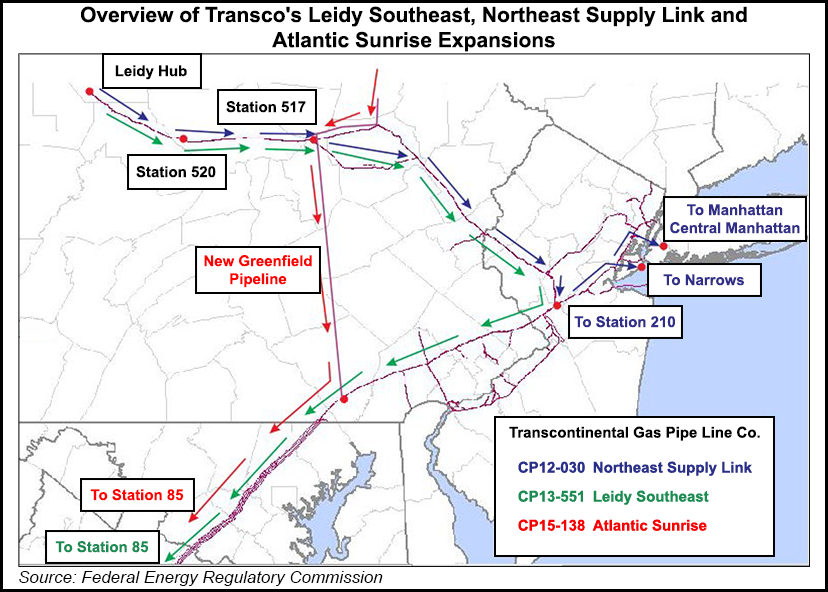 Transco’s 130 MMcf/d Leidy expansion entered service last year to transport gas from Pennsylvania to Mercer County, NJ (see Daily GPI, Dec. 30, 2015). New Jersey regulators argued that the lawsuit was moot because construction has been completed, but the NJCF countered by saying the court could provide relief from analyzing the environmental impacts and providing measures to address them.

The three-judge panel found that New Jersey determined the pipeline project would not cause harm to endangered species in the state and actually set conditions to better protect some. The DRN claimed the PADEP failed to review an environmental assessment (EA) by Transco before it issued a water quality permit. As a result, the organization argued that FERC prematurely authorized tree clearing activities in violation of state water quality standards.

Transco submitted an application to FERC in 2013 for a certificate of public convenience and necessity for the Leidy project. FERC completed its EA in 2014 and issued the certificate later that year.

Construction was put on hold early last year after the DRN filed with another appeals court for a review of FERC’s approval (see Daily GPI, March 13, 2015). The NJCF had previously filed for an emergency motion for a stay of construction, which the third circuit denied. Construction on the project eventually started in May 2015 to move more Marcellus Shale gas to local distribution companies along the Atlantic Seaboard.