A petition challenging FERC’s order granting a certificate to build a natural gas pipeline that would connect New York and New Jersey was rejected Tuesday by the U.S. Court of Appeals for the District of Columbia Circuit. 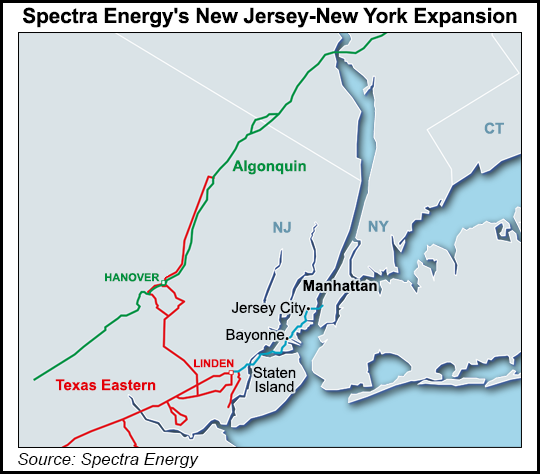 The Federal Energy Regulatory Commission (FERC) in May 2012 issued a certificate of public convenience and necessity for the proposed pipeline to be built by Spectra Energy Corp.’s Texas Eastern Transmission LP and Algonquin Gas Transmission LLC (see Daily GPI, May 23, 2012).

The pipeline is to serve increasing gas demand in the New York City metropolitan area.

FERC issued a draft environmental impact statement (EIS) in Sept. 2011 and a final EIS in March 2012. In the course of the environmental review, FERC received hundreds of comments, including comments concerning the level of radon present in natural gas and radon’s effect on indoor air quality. The Commission responded to the concerns, ultimately concluding that radon from home use of gas was not likely to pose a hazard and citing factors that in FERC’s view would reduce radon in gas.

After the certificate was issued, the City of Jersey City, NJ, Sierra Club, Food & Water Watch and NO Gas Pipeline, among others, challenged the certificate, claiming in various petitions that FERC had not met National Environmental Policy Act requirements [NO Gas Pipeline, et al v. FERC, No. 12-1470]. Statoil Natural Gas LLC and other operators were intervenors for the defense.

In their separate petition, Jersey City authorities argued that FERC could not constitutionally conduct the proceedings and grant the order because its financial structure created “possible temptation” to be biased in favor of pipeline companies, and also that FERC exercised actual bias in its approval.

“None of the petitions brings the order for review within the jurisdiction of this court,” wrote Judge David Sentelle for the majority opinion. “The environmental petitioners lack standing, and the petition of Jersey City raises questions not preserved in the administrative proceedings.” The court dismissed “all of the petitions without reaching the merits of any.”