The U.S. Court of Appeals for the District of Columbia Circuit on Monday removed a stay of the Obama administration’s methane emission reduction rules that had been issued by Environmental Protection Agency (EPA) Administrator Scott Pruitt. 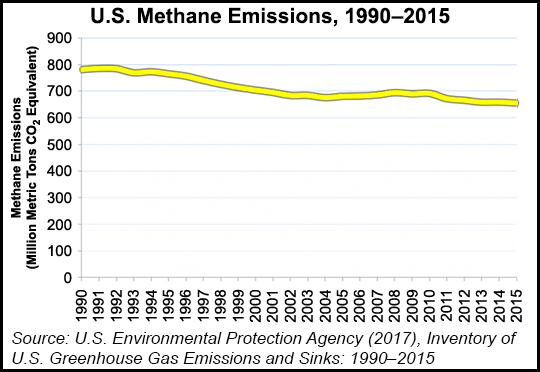 Led by the Environmental Defense Fund (EDF) and more than a dozen states, cities and the District of Columbia, a court challenge was lodged last month to turn back Pruitt’s move, part of the Trump administration’s comprehensive rollback of alleged onerous regulations by the previous administration that they contend have hurt the U.S. economy.

In late May, the EPA ordered a 90-day stay over parts of proposed rules governing new sources of methane emissions from the oil and natural gas industry while the agency works through a reconsideration process. Two weeks later, Pruitt indicated that EPA was considering extending the stay by two years, while separately Trump’s Bureau of Land Management (BLM) postponed implementing an Obama-era rule governing flaring/venting of associated natural gas on public and tribal lands.

At issue are the fugitive emissions, pneumatic pump and professional engineer certification requirements outlined in updates to the agency’s 2016 New Source Performance Standards (NSPS), which the agency first unveiled during the Obama administration. The NSPS was designed to reduce methane, volatile organic compounds and toxic air pollutants.

Monday’s action by the appeals court only applies to the 90-day stay from EPA. In a 2-1 opinion, the court found that Pruitt’s action exceeded his authority. The majority opinion by judges David Tatel and Robert Wilkins emphasized that “nothing in this opinion in any way limits EPA’s authority to reconsider the final rule and to proceed with its June 16 NPRM [Notice of Proposed Rulemaking],” adding that EPA has no legal requirement to reconsider the Obama methane rule.

In a dissenting opinion, Judge Janice Rogers Brown, an appointee of former President George W. Bush, wrote that the court did not have jurisdiction over the matter because it didn’t involve a “final action” by the EPA, which she said was instead merely “hitting the pause button.”

Given the swift legal challenges to the initial EPA stay of the methane emission reduction requirements, the EPA in June published an NPRM suggesting a two-year pause was being considered “to look more broadly” at the entire EPA methane rule during what Pruitt has characterized as a “reconsideration phase.”

Setting aside the prospects of an EPA-imposed two year hiatus for the rule, EDF President Fred Krupp hailed the ruling as “a big win for common sense, public health, climate security and the rule of law.”

American Petroleum Institute spokesman Reid Porter told NGI’s Shale Daily that the organization supports revising the NSPS, adding, “We are hopeful that the eventual outcome recognizes the science, allowing for revisions to the flawed rule.”

“A stay is needed to allow for regulatory certainty as EPA continues the formal process to review the rulemaking,” Porter said Wednesday. “The previous 2012 standards, developed in collaboration with industry, and driven by industry’s innovation and incentive to capture more of what we sell, are already effectively reducing emissions.”

A spokeswoman for the Interstate Natural Gas Association of America said the organization was also disappointed by the ruling.

Colorado last Friday joined more than a dozen other states and the District of Columbia in seeking implementation of the EPA methane reduction rules. Gov. John Hickenlooper said his state asked the appellate court to join plaintiffs and other intervenors, saying Colorado wants to help assure “comprehensive federal regulation of methane emissions” as authorized by EPA under President Obama.