A federal appeals court has denied a request to review a decision by FERC to allow construction of a compressor station in the Town of Minisink, NY, endorsing the Commission’s decision for a 225 Dth/d delivery expansion of Millennium, Pipeline to the Northeast and New England markets. 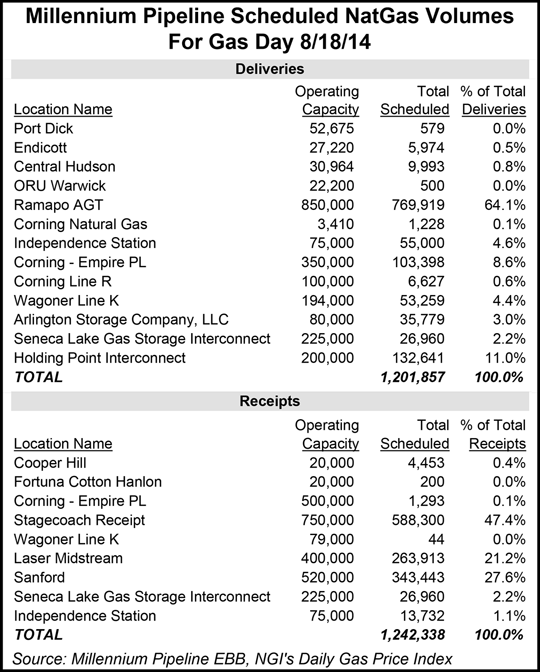 “Given the choice, almost no one would want natural gas infrastructure built on their block,” said Judge Robert Wilkins. “The sentiment is understandable. But given our nation’s increasing demand for natural gas…it is an inescapable fact that such facilities must be built somewhere.”

In a 33-page decision issued Friday, a three-judge panel of the U.S. Court of Appeals for the District of Columbia Circuit ruled that the Federal Energy Regulatory Commission (FERC) took action consistent with the agency’s regulations when it approved Millennium Pipeline Co. LLC’s proposal for the compressor station in 2012. The agency’s decisions “were reasonable and reasonably explained,” the court said.

Millennium’s proposal called for building the compressor station at Minisink to boost the pipeline’s deliveries of Marcellus Shale gas by an additional 225,000 Dth/d — to approximately 675,000 Dth/d total — to its interconnection with Algonquin Gas Transmission LLC at Ramapo, NY, to serve the Northeast and New England markets.

FERC voted 3-2 to issue a certificate of public convenience and necessity to Millennium for the project in July 2012 [CP11-515]. The agency rejected a request for a rehearing and a stay of its decision by a group known as the Minisink Residents for Environmental Preservation and Safety (MREPS) in December 2012 (see Daily GPI, Dec. 11, 2012; Sept. 27, 2012).

According to court records, opponents of the Minisink compressor station floated a plan known as the “Wagoner Alternative” to FERC, which called for Millennium to build a smaller, 5,100-horsepower (hp) compressor station next to its existing Wagoner Meter Station, at a site along the pipeline about seven miles northwest of Minisink. But the alternative would have required replacement of a 7-mile segment of pipeline that crosses the Neversink River.

In response to the alternative, FERC sent notice to landowners within the vicinity of the Wagoner Meter Station and the so-called “Neversink Segment” and incorporated their feedback into the review of Millennium’s proposal. An environmental assessment completed by FERC several months later found “some positive environmental upshots” with the Wagoner Alternative, but ruled that, on balance, the Minisink project was environmentally preferable.

Millennium completed construction of the Minisink project and placed the compressor station into service in June 2013.

“Though we respect the concerns [the petitioners] raise, we conclude that, as a legal matter, the commission’s decisions were both reasonable and reasonably explained. Consequently, we deny the petitions for review,” wrote Wilkins and Judges Brett Kavanaugh and Patricia Millett. “In approving the Minisink Project, the commission accorded the Wagoner Alternative the serious consideration it was due, in keeping with its statutory obligations under the NGA [Natural Gas Act] and NEPA [National Environmental Policy Act]. In its judgment, the commission did not think the Wagoner Alternative preferable and concluded that the Minisink Project, as put forward by Millennium, would serve the public interest and necessity.

“We are simply not empowered to second-guess the commission’s determination on this point or to substitute our judgment for the commission’s. Our much more limited role is, instead, to confirm that FERC thoroughly and reasonably examined the issue, and on the record before us, we are assured that it did.”

The case is Minisink Residents for Environmental Preservation and Safety et al v. FERC (No. 12-1481).