EQT Corp. on Monday announced another cut in 2020 capital expenditures (capex) and said it is releasing 15% of current firm transportation (FT) obligations as the Appalachian pure-play continues to optimize its cost structure. 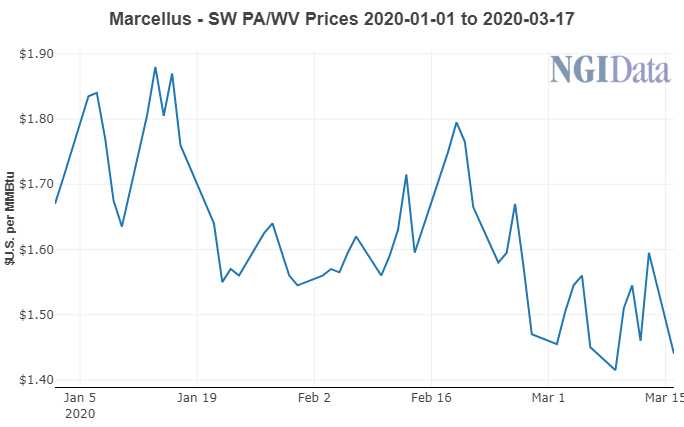 The company entered an agreement with an undisclosed third party to release 400 MMcf/d of FT and entered into other deals to continue moving its gas. The move follows EQT’s successful efforts to renegotiate a natural gas gathering agreement with an affiliate of Equitrans Midstream Corp.

The company said it expects transmission expenses to decrease by 4 cents/Mcfe this year, a gain likely to be offset by weaker average differentials as commodity prices suffer.

Exploration and production companies across the country, particularly those with more exposure to oil, have announced spending cuts over the last week as a price war between the Organization of the Petroleum Exporting Countries (OPEC) and Russia continues to weigh on commodity markets and demand is expected to take a beating due to the coronavirus.

Nearly all of EQT’s production base is natural gas, meaning it could get a lift if associated output falls in oilier basins. But the company is also guiding for up to 12.8 million bbl of natural gas liquids this year, which could fall along with oil.

“While we believe the recent OPEC actions impacting the global oil markets will drive fundamental improvements to the U.S. natural gas sector, EQT will continue to execute strategic initiatives which position us to successfully navigate a volatile commodity environment,” said CEO Toby Rice.

The company also said it would scale back in Ohio and cut capex by another $75 million this year with full-year spending of up to $1.175 billion. But, “through schedule and well design optimization,” the spending cut isn’t expected to impact 2020 production guidance of 1.45-1.50 Bcfe.

The management team that took over last July after a proxy battle is aiming to aggressively cut debt and realign operations to boost performance and value. EQT has cut 2020 spending by $200 million since its initial budget was released in October. The nation’s largest gas producer also said late last year it would sell up to $1.5 billion in assets to help achieve its financial goals, including properties in the Utica.

Another Appalachian pure-play also announced a deal late Monday to cut midstream expenses. Montage Resources Corp. said it has consolidated all of its gas gathering contracts with an unspecified midstream partner into one agreement.

Montage said the move “ensures a dedicated gatherer” for its Marcellus Shale development in Ohio as it targets more liquids. Among other things, the new agreement reduces near-term volume obligations and fees. Assuming the company continues its one-rig program, the contract is expected to deliver $200 million of savings.