Appalachian pure-play CNX Resources Corp. indicated Thursday that a merger with any of its peers is likely out of the question when measured against current performance and the value it’s likely to create in the coming years. 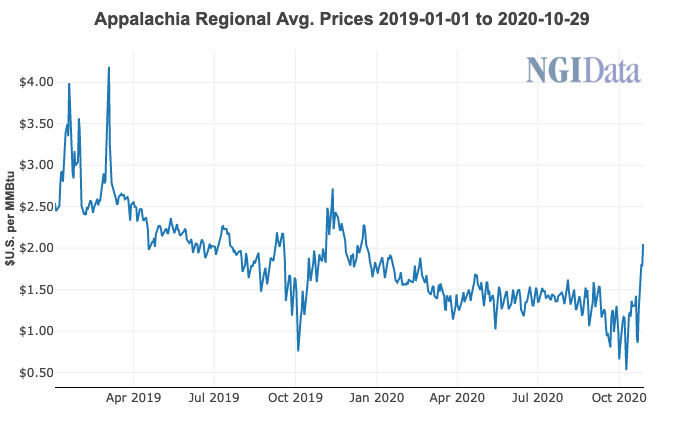 “You’re going to need to find someone who is not going to weaken or dilute our best in class attributes,” said CEO Nicholas Deluliis. He pointed to the story the company has been telling for years and a third-party report by Enverus that found CNX has a peer-leading asset inventory under $2.50/Mcf natural gas and low operating costs.

Deluliis took a bit more time than usual during the third quarter earnings call to address the possibility of mergers and acquisitions (M&A). The comments came only days after Bloomberg reported that EQT Corp., another Pittsburgh mainstay, offered to buy CNX. EQT on Tuesday said it was acquiring Chevron Corp.’s large Appalachian portfolio.

CNX is focused on a seven-year plan expected to generate FCF of $3.4 billion by 2026, the CEO noted. The strategy has positioned the company to weather what’s likely to be a rough stretch in the weeks ahead given the U.S. presidential election, an ongoing spike in global Covid-19 cases and the typical seasonal volatility that comes as winter approaches.

“Clearly, and we all know this, the world is faced with challenges and uncertainty and we think there’s a significant risk that those are going to escalate over the next 90 days,” Deluliis said.

Year to date, CNX has generated $271 million of FCF, with plans to generate a total of $350 million by year’s end. The company plans to use funds through the remainder of the year to pay down debt. “It’s the prudent thing to do in the near-term given the uncertainty that we face,” Deluliis said. “And as we enter 2021 and beyond, our main priority is still going to be to delever,” the CEO added. Ultimately, CNX is aiming to pay $1 billion of debt by 2023.

Earlier this year, CNX curtailed some production and has been slow to bring volumes back online in anticipation of higher prices. The Henry Hub prompt futures contract broke above $3.00/MMBtu last week for the first time in nearly two years.

“We’re moving towards having all of our production online now. We’re in the process of opening up the last pad that we had shut-in, and we should be up to full rate in a couple days,” said COO Chad Griffith. “So, we’re going into the winter season with our production going strong.” But management cautioned that it will stay flexible with regard to shut-ins and completion activity as the market warrants.

“Depending on how the winter and the 2021 gas price strip shapes up, we could move some completion activity up into 2021,” said CFO Donald Rush. “However, we do not plan on adding incremental activity to our seven-year plan, just optimizing the shape of our production profile to match short-term pricing events.”

Meanwhile, Appalachian rival Antero Resources Corp. also said Thursday it’s focused on cutting costs and debt. The company said it released 300 MMcf/d of firm long-haul transportation commitments set to take effect next year and cut costs by $25 million. Another 810 MMcf/d of firm transportation is also set to expire by the end of 2024, which is forecast to reduce annual marketing expense by $100 million.

CFO Glen Warren also reported progress on debt cutting initiatives implemented last year, noting the company has sold assets and repurchased debt for a combination of $751 million. During the second half of the year, the company could generate up to $200 million in FCF based on current strip pricing.

Antero’s average realized natural gas price before hedging during the third quarter was $1.93/Mcf, down 23% from the prior year. Despite a widening in the regional basis differential, the company realized only a 5 cent discount to average Henry Hub prices during the period because of firm transportation portfolio, which also helped operations.

The company also said it earned $22.01/bbl before hedging natural gas liquids, a 47% increase sequentially and only a 2% decline from the prior year. Antero shipped 49% of its liquids on the Mariner East 2 pipeline system in Pennsylvania for export, helping it to realize a 6 cent/gallon premium to Mont Belvieu pricing. The rest of its liquids volumes were sold in the Appalachian Basin.