Appalachia’s natural gas-heavy exploration and production (E&P) companies continue to face headwinds, with downward pressure on strip pricing expected to lead to even deeper spending cuts as they try to operate within cash flow and deliver on this year’s plans. 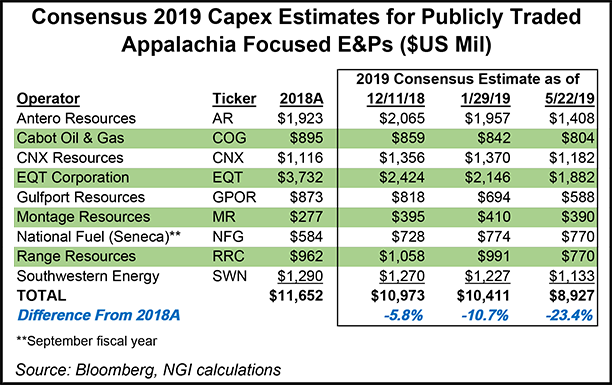 While the first quarter saw a typical lift in average realized prices for many of the basin’s leading operators during the winter months, management teams see them again falling as usual with warmer weather. However, other factors are wedging their way into the picture. Abundant supplies and waning demand are likely to prompt some changes through 2020.

“Despite annual supply growth of 8 Bcf/d over the past two years, natural gas pricing has avoided a major pricing collapse thanks to equally impressive growth on the demand side of the ledger,” said analysts at Tudor, Pickering, Holt & Co. (TPH) in a note to clients earlier this month. “The problem is, 50% of demand growth has been driven by exports, which are positioned to drop off materially while supply growth, driven by associated volumes, continues chugging.”

Appalachian producers had announced plans to slash spending heading into this year given the gas outlook, an aggressive pipeline buildout that’s winding down and more pressure from investors demanding better returns. Those factors remain unchanged.

“Exploration and production companies in Appalachia have come under sustained shareholder pressure to improve capital discipline amid lower natural gas prices that cap margins and returns,” said analyst Elena Nadtotchi of Moody’s Investors Service. “In response, most natural gas producers in the region are cutting growth investment to manage their businesses within operating cash flow.”

During the first quarter, however, some Appalachian producers failed to hit the brakes on spending. Some of the additional activity was expected on front-end loaded budgets as operators including CNX Resources Corp. and Gulfport Energy Corp. built their well inventory or got back to work after a slow finish to 2018. In fact, the region’s rig count has increased by about five since the beginning of the year and it’s currently holding steady at about 80.

Things are poised to change.

Driven by the Permian Basin, Lower 48 operators are on course to increase oil production significantly in 2019. According to Rystad Energy, volumes could come in around 1.2 million b/d, or a growth rate of about 16% between the first and fourth quarters. With additional oil production, associated gas volumes are set to rise as well.

TPH is forecasting associated gas growth of 3.2 Bcf/d, as “associated volumes will be more than sufficient to satiate” incremental demand growth. As a result, we believe 3 Bcf/d will need to drop out of our base case production forecast, with gas directed basins moving to maintenance capital and pricing remaining in the $2.50 range to draw in incremental coal to gas switching.”

Some Appalachian operators have indicated a shift toward maintenance spending, while others are focusing more intently on natural gas liquids (NGL), as more takeaway is available in the region after partial service started on Mariner East 2 late last year.

Gulfport, for example, plans to shift more capital from Ohio to wetter acreage in the South Central Oklahoma Oil Province as it moves toward more of a maintenance program in the Northeast. Antero, one of the nation’s largest liquids producer, is confident its assets in West Virginia’s Marcellus Shale will see it through.

“I think we feel really good about the NGL markets, and think that’s going to continue to strengthen, and so that makes up for softness in gas in the near term,” Antero CFO Glen Warren said during the first quarter earnings call earlier this month. Antero reported a 44% increase in year/year liquids volumes in 1Q2019.

NGI’s Patrick Rau, director of strategy and research, estimated that Appalachia’s E&Ps set their budgets this year based on a median expected New York Mercantile Exchange (Nymex) price of $2.85/MMBtu. If the rest of the current year strip holds, however, the final 2019 Nymex strip would be $2.76. The next 12-month strip, he added, is even lower at just $2.68.

While lower prices mean lower free cash flow, operators continued to demonstrate in the first three months of the year that they can compete with other basins well. Moody’s analysts noted the region’s good rock quality, highly productive wells and low breakeven prices, along with the hedge protection and firm transportation commitments that are likely to keep Appalachian production growing by single-digits this year.

As Rau noted, another major contributor to performance that was on display during the first quarter was impressive efficiency gains on increasingly long laterals, improved completion designs and lower cycle times. “It also doesn’t hurt that oilfield service cost inflation is under control,” he said. “This means producers can either increase their production for the same capital expenditures, which I don’t think they want to do in this environment, or they can achieve their stated 2019 production guidance for less.”

EQT Corp, for example, lifted its annual production guidance by 10 Bcfe and dropped three rigs during the first quarter on strong Marcellus results, all while its spending plans remain unchanged. Expect more of that from other operators, Rau said.

Wall Street appears to be thinking along the same lines. Consensus for 2019 capital expenditures (capex) for the region’s leading operators was projected to decline by 6% in mid-December. That grew to a projected 11% year/year decline by late January. As of May, Wall Street analysts are now forecasting 2019 capex to drop by 25% among Appalachia’s leading producers.

To be sure, the region is still a juggernaut, churning out about 32 Bcf/d. Pipeline capacity has grown to meet those volumes and currently stands at roughly 23 Bcfe/d, with another 6 Bcf/d of takeaway under construction, Moody’s analysts said earlier this month. Since 2017, basis differentials have narrowed as a result and given operators in the region a lift.

Things could also reverse dramatically in the coming years, with another growth spurt anticipated as a second wave of liquified natural gas projects comes online. For now, however, the robust production growth that has characterized the basin over the last decade is tempering as operators manage through an oversupplied market.

“The way we see it, producers can move toward maintenance next year and minimize pricing pain, or wait and allow the invisible hand to strike with much greater force,” TPH analysts said.