As oil’s six-month slide persists and natural gas prices stagnate with warmer temperatures, the season hasn’t treated the upstream sector kindly, with news of spending cuts, potential job losses and some fields feeling the squeeze more than others. 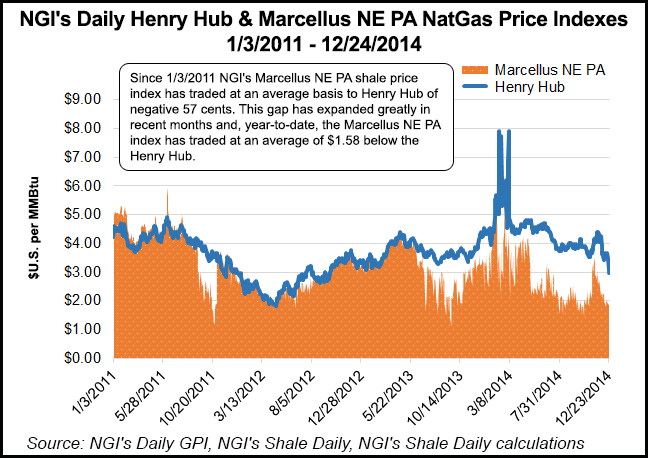 But one company in the Appalachian Basin turned the coin over this month, demonstrating how cyclical the business can be, providing a reminder that each onshore play is unique in its needs and that exploration and production (E&P) companies, at least for now, are pushing to sustain production levels.

Deep Well Services, based in Zelienople, PA, about 30 miles north of Pittsburgh, announced that it will spend heavily next year to add equipment and personnel, and to meet growing demand as operators in Ohio, West Virginia and Pennsylvania need more to serve wells that are getting deeper and longer in the Marcellus and Utica Shale plays.

“Usually, things in November, December, are slow,” said Deep Well CEO Mark Marmo in an interview with NGI’s Shale Daily. “We’ve had two record months. Our customers for next year are telling us that they’re going to be busy. We actually have a couple contracts — take-or-pay contracts — so we know that four of our eleven rigs will be busy for the whole year.

“We do a lot of market intel and this is a gas play that we’re in,” he added. “Our customers are going to be busy. We feel the need to add on and grow.”

Several public and private E&Ps have signaled big cutbacks for their 2015 capital spending plans, with hundreds of rigs expected to be idled (see Shale Daily, Dec. 12). As oil has tumbled, the Permian Basin in West Texas and the Bakken Shale in North Dakota were some of the earliest plays projected to take a hit. In the Appalachian Basin, meanwhile, where natural gas is king, the story has been slightly different.

Thus far, almost all the companies that have provided 2015 guidance are also signaling big cutbacks, but at the same time, they’ve announced plans for considerable production growth, as others have across the country (see related story). In the Northeast, EQT Corp. has been the only exception so far, saying spending would increase slightly to aid production growth (see Shale Daily, Dec. 8) .

While natural gas liquids are partially linked to oil prices, with butane and propane, for example, recently tumbling in value along with oil, natural gas stands alone. Moreover, Northeast natural gas prices have consistently trended below the Henry Hub benchmark price. While some parts of the basin and some operators will likely be hit harder than others, according to financial analysts, many are used to wider differentials and are more willing to absorb the spread, as low finding and development costs — primarily in the Marcellus Shale — make it a bit easier.

“The Utica-Point Pleasant is not immune, and the Marcellus is holding out OK,” wrote Wunderlich Securities analyst Irene Haas in a recent note to investors, summing up the commodity price environment’s effects on producers in the region.

Deep Well Services is expanding its fleet next year. It will add two standalone snubbing units and an additional service rig, while it also plans to hire 65 new employees to help operate the equipment. A snubbing unit helps force pipe downhole under high-pressure and they contain blowout preventers, as well. The units Deep Well is adding are heavy-duty and designed to handle the increasing pressures operators have reported in the basin, especially as a monster dry gas window has emerged in southeast Ohio, West Virginia and Pennsylvania (see Shale Daily, March 26).

“These Utica wells, and even the wells being drilled in the Marcellus, are now much longer. The horizontals average anywhere from 3,500 feet to in excess of 10,000 feet,” Marmo said. “The longer these laterals go, some of our competitors can’t go very far out on these laterals. We force pipe down holes and we can go 10,000, we can go 20,000 feet; we can go as far as anybody wants. It’s really these high pressure wells that are starting to come online and the length that has really driven what we see as a technology opportunity to take advantage and be ahead of the curve.

Much of the available equipment in Pennsylvania, for example, is rated for 5,000 psi. The latest series of Utica wells, both inside and outside Ohio, are a primary reason Deep Well Services will dole out between $1.7 and $2 million for each new snubbing unit, Marmo said.

“These are live wells, we work over live wells — it’s a safety factor,” Marmo said. “It allows you to work on a live well.”