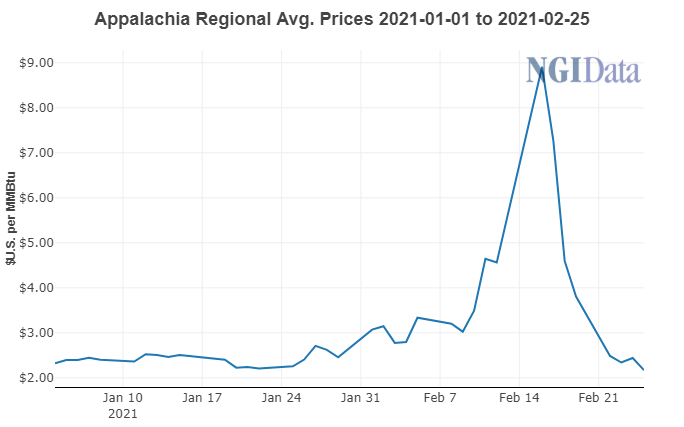 “While a warmer start to the winter heating season and higher storage levels resulted in wider than anticipated differentials across the Appalachian Basin during the fourth quarter, we remain optimistic that the improving outlook for lower end-of-season inventories will provide tailwinds for regional natural gas prices during 2021,” said Cabot CEO Dan Dinges on Thursday after the fourth quarter results were issued.

The company said fourth quarter production was 2.38 Bcfe/d, down from 2.45 Bcfe/d in the year-ago period.

Cabot, like other Appalachian operators, has been scaling back its operations in recent years as commodity prices have fallen and investors demand more from the upstream sector. The company expects 1Q2021 production to average 2.25-2.30 Bcfe/d. The decline from 4Q2020 volumes is expected to be driven by a decrease in operating activity levels and capital spending during the second half of 2020.

Dinges said U.S. dry gas production is still well below prior year levels, and the company doesn’t expect a “significant rebound in volumes throughout the year as producers across the industry are focused on free cash flow generation, balance sheet repair and capital returns to shareholders over production growth.”

Range also intends to stay in maintenance mode this year, announcing a $425 million all-in capital budget for 2021 that will keep year/year production flat at 2.15 Bcfe/d. Last year’s budget came in at $411 million, or $109 million less than originally planned.

Range expects to turn 59 Marcellus wells to sales this year mainly on its liquids-rich acreage. The company also continues to focus on cutting debt to implement a cash return program for its shareholders.

The company produced 2.1 Bcfe/d in the fourth quarter, down from 2.3 Bcfe/d in the year-ago period. The company curtailed production during 4Q2021 because of low prices and infrastructure maintenance.