Following last year’s rush to test the boundaries of the Utica Shale outside Ohio, some producers are reevaluating their prospects in the Appalachian Basin to determine how best to spend capital after consistent success from the formation in West Virginia and Southwest Pennsylvania. 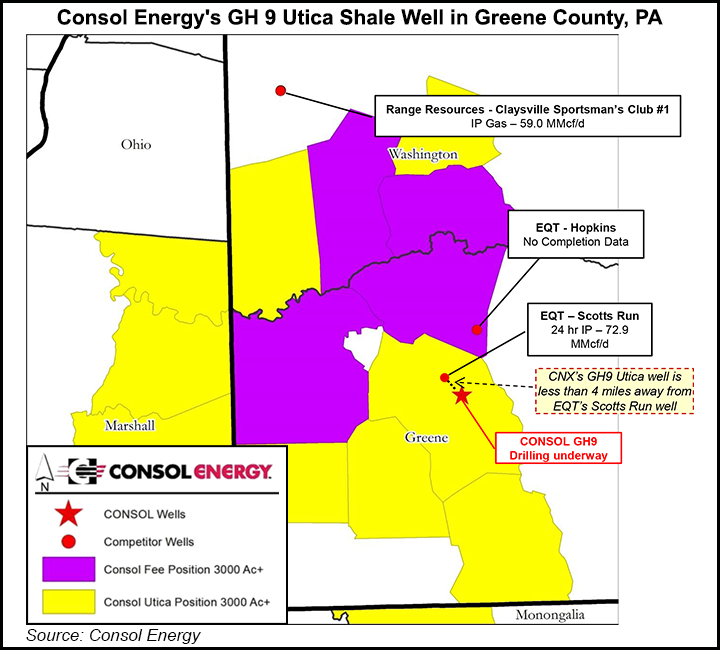 To be sure, for those with established acreage across the basin, the Marcellus Shale remains the low-risk, high-quality asset, while the Utica Shale in Southeast Ohio remains the proven economical sweetspot. But better-than-expected results from the Utica Shale in West Virginia and a series of record-breaking Utica wells in Southwest Pennsylvania now have management at some companies wondering how those blocks could fit into stretched drilling programs amid the current commodity price environment. Infrastructure would need to be built, or repurposed for voluminous dry gas Utica wells, astronomical costs, particularly in the deep, dry gas Utica of Southwest Pennsylvania, would need to come down and more data needs collecting.

For the time being, as oil prices seesaw and natural gas prices show no signs of a rebound, some of the basin’s leading producers are at the very least considering their options.

“I think at this point, it’s just too early to know how we’re going to allocate those rigs to potential Utica wells in 2016 or not,” Range Resources Corp. CEO Jeffrey Ventura told financial analysts during the company’s second quarter earnings call in July. “I think we’ll look at the economics; we’ll look at the cost; we’ll look at the markets and our new transportation deals and the customers that are coming online. We’ll have to look at all of those things to see how that rolls out when we present our budget to the board in December.”

Range was the first company to test the Utica in Southwest Pennsylvania’s Washington County. In December, the company reported an initial production (IP) rate from its Claysville Sportsman’s Club #1 well of 59 MMcf/d (See Shale Daily, Dec. 15, 2014). That well has a 5,800-foot lateral. Since then, two other wells have bested the Claysville.

EQT Corp. reported that its Utica Scotts Run well in Greene County, PA — to the south of the Claysville — had an IP rate of 72.9 MMcf/d (see Shale Daily, July 23). That well was drilled with a 3,221-foot lateral.

To the east, Consol Energy Inc.’s Gaut 4IH, a step-out well in Westmoreland County, PA, IP’d at more than 60 MMcf/d on a 5,840-foot lateral. Both Consol’s and EQT’s wells cost about $30 million to drill, complete and turn to sales — more than double the cost of some Utica wells in Ohio.

The recent success has been underscored by several other prolific dry gas wells in Southeast Ohio and Northern West Virginia over the last year, where operators have tested Utica wells between 25 MMcf/d and nearly 47 MMcf/d (see Shale Daily, Dec. 9, 2014; Sept. 25, 2014; Sept. 8, 2014; June 2, 2014; Feb. 14, 2014). Terry Engelder, a professor of geosciences at Pennsylvania State University, said those results from a tight, seven-county swath encompassing all three states have essentially proven the Utica’s potential in Southwest Pennsylvania. He cautioned, though, that there is not yet enough data to determine decline rates there.

“We have 614,000 acres in the Utica, 530,000 are 100% working interest acres that we really felt needed to be tested,” said Consol Vice President of Gas Operations Craig Neal in an interview with NGI’s Shale Daily. “Quite frankly, I’m glad we did; the results here have really driven us to look hard at comparing this to our Marcellus opportunities. We believe that we will get the cost down to under $15 million in the deep area and probably work our way down below that. Over in Monroe County, OH, we’re already at that level on our 10,000-foot total vertical depths, and we’ll be working our way down to much lower than $15 million, possibly even $12 million.”

EQT has said the same, aiming to lower Utica costs in Southwest Pennsylvania to between $12.5-14.5 million. EQT plans to drill a second Utica well in Greene County by the end of September, which would be about 13,400 feet deep and have up to a 4,500-foot lateral. Range is finishing up completions at its second Utica well in the region and plans to spud its third by the end of the year ahead of completion in 2016.

Neal said Consol is drilling its second Utica well in the state, the CNX GH9, four miles away from the Smiths Run well. Both EQT and Consol have said it would take a “few” of these wells to ultimately lower costs in the area.

“We think that [laterals] will get longer. We’re monitoring our ability to frack at those depths. This thing is in the range of 20,000 feet,” Neal said. “So, at those lengths, we are concerned about being able to stimulate it, see what the pressures would be.” Neal added that the company would use ceramic proppant on the CNX GH9 as it did on the Gaut well. EQT also used ceramic proppant on its Smiths Run well.

Consol is currently testing a five-well pad in Monroe County, OH, with conventional sand, resin coated sand and ceramic proppant to see what can work best at those depths.

“We believe that’s got to be tested just because of the extra cost on the ceramic.”

While companies are clearly planning more West Virginia Utica wells, a lack of data in Southwest Pennsylvania makes wells there more risky. The formation in Pennsylvania is about 3,000 feet deeper than the Marcellus. Challenges remain.

Engelder said fracture and stimulation could be difficult for some operators in Southwest Pennsylvania given the impermeability and low-porosity of the Utica there. While Neal said the Gaut well stimulated nicely, he added that it’s still uncharted territory that requires slightly different equipment.

“Running a deep string of nine-inch on wells here is certainly challenging,” he said. “The Salina in some areas is thicker and more problematic in drilling, those are the primary issues. It’s just you have to run your deep string with a larger rig; it eliminates top hole from most of the deeper strings when you get into this 13,000-foot total depth.”

Engelder added that managed choke programs would also be pivotal to preserving the integrity of the deep Utica wells. Rice Energy Inc. said it had recently drilled and completed its John Briggs 50U Utica well in western Greene County (see Shale Daily, Aug. 7). While it expects that well to be producing by the end of the third quarter, the company said it would not conduct an open hole test. All the producing Utica wells in Southwest Pennsylvania are currently on restricted choke.

“There are not that many penetrations this deep to where we have an understanding of what we are drilling through,” Neal said. “I’m not saying there’s none, certainly the Trenton-Black River development in certain areas gave us those pictures. The industry is going to learn it here and learn it fast, but you just don’t have the knowledge base that you did with the Marcellus from older wells that penetrated it.”

Earlier this month, EQT said it would phase-out its Upper Devonian drilling program in Pennsylvania and redirect that capital to the Utica after the Smiths Run test (see Shale Daily, Aug. 3). Range said it would stay focused on the Marcellus, but Ventura added that to “the extent we learn more about the Utica and to the extent the Utica economics ultimately compete with the Marcellus, then you may see us allocate some capital there in a very disciplined way in order to maximize our returns as we go forward.”

Consol is thinking the same way.

“We run economics on every pad and they really all compete for capital. We certainly, in the last month, have received information that tells us the deep dry Utica is now a higher rate of return than what we would have anticipated,” Neal said. “We have to get the costs down, but we expect to do that, and I think you will see dry Utica displace both the Marcellus and Upper Devonian drilling. But we have some attractive prospects in the Marcellus and Upper Devonian, as long as we are combining them with Marcellus or a recomplete.

“I don’t want you to think those are not attractive. It’s just that these [Utica wells] are likely better.”