As major expansions like the 3.25 Bcf/d Rover Pipeline and 1.7 Bcf/d Atlantic Sunrise approach full service, further growing Appalachian takeaway capacity, the wide basis differentials that once dogged the historically constrained Marcellus and Utica shale region are shrinking — a trend that could come into sharp relief this shoulder season. 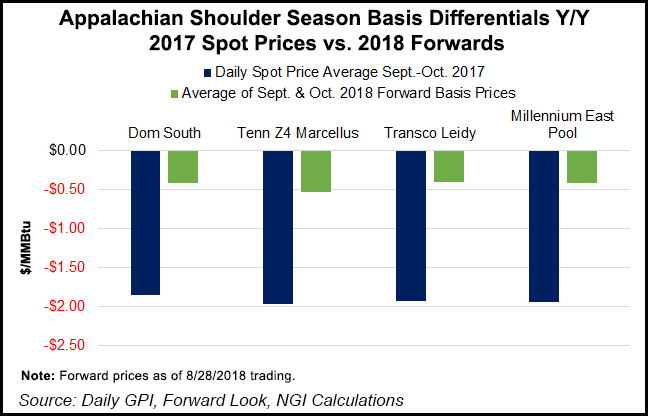 Recent basis trades at a number of key Appalachian hubs suggest Northeast producers could see substantially improved pricing this shoulder season compared with 2017 even as supply estimates show sharply higher output from the region. The dramatic shift in regional pricing has also coincided with new takeaway capacity and a starkly different storage picture this year compared to last.

After spot prices at Dominion South traded more than $2.00/MMBtu below Henry Hub at times during September and October 2017, the bellwether Appalachian location was priced in at a negative basis of just 42 cents for September bidweek, with October forwards recently priced at around 40 cents back of Henry.

Recent shoulder season pricing at other Appalachian points paints a similar picture. Forwards markets currently expect Transco Leidy Line and Millennium East Pool to see basis differentials shrink dramatically year/year (y/y) to around negative 40 cents for October 2018 versus spot prices that frequently traded around $1.50-2.00 back of Henry over the same period in 2017.

“After years of perpetual pipeline constraints, pipeline utilization data indicates that some Northeast takeaway pipelines have a little bit of capacity to spare — a trend that has major implications for regional pricing relative to downstream markets,” RBN Energy LLC analyst Sheetal Nasta said in a recent note to clients. “At the same time, more pipeline expansions are on the horizon that promise to bring on even more gas supply from Marcellus/Utica producers,” including recent developments suggesting new capacity from Rover and Atlantic Sunrise is imminent.

Changes in forward basis at Dominion South from Aug. 21-28 — a period that saw Rover Pipeline LLC announce a Sept. 1 start date for the Majorsville and Burgettstown supply laterals — were muted, with Forward Look prices showing September flat to where it traded a week earlier.

This lack of price response to the prospect of additional takeaway further indicates that pricing dynamics in Appalachia are less impacted by transportation bottlenecks out of the region compared to years past, at least in and around Dominion’s South Pool.

“In Southwest Appalachia, rig activity has slumped over the last few months, so with the incremental takeaway from” Nexus Gas Transmission and Gulf XPress “still slated to come online later this year, plus Rover’s increased effective capacity” scheduled to enter service over the Labor Day weekend, “it is certainly possible that there will be routes with open capacity,” BTU Analytics analyst Jake Fells told NGI.

The negative basis at Dominion coincided with the shift to net exports out of the Mid-Atlantic region in the summer of 2013, Genscape Inc. analysts Eric Fell and Margaret Jones said.

“Each of the last four summers, we have seen significant basis blowouts toward the end of the summer” because of production continually outpacing pipeline export capacity, Fell and Jones said. “Genscape’s infrastructure tracking and East regional analysis has long been showing 2018 as the year that new capacity additions would outpace growing production to deconstrain the Mid-Atlantic.

“August 2018 has seen an additional 7 Bcf of takeaway capacity versus August 2017, and capacity is expected to continue to expand with projects like Atlantic Sunrise (around 1.1 Bcf/d capacity still remaining) and Nexus (about 1.5 Bcf/d) due to come online before the end of the year.”

Strong demand has also contributed to stronger cash basis at Dominion this summer, as storage in the East region is on track to end October at 880 Bcf by Genscape’s estimates, 43 Bcf below year-ago levels.

Meanwhile, forwards at eastern Marcellus locations seemed to perk up a bit at the prospect of Atlantic Sunrise entering service.

Late last month, Transcontinental Gas Pipe Line Co. LLC (Transco) firmed up its plans to place Atlantic Sunrise into service by Sept. 10. Even though this fits in with the general timeline previously provided by the operator, forwards for eastern Marcellus locations strengthened following Transco’s announcement, especially for the September contract.

“We believe when Atlantic Sunrise comes online, it will create a window where the local price should narrow vs Henry Hub; we estimate minus 30 cents while there is spare capacity (better than the forward curve suggests later this year),” analysts with Sanford C. Bernstein & Co. LLC recently said. “However, we forecast that the pipe will fill within a year, and differentials will go back to being wide.

“This has proven somewhat controversial, with some investors noting their belief that” Atlantic Sunrise capacity holder Cabot Oil & Gas Corp. “will enforce ”discipline’ and keep the pipes from running full,” said analysts Jean Ann Salisbury and Bob Brackett. “This seems unlikely to us when we look at how prolific each rig is.” The number of rigs needed to keep production at a longstanding takeaway cap of 9 Bcf/d “has averaged 11 over the past two years” including some drilled but uncompleted wells. This total “has ticked up to 15 over 2018.”

Another four rigs would be enough to fill the Atlantic Sunrise capacity and increase the region’s output to 10.5 Bcf/d within a year, according to the Bernstein analysts.

The prospect of more output from the Northeast could be disheartening for natural gas bulls.

RBN’s Nasta said the Marcellus/Utica has been the driving force behind a surge in domestic production over the past year, which has weighed heavily on futures prices despite otherwise bullish factors including a hot summer and a hefty year-on-five-year inventory deficit.

Average production growth of 82 Bcf/d for August “sits nearly 9.4 Bcf/d higher than this time last year, and the year-to-date average — roughly 79 Bcf/d — is a full 8 Bcf/d ahead of the same period in 2017. That amounts to the biggest y/y jump in production this decade by far,” Nasta said. Even as demand has managed to keep pace with production growth and limit storage injections, “market participants are savvy to the fact that while weather-related demand will follow temperatures lower as summer gives way to fall over the next couple months, that incremental 8 Bcf/d of production isn’t going anywhere — and that there’s more on the way.

“There is a lingering angst that oversupply conditions are around the corner, and it’s not unfounded, despite the bullish inventory levels,” she said. Even as exports and baseload demand grow, “Lower 48 demand hasn’t reached a point where it can absorb all the new supply growth without the help of some extreme weather conditions.”

Looking specifically at the Northeast, the region’s production has averaged around 27 Bcf/d year-to-date, up about 4 Bcf/d y/y, accounting for close to half of the overall ramp-up in Lower 48 output over that period, according to Nasta.

Long-term takeaway constraints for years have “resulted in some gaping price spreads between Appalachia and destination markets in the Midwest and Gulf Coast regions,” according to Nasta. “The combination of abundant, low-cost supply and attractive price spreads has enticed massive development in both the midstream and demand sectors, but also presumably has held Northeast producers back.

“However, now, the already much-evolved Northeast region is undergoing yet another sea change and reaching an inflection point in its constraint-laden saga.”

Indeed, forwards show downstream destination markets for Appalachian supply trending lower recently. Over the same Aug. 21-28 period that saw the Rover and Atlantic Sunrise announcements circulate, forward basis at Dawn weakened across the strip, with December shedding 5.5 cents to trade at just a 4.8-cent premium to Henry, versus a premium of 10.3 cents a week earlier.

Chicago Citygate forward basis saw similar declines for the period, with the October, November and December contracts all easing by more than nickel, including October basis widening to negative 18.4 cents.