New measurements released last week by Kayrros quantifying emissions across the Appalachian Basin show the region is the biggest source of methane in the United States. 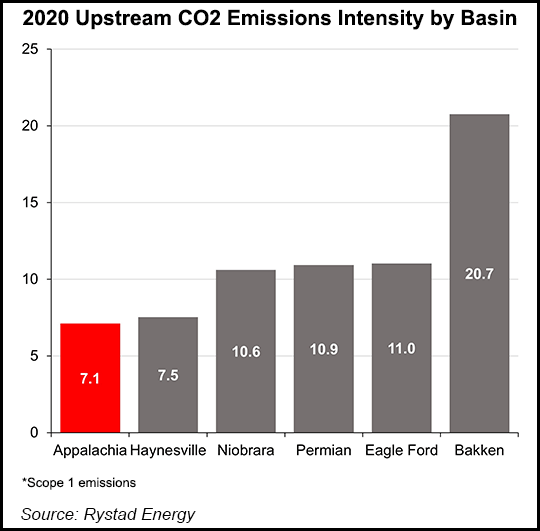 Kayrros, which uses satellites and other methods to track emissions, said methane from Appalachia exceeds even the country’s most active oil and gas fields in the Permian Basin. But Pennsylvania, Ohio, West Virginia and Kentucky are home to prolific natural gas and coal production. Methane emissions from the resources combine to outweigh those from other extraction states.

Across both basins, Kayrros said emissions fell by 20% in Appalachia and by 26% in the Permian last year, “largely due to the impact of the Covid pandemic on energy demand.” The company added that the “variation in the percentage decreases can be traced to the differing energy mixes within each basin.”

Oil and gas representatives in Appalachia were quick to point out that Kayrros’ measurements also include coal emissions. The company, which monitors and measures energy and natural resource activity worldwide for customers analyzing industrial and environmental performance, did not release specifics on its data.

Another analysis released last week by Rystad Energy found that operators in Appalachia had the lowest carbon dioxide emissions intensity of any onshore fields across the country. Rystad found that Scope 1 emissions, or those directly controlled by producers, were 7.1 kilograms per boe in 2020.

“Such a level of CO2 intensity performance brings Appalachia to the top quartile among all oil and gas fields globally,” said Rystad analyst Emily McClain. “As the basin becomes more mature and modern, and environmental, social and governance best practices are implemented, we anticipate Appalachia to improve further in its CO2 intensity dimension in the next three to four years.”

Methane is a far more potent greenhouse gas than carbon dioxide. Operators across the basin are working to better monitor and curb their emissions by transitioning to all electric hydraulic fracturing fleets and implementing special measures.

Appalachian pure-play EQT Corp., the nation’s largest natural gas producer, is pushing to ensure most of its supply is responsibly sourced through pilot programs to environmentally certify about 4 Bcf/d gross of production with Equitable Origin and Project Canary. The programs would also quantify methane emissions.

In response to the Rystad analysis, Marcellus Shale Coalition President David Callahan said Appalachia’s natural gas operators have a longstanding commitment to “best-in-class” environmental standards that have made the region one of the most “environmentally responsible” producing regions.

“With methane being the very product operators produce and sell, we have every incentive to efficiently capture and deliver it to market,” he added.

Kayrros also noted that its findings demonstrate that “large methane emissions cannot simply be considered as an unavoidable side effect of production but rather the avoidable consequence of various factors such as insufficient or poorly maintained infrastructure for natural gas gathering, processing and transportation.”

Indeed, a report released last week by Columbia University’s Center on Global Energy Policy said fortifying and upgrading the nation’s natural gas infrastructure could prepare the systems to transport zero-carbon fuels such as green hydrogen and, in the meantime, reduce harmful methane leaks.