With robust production growth in the Appalachian Basin and extensive infrastructure expansions on both sides of the U.S. and Canadian borders, the Midcontinent and Gulf Coast will be awash in natural gas over the next five years, according to three industry experts who spoke Tuesday at an energy forum in Chicago. 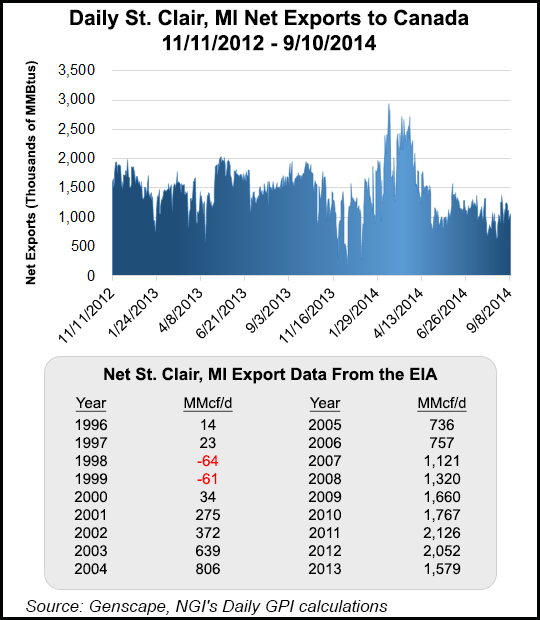 Canada-based Union is banking on new infrastructure tied to its Dawn storage hub in Ontario, and TransCanada bids to leverage the strategic advantages it holds with its ANR pipelines and storage that serve North America.

ANR has one project to connect with Utica/Marcellus gas, enabling it to access multiple markets downstream of the system (see Daily GPI, July 9). The scalable, multi-part project would allow the gas to access the Midwest, Gulf Coast and Dawn.

“Why Dawn?” Mastronardi asked rhetorically. “We’re the largest natural gas integrated storage facility in Canada and the third largest traded natural gas hub in North America. We have access to reliable and plentiful natural gas supplies in the Utica and Marcellus and access to markets in eastern Canada, the U.S. Northeast and Midwest.”

Hampton emphasized that TransCanada intends to exploit the strategic advantages of its ANR pipeline/storage assets, given the projections for robust growth for the Marcellus and Utica plays. In 2007, TransCanada acquired ANR, Michigan storage assets and a 50% interest in Great Lakes Gas Transmission from El Paso Natural Gas (see Daily GPI, Feb. 23, 2007).

“All the projections now show the Marcellus becoming the largest gas producing basin in North American history, and most projections on production are showing it will hit more than 25 Bcf/d,” Hampton said. As a result, he said TransCanada has had four open seasons from 2013 through last winter to open up the number of delivery points in the Northeast basin.

The Utica may offer the lowest prices to serve the Midcontinent region, but Hampton said the Marcellus-Utica production growth is “the real deal,”and in a relatively short time [it] will lead North America in natural gas production.

Bentek Energy energy analysis director Jack Weixel estimated that the Midcontinent has 11 Bcf/d of planned pipeline capacity additions, and said there will be 4 Bcf/d of added production in the Marcellus and Utica formations between 2013 and 2016.

He noted that there is “a lot of supply out there” nationwide, led by the Marcellus, and the U.S. Northeast would be a net exporter of gas beginning in 2015.

“There are just a lot of projects out there going forward,” said Weixel. “By 2016 there will be 4.6 Bcf/d of added capacity into the Midcontinent.”

When they are more closely analyzed, the Marcellus Shale and the Louisiana Gulf Coast look like two of the leading U.S. pots of gold for robust natural gas growth, the panelists said.

Weixel looked beyond the already bullish projections for production growth in the Marcellus, and Hampton similarly outlined a more robust forecast for the Louisiana Gulf Coast as a market center for increased gas production.

Projecting 4 Bcf/d of added gas production (2013-16) in the Marcellus-Utica shale plays, Weixel’s analysis included a review of uncompleted wells in a region that includes Ohio, southwest Pennsylvania, West Virginia and northeast Pennsylvania. In that area, there could be another 5-10 Bcf/d of “trapped” production.

Weixel’s numbers crunching comes up with 1,862 of uncompleted wells in the region currently — 417 in Utica, 581 in parts of southwestern Pennsylvania and West Virginia, and 864 in northeastern Pennsylvania. “This is an indication of future production,” he said. “The 5-10 Bcf/d is just what you’d get if you completed those wells and stop drilling everywhere today.”

Based on Hampton’s projections, the use of gas in the industrial sector in Louisiana will increase by 18% between now and 2025. That’s the equivalent of an added 1 Bcf/d for industrial use in the state, he said.

In addition, the three proposed liquefied natural gas (LNG) export facilities on the state’s coast should bring in another 5.2 Bcf/d of added supplies headed for the Gulf Coast, Hampton said.

TransCanada’s ANR is eyeing the opportunity to serve this growing gas demand in Louisiana through existing and planned expansion of Midcontinent infrastructure to steer production to the south.

“We’re developing new laterals to help facilitate service to the proposed LNG export terminals,” Hampton said. “ANR is a significant regional pipeline in the Midcontinent.” He reiterated that TransCanada sees the Utica and Marcellus supplies becoming more significant sources of gas, not only for the south, but also the upper Midwest parts of the Midcontinent, and that ANR is “well positioned” to be a key player in both market regions.