A decline in U.S. natural gas is a sure thing in 2016, but it won’t fade as much as some are predicting because of the Appalachian behemoth, Raymond James & Associates said Monday. 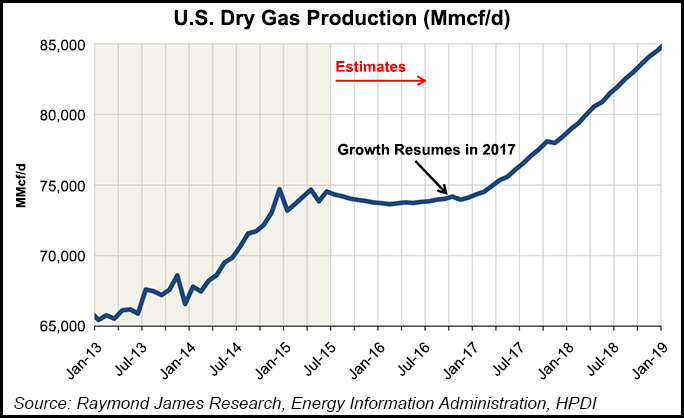 Some Wall Street pundits have focused on the impact to associated gas supplies as oil rigs are dropped. For example, a Citigroup Inc. analyst said last week if the U.S. oil rig count remained in its slump, the decline in associated gas output would leave the market short of gas in 2016 before rebounding in 2017 (see Daily GPI, Sept. 18).

The conclusion is sound, but “it only tells half the story,” said Raymond James analysts J. Marshall Adkins, Graham Price, Carlos Newall and John Woodiel. Domestic gas supplies likely are going to fall in 2016 “but only modestly” because of continued growth from the Marcellus/Utica shales. Unlike the oil markets, “we are NOT likely to see a large dip in gas production in 2016.”

Raymond James new forecast includes updated assumptions regarding efficiency gains and the rig count. Analysts now expect to see productivity gains for modeled gas plays continuing to increase by 27% in 2015 and 15% in 2016, driven by big contributions from the Northeast and the Haynesville Shale. Summer-ending storage this year is forecast to end at 3.9 Tcf, with storage at the end of 2016’s summer ending at 4.1 Tcf. That compares with a previous forecast of 3.8 Tcf for each year.

In 2017 and beyond, Raymond James is in agreement with some of its peers. Oil-related drilling should rebound, along with associated gas, while drilling efficiency gains also should continue.

The Raymond James estimate for 2017 doesn’t take into account the effect of incremental production in the Northeast as more takeaway capacity comes online, which would allow producers to ramp up shuttered wells and start up drilled-but-uncompleted projects.

Debottlenecking in the Appalachian Basin alone could add another 1.5 Bcf/d to the current 2016 year/year supply forecast.

“Either way, the U.S. will likely see strong continued gas production growth in 2017 and beyond, leading to natural gas storage levels that bump up against the theoretical U.S. gas storage limit of around 4 Tcf,” said Adkins.

As more gas deliverability flows from the Northeast, the United States may not need 3.5 Tcf in storage to meet winter demand peaks. according to Raymond James. However, more gas supplies means U.S. prices “will remain under pressure for an extended period of time.”