Bearish indicators are not in short supply for the natural gas market, but forward prices staged a meaningful comeback during the May 14-20 period, according to NGI’s Forward Look. 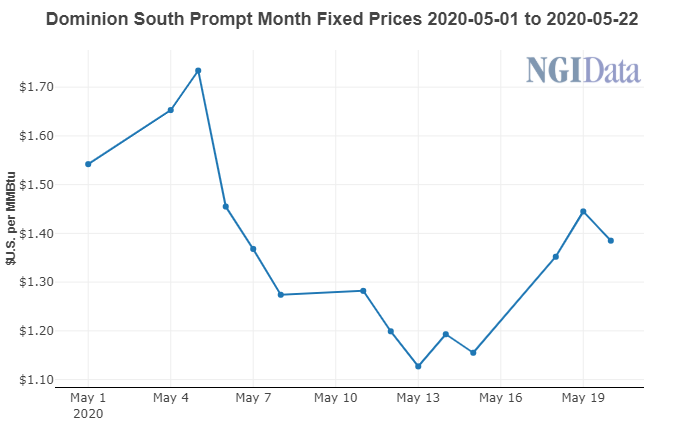 The biggest gains — to the tune of about 20 cents for the June contract — were in Appalachia, where markets responded swiftly to news that EQT Corp. is curtailing 1.4 Bcf/d of production now to take advantage of higher prices later this year.

June forward prices climbed an average 11.0 cents for the six-day period, while the balance of summer (June-October) tacked on 3.0 cents on average, Forward Look data show. Further out the curve, the winter strip (November-March) slipped by an average 2.0 cents, as did prices for next summer.

A similar pattern was seen along the Nymex Henry Hub futures curve, with the June contract picking up around 9.0 cents from May 14-20 to reach $1.770, and the rest of the curve shifting less than 5.0 cents.

By comparison, Appalachia’s Dominion South jumped 19.0 cents to $1.385 for the June contract, and the balance of summer climbed 8.0 cents to $1.410. The rest of the curve was more in line with Nymex futures and other markets across the country, slipping a couple of pennies for both the upcoming winter and next summer.

Management for Appalachia pure-play EQT, the largest natural gas producer in the country, joins peers in the Marcellus and Utica shales in deferring some production. EQT produced 4.2 Bcfe/d in 1Q2020. The cut of about 1.4 Bcf/d of Appalachia gas by EQT has helped lower regional production volumes to an average 30.7 Bcf/d since May 16, which is 1.2 Bcf/d below March levels, according to Goldman Sach Research analysts. If these levels are maintained through the end of the month, average Northeast production for May would fall in line with Goldman’s existing 31.3 Bcf/d average May forecast.

Goldman analysts had already lowered May expectations following the Texas Eastern Transmission (Tetco) pipeline explosion earlier this month, “though local production had since remained better supported than our expectations, partly helped by heating-related demand in the region. Though our May production forecast, as a result, remains unchanged, we lower our June production numbers by 0.6 Bcf/d to match current Appalachia production levels,” which is in line with Equitrans Midstream Corp.’s assumption that the production curtailment would last 45 days.

As for the Tetco explosion, the pipeline released an update regarding the force majeure following the incident on its 30-inch diameter system Line 10 near Owingsville, KY. Notably, it expected to complete construction and preparations for Line 25 to return to service by Sunday (May 24).

“Capacity at Owingsville remains at zero, however, a significant amount of gas is reported to flow south through the compressor, up to 480 MMcf/d since the explosion,” said Genscape Inc. analyst Josh Garcia. “This could be due to upstream and downstream compression.”

It remains to be seen if Line 25’s return to service would restore capacity to around 800 MMcf/d as it did during the Danville explosion last August, or around 800 MMcf/d on top of what is already flowing, Garcia said.

Outside of Appalachia, the natural gas market stands to be a battleground for bulls and bears in the coming months. Working in favor of bulls is a continued pullback in gas production, which Rystad Energy is forecasting will decline every month until November, when it would reach a projected trough of 82.5 Bcf/d from 94 Bcf/d in November 2019 because of Covid-19-related shut-ins and the falling rig count.

Also making the case for bulls is growing demand for natural gas as economies reopen. Genscape recently indicated that gas demand for ethanol production had started to recover. From a high of 580 MMcf/d in mid-January, the firm’s sample gas demand from ethanol plants dropped to as low as 316 MMcf/d on May 5. However, since then, the number has trended upward and reached 386 MMcf/d for Thursday.

Meanwhile, though not expected to become widespread until later this summer, temperatures across Texas are heating up, with population-dense cities like Houston already seeing highs near the century mark. The increased cooling demand, in combination with easing restrictions amid the coronavirus, was evident in the latest government storage data.

The U.S. Energy Information Administration (EIA) reported on Thursday that storage inventories for the week ending May 15 rose by 81 Bcf, a slightly lighter-than-expected figure that some market observers partially attributed to the need to dial down the thermostat across the Lone Star State.

Another participant in the online chat pointed out that many people working from home have their home air-conditioning (AC) units turned on, while any businesses with more than 10% of staff back in the office also are running ACs.

Broken down by region, the Midwest added 22 Bcf into storage, as did the South Central, which included an 18 Bcf build in nonsalt facilities and a 5 Bcf build in salts, according to EIA. East inventories rose by 17 Bcf, Pacific stocks increased by 13 Bcf and Mountain stocks added 7 Bcf.

Despite the seemingly improving backdrop, liquefied natural gas (LNG) demand may be one hurdle that bulls can’t so easily stomp out of their way.

With the May 20 deadline for July cancellations in the rearview mirror, estimates on the number of canceled U.S. cargoes continue to emerge. Shipbroker Poten & Partners has indicated that U.S. cancellations are expected in July, with more than 20 each month from August to October, given the uneconomic spread between the United States and key markets overseas.

Goldman analysts noted the steep decline in feed gas deliveries to Lower 48 terminals in the last week, which stood Friday at around 5.5 million Dth. The decline suggests total U.S. LNG export cancellations in June-October may be about 1 Bcf/d higher than the 2.3 Bcf/d Goldman currently assumes for the period.

However, while this implies a softening risk to summer 2020 balances, Goldman analysts said they “would prefer to rely on more than one week worth of data” before they revise the balance of summer cancellations and gas price forecast. “Further, we note that other shifts in demand and/or in production can quickly swing the balance the other way.”

A 1 Bcf/d increase in U.S. export cancellations versus Goldman’s forecast would lift expected end-summer storage to more than 4.3 Tcf. All else constant, this scenario would require the balance of summer gas prices to move about 40 cents lower versus forwards to increase coal-to-gas substitution and keep end-October storage from breaching capacity, the firm said.

“However, this pressure could quickly be offset by lower-than-expected production (or faster-than-expected demand recovery). As a result, for the moment, we maintain our $2.04/MMBtu balance of summer Nymex gas price forecast, which is in line with forward prices as of May 19.”

The small boost in Northern California gas prices comes as Pacific Gas & Electric Corp. storage inventory is trending above the previous three-year average for this time of year. Nevertheless, prices for the winter are trending well above year-ago levels as stocks continue to lag the five-year average.

At about 185 Bcf, PG&E’s total gas in storage is more than 15% higher than the average across 2017-2019, according to Genscape. This includes gas in both core and noncore storage facilities.

“So far, these robust inventories have been driven by two factors: PG&E coming out of the winter with more gas in the ground than normal, and larger-than-average injections over the first month and a half of summer,” Genscape analyst Joseph Bernardi said.

On April 1, PG&E’s inventory was 119% of the previous three-year average for that date, according to Bernardi. From April to date, it has also both posted the second-largest average inventory increases in the last five years, trailing only last year.