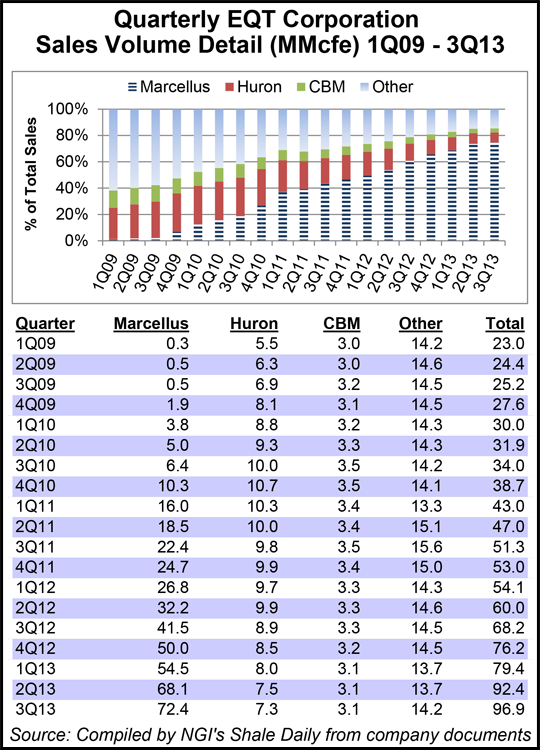 Management discussed the solid quarterly performance during a conference call. The gains, as many of its peers continue to affirm, center around the Northeast growth, and more to the point, the Marcellus, CFO Phil Conti told analysts.

Midstream results, he said, were up 54% from 3Q2012, “consistent with the result, and net gathering was 19% higher. There also was a 43% increase in gathering volumes. Marcellus production continues to grow. Average revenue for midstream should continue to grow as the Marcellus business expands.” It puts EQT and its units in a “great position from a liquidity standpoint,” said Conti.

“Operationally, EQT is coming off another record quarter,” CEO Dave Porges said. “We have discussed the lumpiness of volume growth that resulted from turning these big multi-well pads inline…That was evident in the third quarter. Some of our projected fourth quarter volumes accelerated into the third quarter,” which in turn flowed into the pipeline systems where there was an uptick as well.

Beyond the Marcellus, EQT also has moved ahead in Ohio, where it has three Utica Shale wells and is planning to complete five more before the end of the year.

“From a volume perspective, the wells are not eye popping,” said Porges, “but we still find them attractive because we see a significantly high amount of oil and a very high BTU gas. They average 42% oil, 28% natural gas liquids, mostly ethane, and 30% gas.

“When processing is available, we’ll be able to receive a premium price by stripping out the gas and selling it…When you use today’s prices for average 30-day rates for the Utica wells, the average gas rate would be 9 MMcf/d…We’re on track to drill eight this year.”

However, don’t look for EQT to add to its Utica position, which today is all in Ohio. There are so many operators scrambling to the Utica that the price of land has risen. And the acreage being offered isn’t worth the price, at least to EQT, Porges said.

From July through September, EQT Production’s sales volumes totaled 96.9 Bcfe, an average of 1.0 Bcfe/d, driven by the Marcellus, which averaged 787 MMcfe/d.