The United States has 2,384 Tcf of technically recoverable natural gas, the Potential Gas Committee (PGC) and the American Gas Association (AGA) said Tuesday. That’s more reserves than the PGC has calculated in its 48-year history and beats the previous high seen in 2010 by 486 Tcf. 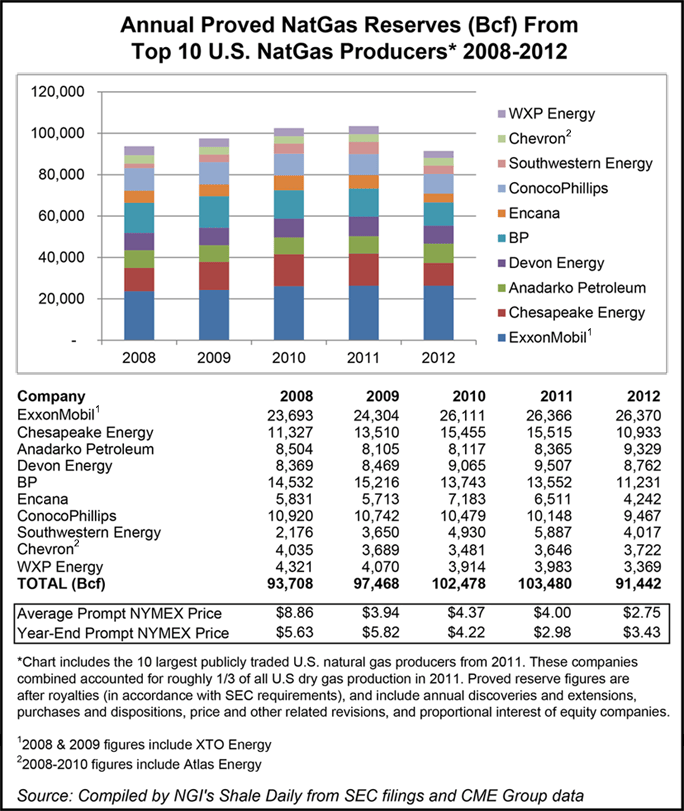 The findings are from the associations’ 2012 biennial report “Potential Supply of Natural Gas in the United States” and underscores the oil and gas industry’s continued success in developing the country’s shale gas resources. The Marcellus Shale was particularly well represented in the tally of gas reserves, and the play has a lot more to give, an executive involved in the research told NGI’s Shale Daily.

“This ground up, science-based assessment emphasizes our nation’s robust supply of natural gas and confirms that we can continue to rely on abundant, clean natural gas for our future energy needs,” said AGA CEO Dave McCurdy. “By investing in our energy future and harnessing the promises of this resource, we can look forward to decades of market stability — and that’s great news for our customers.”

For the next decade and beyond, domestic natural gas supplies are expected to be high enough to support an increase in demand across all sectors — unlocking the door for expansion in residential, business, transportation and commercial and industrial applications, the associations said Tuesday.

The committee’s year-end 2012 assessment of 2,384 Tcf includes 2,226 Tcf of gas potentially recoverable from traditional reservoirs (conventional, tight sands and carbonates, and shales) and 158 Tcf in coalbed reservoirs. Compared to year-end 2010, assessed traditional resources increased by 486.4 Tcf (28%), while coalbed gas resources declined by a nominal 0.4 Tcf (0.2%), resulting in a net increase in total potential resources of 486.1 Tcf (25.6%).

When the PGC’s assessments of technically recoverable resources are combined with the U.S. Department of Energy’s latest available determination of proved reserves — 305 Tcf (dry gas) as of year-end 2010 — the United States has a total available future supply of 2,688 Tcf, an increase of 486 Tcf over the previous evaluation, PGC said.

“The PGC’s year-end 2012 assessment reaffirms the committee’s conviction that abundant, recoverable natural gas resources exist within our borders, both onshore and offshore, and in all types of reservoirs — from conventional, ‘tight’ and shales, to coals,” said John B. Curtis, professor of geology and geological engineering at the Colorado School of Mines and director of its Potential Gas Agency, which provides guidance and technical assistance to the PGC.

Curtis cautioned that the current assessment assumes neither a time schedule nor a specific market price for the discovery and production of future gas supply. “Assessments of the Potential Gas Committee represent our best understanding of the geological endowment of the technically recoverable natural gas resource of the United States,” he said.

“No other energy source has the potential to improve air quality, boost our economy and add to our nation’s energy security on such a large scale,” ANGA said. “This year’s assessment shows that the total potential resource is 26% higher than any previous finding, which should bring comfort to those concerned about our ability to provide robust supplies of natural gas at affordable prices for decades to come.”

Peter Molinaro, Dow Chemical Co. vice president of federal and state government affairs, participated in a Ballard Spahr LLP webinar on liquefied natural gas (LNG) exports on Tuesday. Dow has been a vocal critic of LNG exports, raising concerns that exports would drive up domestic gas prices, and Molinaro said the company is not convinced that the energy industry can keep up with domestic demand for natural gas.

“Our concerns would be significantly moderated if we had higher confidence that the supply side could really keep up. We’ve been through this disconnect of supply and demand in the past. Some of it was virtual; some of it was real. But when supply and demand become disconnected, the manufacturing sector is sort of the canary in the coal mine. The demand destruction that has to occur to balance markets really occurs on the back of manufacturers.”

Chris McGill, AGA vice president of policy analysis, said the fact that gas deliverability has not been affected by producer’s drilling pullback due to low prices demonstrates that the gas market is still looking for equilibrium. “My view is still we have an abundant resource; we have a strong production capability position. What we’re lacking today still is a more consistent vision of where the demand picture is going, looking for that abundant demand opportunity,” he said.

Some of that demand likely will come from LNG exports; in addition, power generation and natural gas vehicles are seen as demand bright spots. Meanwhile, some local distribution companies have been working to expand their pipeline distribution systems to connect new customers.

Most of the increase in the assessment arose from new evaluations of shale gas resources in the Atlantic, Rocky Mountain and Gulf Coast areas, PGC said. These changes have been assessed in addition to 49 Tcf of domestic marketed-gas production estimated for the two-year period since the Committee’s previous assessment. As a result of a substantial increase in the assessment of Appalachian Basin shale gas, the PGC now ranks the Atlantic area as the country’s richest resource area with 33% of total U.S. traditional resources, followed by the Gulf Coast (including the Gulf of Mexico) and Rocky Mountain areas, which together account for 76% of the assessed total traditional resource.

Changes in the total assessment from 2010 to 2012 arose primarily from analyses of recent drilling, well test and production data from these three regions. The largest volumetric and percentage gains were reported for Appalachian Basin shales (primarily the Marcellus but including other Devonian shales and the Utica Shale), which collectively rose by 335 Tcf (147%). A substantial increase, 21.6 Tcf (58%), also was made for the Eagle Ford Shale in the Texas Gulf Coast basin, PGC said.

“One thing that made a difference was that because of the Pennsylvania and in some cases West Virginia slowness of getting out the production data, the things that we were looking at for this release were for wells that were completed, say, four years ago,” Curtis said.

He added that the assessment didn’t assign any potential to “a fairly large amount of the Marcellus to any degree because we don’t have any wells there. We didn’t push it. There’s still upside on the Marcellus.”

Cretaceous shales in the Rocky Mountain area figured prominently in new record-high assessments for the Greater Green River basin (Baxter and Hilliard Shales) and San Juan basin (Mancos and Lewis Shales), in each case more than double the province’s total potential gas assessment for 2010. Re-evaluation of another unconventional resource, the Niobrara Formation, led to a new record assessment of 7.5 Tcf for the Denver basin, a jump of nearly 3.5 Tcf (86%), PGC said.

But not all is positive on the natural gas reserves front, at least not from an accounting standpoint. Technically recoverable gas reserves in the United States may be at an all time high, but proved U.S. reserves at today’s prices appear to have declined year over year in 2012. As shown in the accompanying chart, NGI’s Shale Daily estimates that proved reserves for 10 of the leading U.S. natural gas producers fell 12% to 91.4 Tcf in 2012, the lowest figure for this group over the last five years. Much of this decline is the result of price-related write-offs, in accordance with U.S. Securities and Exchange Commission (SEC) reporting requirements. For example, Chesapeake Energy wrote down 5,414 Bcf of proved undeveloped reserves in 2012, mostly in the Barnett and Haynesville shale regions, because those reserves could not be developed at lower natural gas prices.

The growing importance of shale gas is substantiated by the fact that the PGC’s total assessed shale gas resource of 1,073 Tcf for 2012 accounts for about 48% of the country’s total traditional potential resources.

“Our knowledge of the geological endowment of technically recoverable gas continues to improve with each assessment,” Curtis said. “Furthermore, new and advanced exploration, well drilling, completion and stimulation technologies are allowing us increasingly better delineation of and access to domestic gas resources — especially ‘unconventional’ gas — which, not all that long ago, were considered impractical or uneconomical to pursue.