Political acrimony over the 2020 presidential election results has endured well into the new year, but the American Petroleum Institute (API) sees at least one area where U.S. voters have reached a consensus. 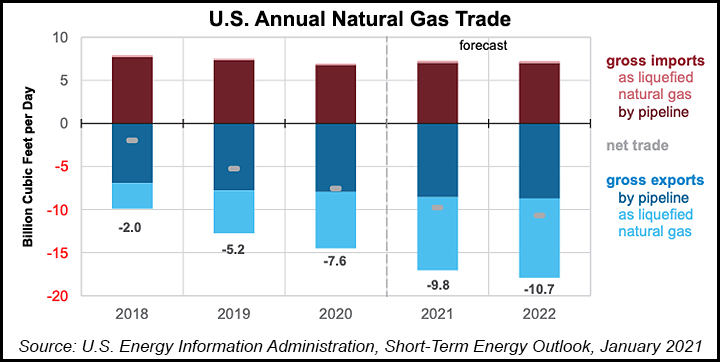 The Democrats obtained a narrow majority in the Senate that would see them take control of both the Legislative and Executive branches this year. Still, that doesn’t mean voters have rejected the benefits of American energy dominance.

“We’re confident that the American people have elected a pro-energy majority in both the House and the United States Senate, and we’re looking forward to working with them on the key priorities of this industry going forward,” API CEO Mike Sommers said Wednesday.

Speaking during a conference call with reporters following the lobbying group’s annual State of American Energy event, held virtually this year, Sommers emphasized one key issue that could be a point of strife between the industry and the new Democratic majority — a potential ban on oil and gas development on federal lands.

“A lot of the proposals that have been put forward during the campaign by the incoming Biden administration, I would term them as an ‘import more oil policy,’ because we know the world is going to continue to consume these products,” he said. He added that would continue even under a scenario where countries move to implement the measures outlined in the United Nations 2015 climate accord, better known as the Paris Agreement.

Biden is set to take office next Wednesday (Jan. 20) from “a position of strength” when it comes to energy, enjoying “tremendous advantages” as a direct result of the oil and gas industry’s contributions over the last decade toward making the country energy independent, he said.

Any move to ban hydraulic fracturing, or fracking as it’s more commonly referred to during political debates, would likely have the opposite of its intended effect, assuming the goal is environmental protection, according to Sommers.

“Our study actually suggests there would be reverse fuel switching” from natural gas back to coal “that would happen if you ban fracking…We think that is the exact opposite thing we should be doing from an environmental perspective,” he said.

While Biden won’t have blanket authority to ban fracking, the administration’s apparent openness to banning oil and gas development on federal lands has API’s membership concerned.

“Combining federal lands and the Gulf of Mexico in particular, that’s about 25% of American energy production, and if we’re going to be able to provide affordable and reliable and cleaner fuels to the American people, we need to have continued access to those lands,” Sommers said. “…We hope they change course on that kind of draconian policy that they’ve put forward, because I think the consequences of that would be devastating not just to the industry but to the American consumer.”

Still, there are a range of issues where Sommers believes the lobbying group may be able to find common ground with the new leadership in Washington.

For one, the industry has been proactively working to limit methane emissions, an area where the Biden administration is expected to pursue stricter standards.

“We know this administration is going to want to further regulate methane, and we want to be at the table,” Sommers said. “I think that they’ll find in the discussions with us that we’re a willing partner to make sure that they get this right, because I do think increasingly it is a social-license-to-operate issue that we’re going to have to deal with in the United States and abroad.”

Alluding to the more interventionist mindset of the Trump administration when it comes to trade policy, Sommers expressed hope that the industry also would find agreement with Biden’s team on matters of energy exports.

“Because of our abundance and the bounty of energy that we have in the United States, we want to be able to export the environmental progress that has occurred in this country” as a result of coal-to-gas switching in the power sector, Sommers said. “China and India, for example, continue to get most of their energy from coal. If we’re able to open overseas markets to U.S. liquefied natural gas, we’re able to export that same environmental progress.”

In this way, trade policy represents an opportunity for the United States to both pursue global environmental goals and “open up other markets for American energy products,” he said.

Asked about what moves made during the Trump era he would like to see endure, Sommers reiterated the importance of keeping federal lands and waters open to energy development.

Beyond that, he also highlighted efforts to reform the National Environmental Policy Act (NEPA) to speed up the process of citing new pipelines.

“On NEPA in particular, that is a goal we actually share with some representatives in the renewable community,” Sommers said. “…If you’re going to build out wind and solar farms, then you’re going to need the kind of NEPA reform we’ve advocated.”