The American Petroleum Institute (API) emphasized the U.S. role as an energy leader as it outlined steps lawmakers should take to “make, move and improve” the oil and gas industry at a recent event. 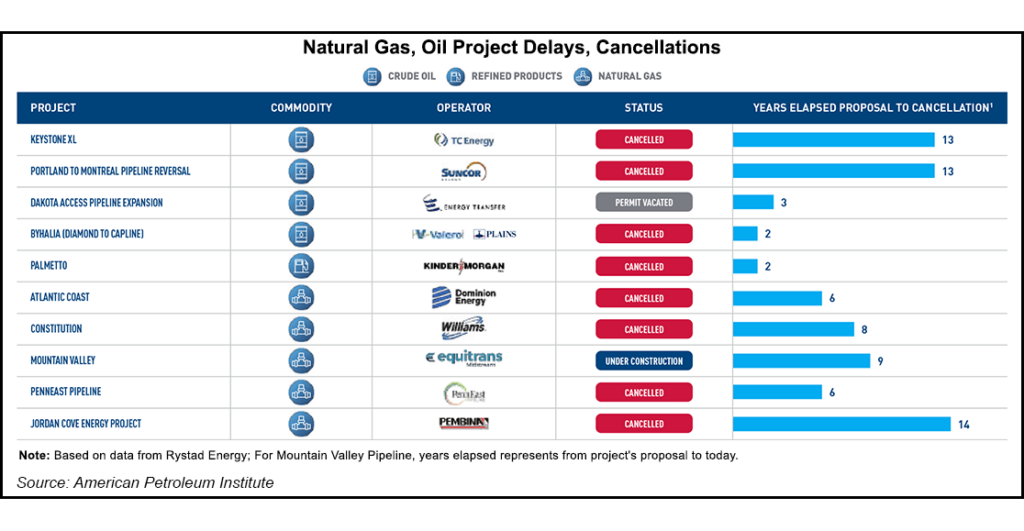 “In the past year, the global energy crisis, driven by surging post-pandemic demand outstripping supply and exacerbated by Russia’s invasion of Ukraine, has shown that the world needs American energy leadership now more than ever,” said CEO Mike Sommers earlier this month.

Sommers called on the 118th Congress to lift restrictions on natural gas and oil development in federal waters to meet increasing demand in the post-Covid-19 era.

The API, which issued a 2023 State of American Energy Report at the event, noted that over the last 15 years, 10 major natural gas and oil infrastructure projects in Appalachia have been canceled or delayed. These projects, if pushed forward, would have supported 4.6 Bcf/d in production and represented about $34 billion in capital expenditures, according to API.

The picture for U.S. LNG permits has been even bleaker, API said in its report.

The U.S. Department of Energy (DOE) takes about 25 times longer to approve permits for projects designated for non-free trade agreement (FTA) countries than it does for projects that are seeking to export liquefied natural gas to countries that hold a FTA. Permitting hold ups have left about 20.9 Bcf/d of non-FTA permit applications up in the air, the group said.

However, companies do not sanction projects without enough contracting.

API’s plan to move LNG projects, however, seeks to simplify and expedite the process. The group called for Congress to “amend the Natural Gas Act to streamline the review process for all LNG projects to a single approval by the U.S. Department of Energy.”

That said, Sommers added that the political rhetoric from the Biden administration is concerning, particularly “about the fact that they don’t believe we’re going to need oil and gas in 10 years…Why would someone build a new facility if the government is saying that we’re not going to need these facilities in the future?”

The API, however, was encouraged by the results of the Biden administration’s Inflation Reduction Act (IRA), noted Macchiarola. IRA incentives for leasing in the Gulf of Mexico (GOM) may posit good news for the industry. Sen. Joe Manchin (D-WV), he noted, “ensured that we’d have two lease sales this year,” with one in March, and another in the fall.

With the IRA, however, “We’re hopeful that the provision that ties wind lease sales to oil and gas lease sales, really pushes the administration to include more lease sales in the Gulf going beyond 2023,” Macchiarola said.

Other bonuses for the industry in the IRA includ the expansion of the Internal Revenue Service Section 45Q tax credit for carbon capture and sequestration. API noted, though, that more clarification is needed.

API reported that increased natural gas use has contributed to a 60% reduction in the U.S. electricity generation sector as a result of power plants switching from coal to gas, and more reductions could come from the carbon capture incentives included in the IRA, so long as the tax credits are implemented efficiently.

API also advocated for permitting reform to be at the top of the ticket for U.S. lawmakers to address in 2023. This would include revising the National Environmental Policy Act (NEPA) and ensuring environmental reviews are completed within two years.

NEPA’s impacts reach farther than oil and gas infrastructure, API noted. Wind farms, airports and traffic-related infrastructure are all impacted when environmental impact statements take “four-and-a-half years to complete, and 25% of completed impact statements” can take more than six years, according to API.

Sommers added that U.S. oil and gas production, while expected to continue to recover from the Covid-19 slump in 2023, may be slightly stymied by supply chain issues, workforce challenges and the exploration and production firms’ increased fiscal discipline amid “difficult economic conditions.”

In the past year, oil and gas producers have added “184 new rigs, so production is going up, and we’re producing about 12.1 million b/d.

“There are a couple of conditions in the marketplace right now that continue to hinder American oil and gas development…people are having trouble getting the workforce that they need to continue production,” Sommers said.

“They’re also facing supply chain issues, particularly when it comes to steel, which is a key component to drilling activity,” the CEO added.

One major factor impacting the industry “is the lack of access to capital,” Sommers said.

The CEO noted that the Federal Reserve Bank of Dallas is suggesting that “access to capital is a key component for why drilling hasn’t been where it needs to be.”

Energy analysts are projecting that in 2023, North American exploration and production companies may be more financially disciplined than in 2022 amid lower commodity prices and tightened free cash flow, according to Moody’s Investors Service.