The European Union has made significant progress to replace Russian natural gas, but an abrupt stop to pipeline flows could mean future U.S. LNG projects will be the key to rebalancing energy markets on the continent, industry groups highlighted in a new analysis. 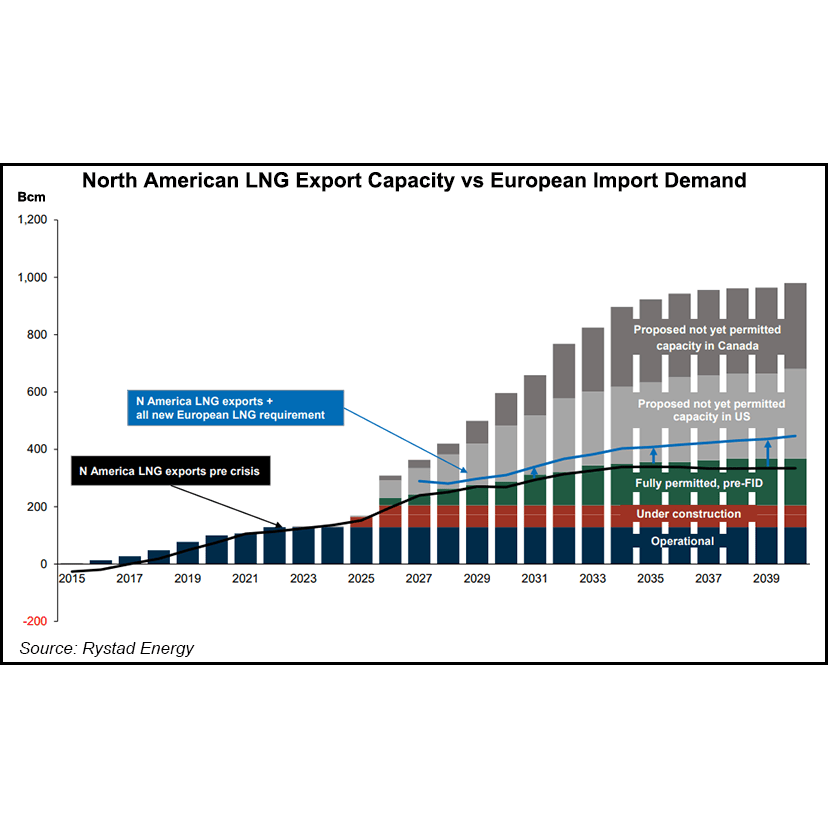 In a new report by Rystad Energy AS, conducted for the American Petroleum Institute (API) and International Association of Oil & Gas Producers (IOGP), analysts found Europe’s demand for U.S. liquefied natural gas could outpace previous estimates from earlier in the year. With the assumption that flows on the Nord Stream 1 system – which have been halted since the beginning of the month – will be absent from the European market for the foreseeable future, Rystad predicted Europe’s demand for LNG is projected to increase 150% from 2021-2040.

That could mean growth in European LNG demand will more than double the 50 Bcm/year outlined in the March joint agreement between the Biden administration and the EU, according to Rystad. Analysts also projected LNG would meet 50% of Europe’s natural gas demand through 2030, before growing to 75% of demand by 2040.

“To harness the power of U.S. LNG, we need smart and consistent policy support here at home, including strengthening domestic pipeline networks and energy export facilities, that will ensure both American consumers and global allies have access to the reliable energy that powers our modern world,” Meyer said.

In a recent report from Rice University’s Baker Institute, researchers found that developing LNG capacity in the United States expected to come online by the end of the decade outpaced projects planned in the rest of the world.

However, Rystad projects that the addition of capacity from U.S. terminals currently under construction and all proposed projects that are permitted still wouldn’t meet European LNG demand after Russian imports are expected to end in 2027.

Since Russia’s February invasion of Ukraine, the EU has seen a boost in production and exports from Norway. Members have also secured new supply partnerships with Israel and Egypt, and possible pipeline projects in the Eastern Mediterranean.

“Any further delay will extend the suffering our continent is currently experiencing and increases the risk of economic and societal damage,” Mouton said. “Industry is particularly hard hit.”

The European Commission is expected to deliver policy outlines later in the week for its natural gas plan, including possible energy pricing schemes to bring economic relief and encourage investments in renewables.