Overcoming the impacts of climate change remains “the global challenge of our time,” a top oil and gas industry spokesperson said Tuesday. 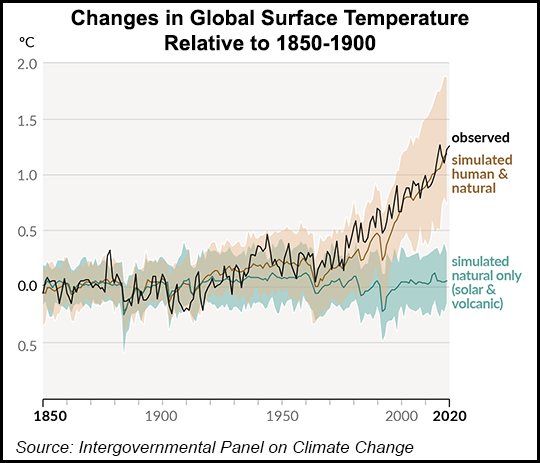 The Intergovernmental Panel on Climate Change (IPCC), created by the United Nations (UN), issued a dire assessment on the state of the planet on Monday. The compilation overseen by 234 scientific experts made clear that man-made GHG emissions pose an existential threat to Earth. Scientists drew from decades of meteorological observations, computer modeling and geological records.

“Unless we make immediate, rapid and large-scale reductions in greenhouse gas emissions, limiting warming to 1.5 degrees C will be beyond reach,” said IPCC Vice Chair Ko Barrett. She also is deputy assistant administrator for Research at the National Oceanic and Atmospheric Administration. “Each bit of warming will intensify the impacts we are likely to see.”

If Earth were to warm more than 2 degrees C above preindustrial levels, there could be massive consequences. Experts predicted that the Greenland ice sheet could collapse, with a six foot-plus increase in sea levels. Coral reefs could disappear.

Humanity’s influence on climate is “overwhelming,” the scientists said. It is no longer a scientific hypothesis but “established fact.”

The panel offered no policy recommendations. However, experts said fossil fuel consumption was a leading reason for the increase in GHG emissions.

The oil and gas industry is responding, Aronhalt said.

“Meeting the world’s growing energy needs while addressing the risks of climate change is the global challenge of our time, one that governments and industries must tackle together,” she said.

“As populations grow and economies expand, the world will continue to need solutions that ensure access to the affordable, reliable energy modern life depends on and at the same time accelerate emissions reductions and improve environmental performance.”

Achieving the lower-carbon future, Aronhalt said, “will require new approaches, new policies and continuous innovation, and our industry will continue to lead the way by further mitigating emissions from operations, advancing cleaner fuels, investing in groundbreaking technologies and advocating for market-based solutions like carbon pricing.”

Reducing methane emissions and addressing climate change risks “are top priorities for our industry,” Aronhalt said. U.S. methane emission rates “have declined nearly 70% in key producing regions over the past decade. We have more work to do.”

The energy industry “will continue to lead the way by implementing new technologies, enhancing monitoring and taking action through initiatives like the Environmental Partnership,” which was launched in 2017.

API also stands ready to work with policymakers “to build on the progress the industry has made in reducing emissions by advancing innovation and the direct regulation of methane for new and existing sources across the supply chain.”

The Texas Independent Producers and Royalty Owners Association (TIPRO) also weighed in on the IPCC report. The group told NGI that the energy industry has led efforts to reduce GHG emissions by reducing flaring. Initiatives also are ongoing, including for carbon capture, storage and utilization.

“The U.S. oil and natural gas industry continues to lead in efforts to reduce energy emissions through innovation, collaboration and more than $300 billion invested in greenhouse mitigating technologies over the past two decades throughout the value chain,” TIPRO President Ed Longanecker said. “In the last 20 years, Texas-led innovation has allowed producers to meet record energy demand while reducing the greenhouse gas intensity of oil and gas.”

Liquefied natural gas produced in the state also “is helping to lower emissions at home and abroad,” he noted. In addition, the Railroad Commission of Texas recently reported a “massive drop in flaring — over 70% — between 2019 and 2021…Additionally, methane intensity in the Permian Basin is down more than 70% in the last eight years.

“Nationally, methane emissions from U.S. energy production have declined 17% between 1990-2019,” while oil output is 66% higher and natural gas production is up 96%, Longanecker said.

“The world will continue to need this valuable commodity for decades to come, and the U.S. oil and gas industry is prepared to meet that demand.”

While the IPCC report offered no policy recommendations, it evaluated what it would take to limit the consequences of a warming planet.

In the best case scenario, the world would phase out fossil fuels, embrace alternative energy resources and reimagine how people work, eat and travel.

“The impacts of the climate crisis, from extreme heat to wildfires to intense rainfall and flooding, will only continue to intensify unless we choose another course for ourselves and generations to come,” said White House climate envoy John Kerry. “What the world requires now is real action.”

Hurricane Harvey, which came ashore in South Texas in August 2017 as a Category 4 storm, was the strongest to strike the state since Carla in 1961. For days on end high winds and catastrophic rainfall created havoc all along the Gulf Coast, displacing oil and natural gas systems far inland.

In coastal areas, the experts predicted sea levels would rise “throughout the 21st century, contributing to more frequent and severe coastal flooding in low-lying areas and coastal erosion. Extreme sea level events that previously occurred once in 100 years could happen every year by the end of this century.”

In cities, climate change could be amplified, as urban areas are often warmer than their surroundings.

UN Secretary General António Guterres said the report was “a Code Red for humanity.” The world, he said, must find ways to limit GHG warming as much as possible. “We owe this to the entire human family. There is no time for delay and no room for excuses.”

It’s not only a change in temperature that concerns the scientific experts. Climate change “is bringing multiple different changes in different regions, which will all increase with further warming,” the researchers said. “These include changes to wetness and dryness, to winds, snow and ice, coastal areas and oceans.”

The water cycle is changing, leading to “more intense rainfall and associated flooding, as well as more intense drought in many regions.” Rainfall patterns have been altered, with precipitation in high latitudes likely to increase, while the subtropics would have less rain.

Meanwhile, Senate Democrats also on Monday unveiled a $3.5 trillion budget resolution that is centered around ways to tackle GHG emissions. The resolution provides a roadmap of sorts for Senate and House committees to include climate change priorities in the future reconciliation package.

The Senate Energy and Natural Resources Committee, led by Democrat Joe Manchin of West Virginia, would be tasked with writing a standard centered on “clean” electricity.