The American Petroleum Institute (API) on Thursday unveiled a five-point policy framework for tackling climate change while ensuring U.S. energy needs are met, including an economy-wide price on carbon emissions. 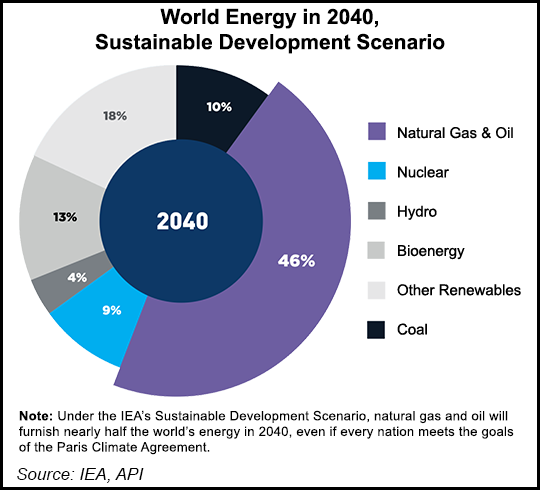 The endorsement marked a seismic shift for the oil and gas group, which has lobbied against past attempts to impose carbon pricing in the United States.

“Confronting the challenge of climate change and building a lower-carbon future will require a combination of government policies, industry initiatives and continuous innovation,” said CEO Mike Sommers. “America has made significant progress in reducing emissions to generational lows, but there’s more work to do, and there’s nobody better equipped to drive further progress than the people who solve some of the world’s toughest energy problems every day.

In the new climate active framework, API said, “Rather than a patchwork of federal and state regulations and mandates that could ineffectively address the climate challenge, an economy-wide government carbon price policy is the most impactful and transparent way to achieve meaningful progress. We recognize there are different ways for policymakers to consider carbon pricing – from a cap-and-trade system to a carbon tax – but there are some general parameters to begin the discussion.”

Namely, the policy should be economywide, transparent, nonduplicative and maintain U.S. competitiveness, API said. The group added that the policy should maintain U.S. competitiveness, allow integration with global carbon markets, and focus on net greenhouse gas (GHG) emissions “such that ongoing voluntary actions are recognized and the trading and use of applicable credits and offsets is allowed.”

API said it plans to “engage policymakers so that the design of a potential approach would price carbon at the outset for all relevant GHG emissions across the economy, from all relevant sectors and all emitters, accounting accurately for the benefits, costs and amounts of GHG emissions.

“Policies should support significant investments in innovation to develop technologies that lower the cost of GHG emissions abatement across the economy,” it said. “The carbon pricing system should be designed so that consumers have transparent incentives, based on actual GHG emissions if possible, to reduce GHG emissions efficiently. With respect to transportation fuels, a government policy-imposed carbon price should be disclosed at the point of retail sale.”

To ensure certainty for the economy and the integrity of the policy, “the price on carbon or emissions cap should be adjusted periodically through a defined, rational and transparent process to meet GHG emissions targets,” API said.

To achieve that goal, API is advocating “for the full appropriations of funds for research, development and deployment (RD&D) programs authorized in the bipartisan Energy Act of 2020.”

During a call with reporters on Thursday, Sommers said API supports expanding tax credits for sequestered carbon under Section 45Q of the U.S. tax code. API also is backing policies “that advance the technology neutral development of low-carbon hydrogen and the use of hydrogen in carbon-reduction efforts.”

The group said hydrogen is “increasingly recognized as a valuable pathway for meeting ambitious climate goals – particularly in reducing emissions from hard to abate sectors…Today, most hydrogen is produced with natural gas, which, if paired with CCUS, offers a promising and scalable low-carbon fuel source.”

‘Opportunity Of Our Time’

Citing that methane accounts for about 10% of total U.S. greenhouse gas (GHG) emissions on a carbon dioxide (CO2)-equivalent basis, API said it seeks to advance direct regulation of methane from new and existing sources.

“As a result of technology and efficiency measures, emissions relative to production in the largest producing basins were down nearly 70% between 2011 and 2018 and continue to trend downward,” API noted.

More work is needed though, as evidenced by new research led by the Environmental Defense Fund showing that methane emissions in the Permian Basin have surged back to pre-pandemic levels.

“This program will identify an achievable target that will result in meaningful GHG emissions reductions,” API said. It explained that participating companies would report their performance annually through a third-party organization.

Sommers told reporters that while the challenge of solving climate change while ensuring energy needs are met is “immense,” but that it also is “the opportunity of our time.”

API plans to lead the fight by providing platforms to reduce emissions through industry-led solutions, and to pursue policies that “address the risks of climate change while meeting the global need for affordable, reliable and sustainable energy.”