The American Public Gas Association (APGA) has asked the Commodity Futures Trading Commission (CFTC) to look into a 10% price spike in the February New York Mercantile Exchange (Nymex) Henry Hub contract during the final hours of trading on the contract Jan. 29. 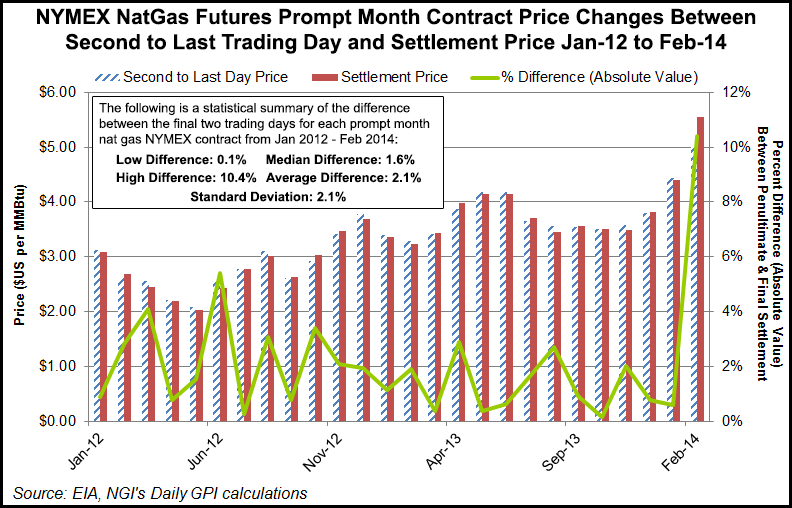 The 52.4-cent jump for natural gas for February delivery that drove the Nymex price to $5.557/MMBtu — the highest closing price at the time since Jan. 25, 2010 — was the largest one-day percentage gain since June 14, 2012, APGA said in a letter sent to CFTC Acting Chair Mark Wetjen.

“APGA believes it is important that the CFTC review the trading activities to ensure that natural market forces, and not excessive speculation or other market abuses, were the causes for the 10% price spike in the February 2014 Nymex Henry Hub contract that occurred in the final hours of trading. While the weather may have been particularly cold at that time, APGA questions whether cold weather can fully account for the 10% price spike,” the organization said in its letter.

APGA, which represents publicly owned local distribution companies, said most of its members purchase gas under contracts priced off of a price index.

“Given the extent that price indices now track Nymex, the Nymex contract plays an important role in how much public natural gas systems — and in turn their customers — pay for natural gas,” APGA said.

“As hedgers using both the exchange and the OTC energy markets, APGA’s members value the role of speculators in providing needed liquidity and depth to the markets. However, the dramatic collapse of Amaranth Advisors LLC [see Daily GPI, Dec. 22, 2011] has demonstrated the adverse impact that speculative trading interests can have on natural gas supply contracts.

“APGA has no evidence of manipulation and we understand that the price volatility that occurred may have been the result of natural market forces as opposed to market manipulation. However, this incident does drive home the pervasive pricing impact of Nymex and the need to ensure that the market is liquid and operating correctly.”

From a purely statistical standpoint, the last day rise in the February 2014 futures contract does seem out of character from recent data. Between January 2012 and February 2014, the final day contract went off the board an average of 2.1% higher or lower than its previous day close, and that figure is skewed higher from the 10.4% difference in the February 2014 settle to its prior day price. The median (most frequently occurring) price difference was 1.6%.

Last week FERC Acting Chairman Cheryl LaFleur said the Commission plans to hold a technical conference April 1 to evaluate the U.S. electric grid’s performance and review interaction between the natural gas and electricity markets during what has been an unusually harsh winter (see Daily GPI, Feb. 20).

Last month, following requests from the New York ISO (NYISO) grid operator and mid-Atlantic grid operator PJM Interconnection to waive the $1,000/MWh cap on cost-based power generation bids, LaFleur said the Federal Energy Regulatory Commission (FERC) was keeping its eyes on infrastructure and on making sure that markets were properly working — but said natural gas and electricity price spikes brought on by record cold were a sign that the markets were working (see Daily GPI, Jan. 28).

Multiple polar vortices this winter have driven the number of recorded heating degree days to unusual highs, according to National Oceanic and Atmospheric Administration data (see Daily GPI, Feb. 6). And the 2013-2014 chill is far from over. The Northeast, North Central and lower Mississippi Valley are forecast to see unusually cold temperatures continuing through most of April, according to forecasters at Weather Services International (WSI) (see Daily GPI, Feb. 4).

Those extended polar vortices have translated into record natural gas storage withdrawals this winter, reintroducing price volatility to a market that has been calmed in recent years by mild winters and plentiful shale gas. Trading on Nymex Monday was no different. Two days before the contract’s Wednesday expiration, March natural gas futures recorded the largest single-day price decline in five and a half years after plummeting 69 cents to close the regular session at $5.445 (see related story). Analysts and traders attributed the drop to profit-taking before the contract’s expiration, along with reworked weather models showing near-term milder temperatures.