Driven by record production from the Permian Basin, including a near-70% increase in natural gas output from No. 1 prospect Alpine High, Apache Corp. is boosting its capital spending this year by $400 million to $3.4 billion. 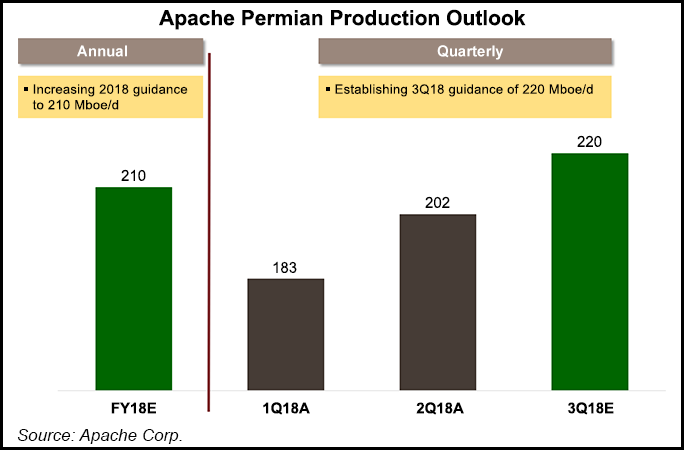 In the gassy Alpine High in the Delaware sub-basin of West Texas, average net production rose 23% sequentially to 32,000 boe/d. By the end of July, however, Alpine High output was averaging 54,000 boe/d, up 70% year/year.

Based on the results from the strategic testing programs, the Houston-based super independent is increasing capital expenditures (capex) to boost volumes and expand infrastructure in the twin Midland and Delaware sub-basins.

“In the Permian Basin, our drilling and completion operations are very efficient, and our wells are outperforming,” said CEO John J. Christmann IV. “Our primary infrastructure is in place at Alpine High, and we are in the very early stages of a significant, long-term production ramp up. Furthermore, we have progressed an Alpine High midstream transaction to advanced stages and anticipate closing before year-end.”

Management has long planned to either monetize Alpine High midstream infrastructure through an outright sale or by bringing aboard a partner.

Between April and June, capital expenditures (capex) in the Alpine High development alone totaled about $833 million, including $116 million for midstream infrastructure. Through the first six months, investments were around $1.7 billion.

Management now “anticipates maintaining this pace of investment in the second half of the year, bringing the full-year spending outlook to approximately $3.4 billion, compared to prior guidance of $3 billion,” Christmann said. “This spend level anticipates a full year of Alpine High midstream investment, which may change with a potential transaction.”

Adding incremental capex would “align and optimize drilling and completion activity” in the Midland and “fund investment in longer laterals, larger completions and facility expansions at Alpine High…These activity modifications incorporate learnings from the company’s recent strategic tests and are expected to result in increased productivity and improved returns.”

At current strip prices, the additional capex “twill be fully funded through cash flow from operations and will provide significant incremental production in 2019 and beyond.”

During the conference call Thursday, CFO Steve Riney provided some context on how Apache is dealing with Permian takeaway and realization issues.

“We are clearly in a period of tightening takeaway capacity and therefore widening differentials,” he said. “Ultimately, more takeaway capacity is the only solution. The entire industry is working on that situation and Apache is certainly playing our part.”

The company in June joined in the proposed Permian Highway Pipeline Project (PHP) a partnership led by a Kinder Morgan Inc. (KMI) subsidiary with a Blackstone Energy Partners unit. The 42-inch diameter system if built would run about 430 miles from the Permian to markets along the Texas coast and potentially into Mexico.

“Good progress is being made and relief will start showing up next year,” Riney said. “For the time being, we focus on the current situation day by day in a very pragmatic way. We take steps to make sure our product flows to market and gets the best possible realized price.”

Apache now has about half of its Permian oil for 2018 and 2019 on term sales contracts backed by firm transport agreements, said the CFO. About 30% of the oil output is West Texas sour, he said.

“We continue to see very little flow risk with these volumes as they are sold to regional refineries specifically equipped to run sour crude. We manage the remaining 20% of oil production very closely and do not currently believe it will result in any production shut-ins.”

Regarding differentials, Apache added some Midland oil basis hedges in the second quarter and is currently exposed to “just under 6% of our 2018 Permian oil volumes.” Absent any further hedging in 2019, the hedges should increase by about 10%.

“With respect to Permian gas, our risks related to takeaway and basis differentials did not materially change in the second quarter,” Riney said. “Nearly 90% of 2018 volumes and over 80% of 2019 volumes are on term contracts or have access to firm transport to other markets.

“Sixty-five percent of our 2018 gas Permian volumes are subject to movements in Oaxaca or our El Paso Permian differentials. In 2019 this falls to just under 6% as new transport capacity becomes accessible.”

The current constraints are “transitory,” Riney said. “We have heard the discussions, and in some cases, seen decisions to reduce Permian rig count. We see this as a logical choice for those at risk of materially curtailed production. We do not anticipate that situation for Apache.

“To the contrary, we believe the long-term value created by advancing progress at Alpine High and other Apache assets in the Permian Basin more than offsets the potential impact of short-lived weaker basis differentials.”

Absent a “significant change in the basis differential outlook, we will not materially revise our planned capital investment, and we will most likely stay the course.”

Strong execution and well performance also has prompted management to raise 2018 U.S. production guidance for the second time since May. The updated guidance of 260,000 boe/d surpasses a previous forecast of 250,000-258,000. At Alpine High, full-year guidance is 45,000 boe/d, the midpoint of the previous range.

“Apache’s operational and strategic delivery have been exceptional through the first half of 2018,” said Christmann. “We are proactively managing our costs, operating at an activity level that maximizes capital efficiency, and we have established considerable momentum that is now showing up in our results.”

While natural gas has been the primary output from Alpine High, Apache has been working to increase oil output across the Permian. During the quarter, oil production from the Midland and Delaware sub-basins combined increased by 20,000 boe/d year/year and 6,000 boe/d sequentially. Completion cycle times also have declined in the twin sub-basins, while Alpine High well costs/lateral foot have fallen by 25% over 2017 averages.

In addition, Apache has stepped out beyond the Alpine High to begin developing the Dixieland prospect in Reeves County, TX, as well as the Slope play in southeastern New Mexico. Forty-one wells ramped up across the Delaware between April and June.

Activity in the Midland sub-basin is focused on developing pads in the Wolfcamp and Spraberry formations, where 22 wells were brought online in 2Q2018. Apache has been upgrading its completion designs, resulting in lower cycle times and cost reductions, which have fallen by almost $400,000 per completion in the sub-basin.

On average, Apache ran 17 rigs across its U.S. operations in the quarter, and it drilled and completed 70 gross-operated wells.

“Internationally, we are generating significant free cash flow bolstered by Brent oil pricing,” said the CEO. “Our strategy and investment decisions in these regions are designed to deliver long-term oil growth in Egypt and to sustain production volumes in the North Sea…

“Given our strong well performance trends, capital efficiency improvements, and the planned increase in 2018 investment, we anticipate upside bias to our 2019 and 2020 production guidance, which we will revisit later this year.”