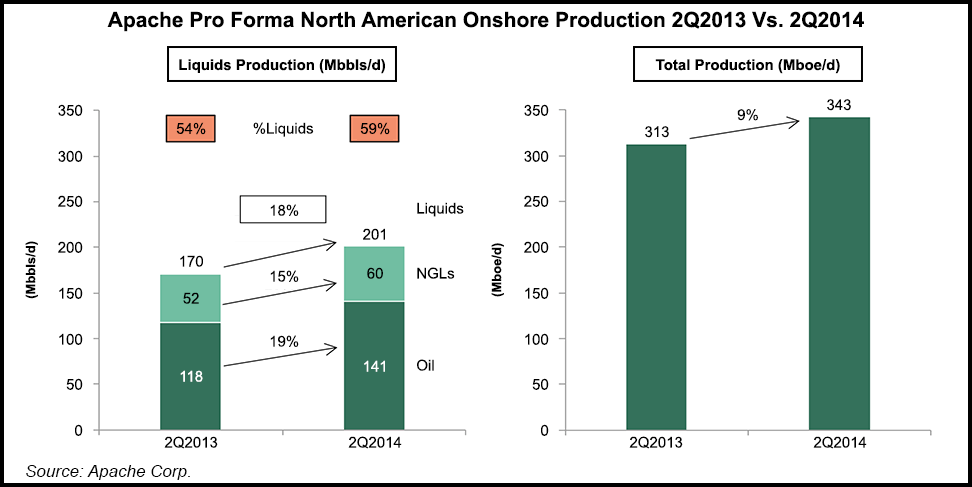 “First, let me state at the outset, that Apache’s future is centered on our tremendous North American resource base,” Farris told analysts. Many of the rumors circulating about what Apache may do to lift the value of the company already are in the works, he said. “And let me be clear, Apache intends to completely exit Wheatstone and Kitimat LNG projects.”

The proposed Kitimat export facility for British Columbia’s (BC) west coast is being developed with Chevron Corp. Interests in the gassy Liard and Horn River formations in BC, considered part of the Kitimat portfolio, also are being marketed. In addition, a 13% stake in the Chevron-led Wheatstone LNG project in Australia has been put up for sale (see Daily GPI, May 5).

Asked what impact Apache’s exit might have on Kitimat, Farris said “a complete exit by Apache should have no impact on the value of Kitimat one way or another. Whether we’re in it or not, it’s a world-class reserve, and Chevron and Apache are well ahead in that arena. We’ve always been in a position that we felt like we could not be in LNG projects” for the long haul.”

Chevron is scheduled to deliver its quarterly results on Friday.

Apache doesn’t plan to exit Canada completely. Assets in the Duvernay and Montney basins, which hold big liquids-rich opportunities, are to be retained, said Farris.

Ways to monetize the international businesses have been on the table for months, but it may not be an outright sale, he said. One option is to spin off the portfolio, allowing the operator to keep some of the cash flow, while another is an outright sale. The overseas portfolio includes assets in Argentina and Egypt.

“Certainly, the way we are looking at it, we would just spin out or set up a company that was above any of relationships that Apache had at a joint venture level,” he said. “We’ve been exploring multiple opportunities, including separation or monetizing…through the capital markets.”

“The cornerstone of the North American onshore success is the outstanding performance in the Permian Basin…We have reached our performance goals ahead of plan, and recently reached a significant milestone with liquids production of 150,000 b/d net…We’ve come a long way since we launched the region just four years ago…Production has been up 200% since that time, 17 out of the last 18 quarters and the last 11 quarters consecutively.”

Cash flow from the Texas-New Mexico basin is strong enough “to fund our capital program through the year,” with 23% liquids growth and 20% boe growth now expected year/year.

Apache reported a 50% decline in quarterly earnings from a year ago, partly on a long list of asset sales, with revenues sliding 18% to $3.48 billion. Over the past year the operator has sold producing assets in the Gulf of Mexico, Canada, Argentina and in Egypt.