Apache Corp. has mapped out thousands more Alpine High drilling locations in West Texas since unveiling the Permian Basin play a year ago, and while wet gas remains the No. 1 target, dry natural gas and oil targets continue to emerge. 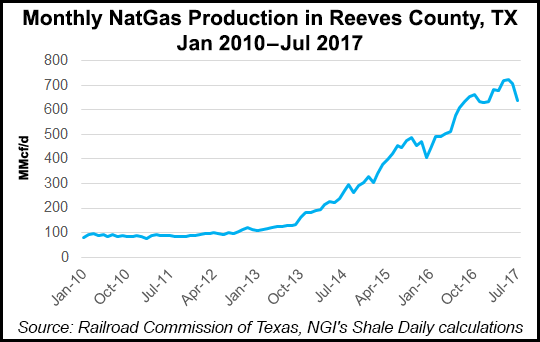 CEO John Christmann, joined by CFO Steve Riney and Executive Vice President Tim Sullivan, operations chief, conducted a deep dive into corporate operations late Monday, outlining progress in the United States and abroad. As expected, most of the granular discussion centered around the Alpine High, a discovery that debuted in September 2016. Within two months, it had become the super independent’s top priority.

Those priorities have not changed, as the play appears to be better than even Apache first expected with three distinct hydrocarbon pay zones — wet gas, dry gas and oil. The dry gas economics now appear to favorably compete with the Marcellus Shale, while the wet gas economics size up to Oklahoma’s best stacked reservoirs. And the oil prospects? Those are just beginning to be understood.

“We have made remarkable progress in a little over a year since we announced Alpine High,” Christmann said. “Just six months after breaking ground on our gathering, compression and processing infrastructure in November, we achieved first sales in early May,” nearly two months ahead of schedule. “We subsequently exceeded both our June production target of 50 MMcf/d and just recently, our September target of 100 MMcf/d net to Apache.”

For the wet gas play, Apache estimates it has more than 3,500 economic locations. As it transitions into development mode, based on 4,400 foot laterals, wells costs are estimated at $4-6 million, with net present values (NPV) of $5-8 million for a “typical” well, and an NPV of up to $19 million for a “high-end well.”

In the dry gas play, more than 1,000 drilling locations already have been identified, with wells costing $5-6 million and generating average NPVs of $3-7 million per well.

The emerging oil play is taking shape in the “parasequences,” with five wells drilled to date. Much is still to be learned about the oil, but Apache is “confident we now have at least 500 locations, and we are equally confident there are more to come,” said the CEO.

When it unveiled its discovery last year, Apache had assembled a 307,000 net acre position in Reeves County, within the Delaware sub-basin. While other explorers were pursuing acreage packages in the Permian for as much as $50,000/acre, Apache snapped up the West Texas acreage for $1,300/acre on average.

The formation contains a vertical hydrocarbon column of 4,000-5,000-plus feet with five discrete hydrocarbon-bearing formations, the Woodford, Barnett, Penn, Wolfcamp and Bone Spring, each with multiple target zones. Apache had only tested the Woodford and Barnett when it announced its initial findings, estimating hydrocarbons in place of 75 Tcf of rich natural gas and 3 billion bbl of oil, along with 2,000-3,000 future drilling locations.

Since then, more than 70 wells have been drilled into the play, including concept tests to verify Apache’s understanding. It has to date identified 10 “proven” landing zones, with three in the Woodford, two in the Barnett and one in the Penn. In the parasequences, three identified landing zones have been found in the Wolfcamp and in the Third Bone Spring.

Today more than 5,000 drilling locations have been identified, with 3,500-plus in the Barnett and Woodford alone.

“Our wet gas location count will likely also increase in the Barnett and Woodford with the addition of more landing zones and tighter spacing,” the CEO said. “In the dry gas play, the 1,000-plus locations are also located in the Woodford and Barnett,” in the Northern Flank of the play, where most of the drilling today is underway.

“With all of the ongoing learnings, we have leased new acreage in areas identified as higher quality,” Christmann said. “We have also allowed some acreage to expire.”

In the dry gas window, which is at depths of about 13,000 feet, the Barnett and Woodford wells have been producing average 30-day initial production rates of 14.6 MMcf/d from 4,650-foot treated laterals.

“This is already a very predictable and repeatable play,” Sullivan said.

Apache compared Alpine High’s dry gas to the Marcellus using wells with first production dates starting on Jan. 1, 2014 to ensure each were using the best-in-class technology. The average type curves from the comparable dry gas Marcellus areas were compared to the actual performance from the Alpine High dry gas wells, Sullivan said.

Still, “while we have seen some impressive results from our drilling program this past year, we have yet to drill our best well at Alpine High. Across all areas of Alpine High we will be conducting spacing and pattern tests, testing new landing zones and optimizing lateral length and completion designs.”

For now, however, infrastructure buildout is dictated by the potential of the wet gas, said Riney.

“The backbone of Alpine High’s infrastructure system is a gas trunkline being built through the play to flow processed gas from the field to the market,” he said. “We will lay approximately 70 miles of 30-inch diameter trunkline to move gas to sales connections in the north and in the south. Although it is a single line, it will flow gas in both directions, so it is actually two export routes.

“Assuming compression of 1,150 psi, these two export routes would have the combined capacity to flow 2-2.25 Bcf/d of gas to market.”

The trunkline is being constructed in five segments, with two already in operation. The first sales connection was made in the north earlier this year, and gas has been flowing since early May.

Processing capacity mostly has been built in 50 MMcf/d modular increments, and the process already is underway to double capacity at some locations.

“In terms of total gas processing capacity, we currently have three facilities operating with a gross inlet capacity of 200 MMcf/d,” Riney said. Two installations were delayed slightly because of supply chain disruptions caused by Hurricane Harvey.

“By year-end, we should have five processing facilities operating with a gross inlet capacity of 330 MMcf/d. Cryogenic processing is definitely a possibility in lieu of continuing to expand refrigeration capacity and is under active consideration at this time.”

All of the Alpine High gas today is moving through the northern sales connection into the Comanche Trail pipeline, which went into service last spring.

“All of this gas is going to Mexico and is being priced at a slight premium to Waha daily basis,” Riney said. “As we have indicated in the past, our desire is to contract a portfolio of transport and sales agreements to access multiple delivery locations and multiple pricing bases.”

Multiple projects, he said, are competing to move gas to the Texas Gulf Coast, “where demand is strong and growing.”

Apache also is having conversations with “multiple parties” about its gas options. “Eventually, we anticipate the need for a third gas export route from Alpine High,” Riney said. “Current plans are to build that line directly to the Waha area in the 2020-2021 timeframe.”

By the end of next year, Apache expects to have invested more than $1 billion overall for Alpine High infrastructure, with more to come.

“We want to have complete control over access to processing and transport capacity, the pace and location of buildout, and the specification of facilities being constructed,” Riney said. However, a day will come “when full ownership and control are no longer required,” and at that time, the system should “make for an extremely attractive midstream enterprise supported by the anticipated growth and quality of the Alpine High upstream.”

Apache has a “full range” of monetization options under discussion, from retaining full ownership for the long-term to a complete exit. “However, we anticipate having some form of continued ownership in this enterprise for a long time. The key is that we have a lot of flexibility both in terms of monetization structure and the timing of when that might occur.”

Meanwhile, the oil and liquids are being trucked from central tank batteries in the field.

“We are selling all of our oil in the field at Midland daily index pricing, less trucking costs of just under $3/bbl,” Riney said. “In the future, as we move these volumes to pipe transport, we anticipate our pricing basis will remain the same, but we will replace the trucking costs with pipeline transport at a significantly lower cost.”

Trucked NGLs are being sold at the Mont Belvieu hub near Houston, with realized pricing slightly more than 60% West Texas Intermediate before paying trucking costs, Riney said. “As we move these volumes to pipeline transport, we anticipate significantly lower costs.”

By May 2018, the one-year anniversary of first production from Alpine High, the play will have “completely replaced the approximate 50,000 boe/d of production that we divested when we exited Canada this year,” Christmann said. “Importantly, the margins on our Alpine High production will be significantly higher than our margins in Canada.”

The market is “eager” for Alpine High information “and we are just as eager to provide it,” the CEO said. “In some cases, our communication has been limited as the proliferation of new competitors creates certain disclosure considerations that were not applicable a year ago.

“What has not changed is our focus on maximizing value from Alpine High for our shareholders.”

However, Apache is taking a “scientific approach, building on the data we collect, and prudently transitioning to development as efficiently and safely as we can.”