Apache Corp. has eliminated all of its Permian-centered U.S. drilling and completions work and reduced activity overseas to ensure strong liquidity and wait out the dire impacts to demand from Covid-19. 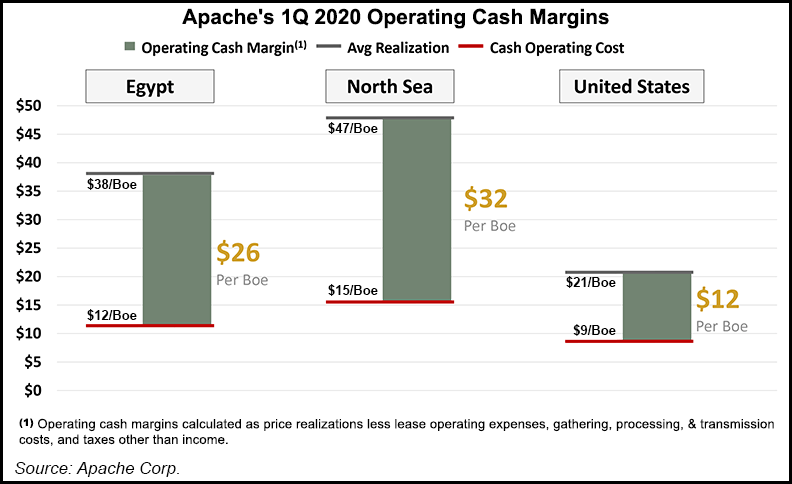 The Houston-based super independent, like its peers, saw the year begin well, but by March, the die was cast as the pandemic began to rout natural gas and oil operations worldwide.

In addition, it launched a “thorough economic and operational evaluation of all the producing wells across the company,” CEO John J. Christmann IV said. The analysis was done “to inform the methodical and targeted approach we are taking to production curtailments and shut-ins in this price environment.”

In early March, Apache shut down all of its domestic drilling and completions activity. It also reduced operations in Egypt and the North Sea. With less clarity on the Lower 48, Apache upended its capital plans, shifting most of its spend from the United States, with about 60% directed overseas versus 45% in previous guidance.

“While the 2020 outlook for the global economy and the oil and gas industry, specifically, is uncertain, we have made great strides in this environment to reduce our cost structure, protect our balance sheet, and manage our operations to preserve cash flow,” Christmann said. “When market conditions improve, I am confident we will successfully leverage Apache’s diversified portfolio to differentiate our long term value proposition for shareholders.”

Production between January and March came in at 468,000 boe/d, with 21 rigs in operation and 44 wells completed worldwide.

On average, seven rigs were working in the United States until early March, all in the Permian, where 24 wells were completed with output of 283,000 boe/d.

However, the Permian rig count now is set to zero for the near term, with one lone rig finishing one well in the Delaware. Apache expects to end the year with about 70 drilled and uncompleted wells combined in the Midland and Delaware formations, including 15 in Alpine High.

As part of its Covid-19 response, Apache closed several offices and implemented work-from-home measures. It also set up operational protocols that led to “minimal business interruption.”

As it begins to reopen some offices, Apache has set up temperature screenings to test employees for potential exposure to the coronavirus. It also has expanded an assessment of all contractor companies/vendors coming onsite to locations, as well as increasing cleaning measures in the field and in office locations.

A phased re-entry plan is in place to eventually reopen the closed offices, following guidance of local governments.