Apache Corp. said it has secured 500 MMcf/d of transport capacity via the Gulf Coast Express (GCX) pipeline, a $1.7 billion proposed project designed to carry 1.92 Bcf/d from the Permian Basin to the Texas Gulf Coast. 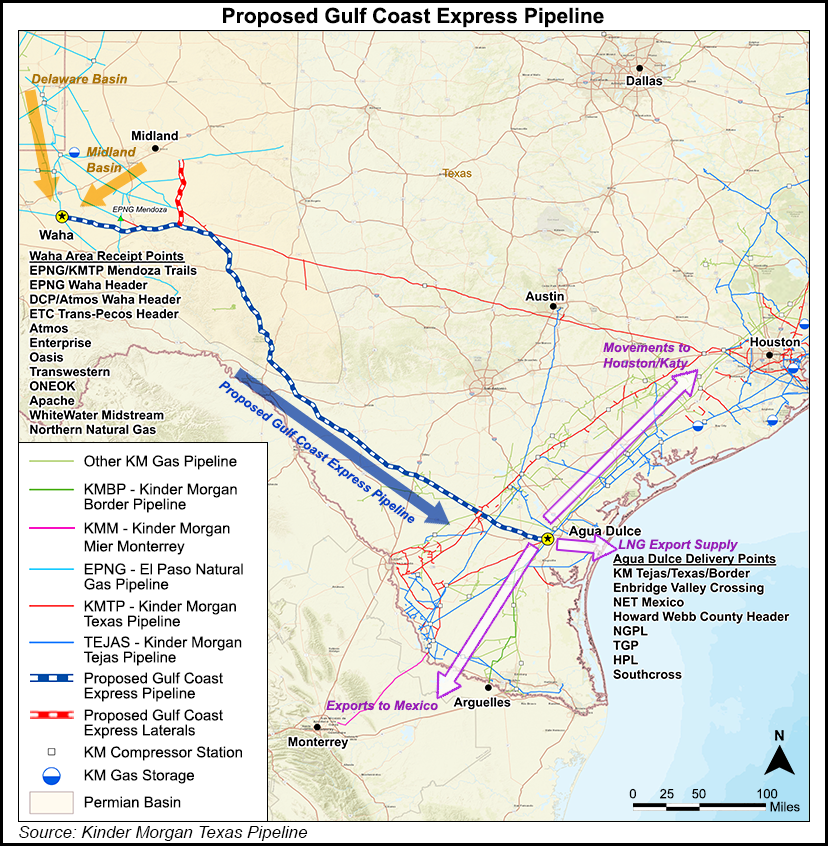 On Thursday, the Houston-based super independent said GCX will “provide Apache access to domestic industrial and utility users, as well as incremental demand for liquefied natural gas exports and Mexico markets.” Through its new role as a significant shipper on GCX, Apache has also secured an option to purchase up to a 15% stake in the pipeline.

Last October, Targa Resources Corp. joined the project as its third partner and holds a 25% stake in GCX. Kinder Morgan Inc. (KMI) plans to build, operate and own a 50% interest in the pipeline, while DCP Midstream owns the remaining 25% stake.

“The takeaway capacity we have secured will allow greater flexibility and market optionality for our Permian production, including increasing volumes from our recent discovery at Alpine High,” said Brian Freed, a senior vice president at Apache. “Our participation in the GCX project ensures we will be able to deliver gas to the Gulf Coast where we can access growing market demand and Gulf Coast basis pricing.”

Freed added that Apache’s participation in GCX “supplements previously contracted shipping capacity from the region and complements the significant field infrastructure we have built to accelerate the development program at Alpine High.”

Apache’s Alpine High prospect, located in the Permian Basin’s Delaware sub-basin in West Texas, has been providing thousands of potential drilling locations — including wet gas, dry gas and oil pay zones — since its debut in September 2016 and promotion as the company’s top prospect two months later.

GCX is expected to be in service in October 2019, pending the receipt of necessary regulatory approvals.