Egypt’s importance to the portfolio of APA Corp. is advancing after the Houston independent and its Chinese partner secured updated production sharing contracts (PSC). 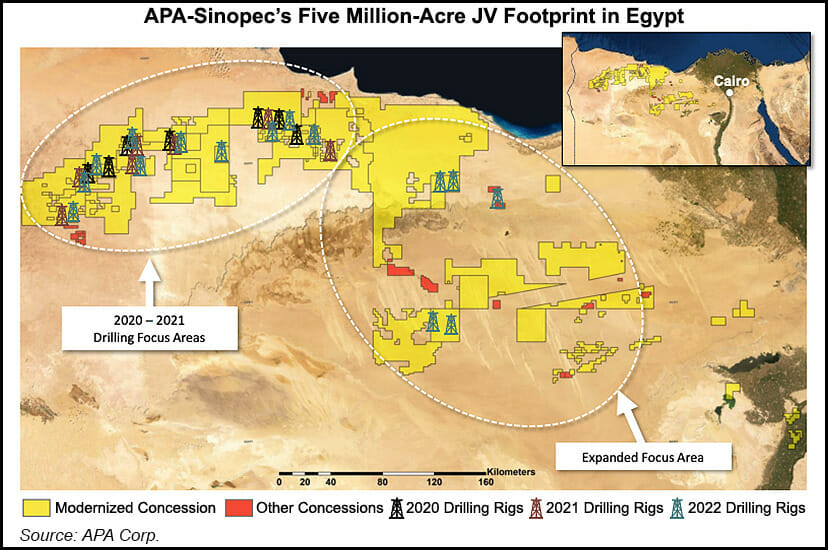 “This agreement is a win-win for Egypt and the APA-Sinopec JV,” said APA CEO John J. Christmann IV. “The modernized PSC incentivizes increased investment and production growth and places Egypt at the top of many attractive investment opportunities in APA’s global portfolio. It also reinforces Egypt’s commitment to responsible economic development and public-private partnerships.”

In anticipation of the PSC changes, the JV more than doubled its Egypt rig count this year to 11, and it plans to boost the count to 15 in 2022. The JV in 2022 expects to increase gross capital investment by $235 million in Egypt. Oil production is forecast to climb in 2022 by 13-15% year/year.

“Since the beginning of 2021, we have increased drilling activity from five to 11 rigs in Egypt, and under the revised PSC, we look forward to further increasing the rig count and generating significant year/year growth in oil production,” Christmann said.

Plans are underway to implement several “impactful” environmental, social and governance initiatives “aligned with our focus areas of air, water, communities and people.”

Under the consolidated concession, all of the JV’s production would obtain a 40% cost recovery limit and a fixed profit share rate of 30%. The JV would be entitled to recover nearly $900 million of backlogged costs over a five-year period that began April 1, 2021, through the effective date of the new agreement.

The JV partners also agreed to pay a signature bonus payment of $100 million to the Egyptian General Petroleum Corp.

Apache, which operates the JV, launched its partnership with Sinopec in 2013. At the time, Apache’s net production from the Egypt operations averaged around 100,000 b/d of oil and 354 MMcf/d of natural gas.