Jana Partners LLC now holds an estimated $1 billion-plus stake in Apache Corp., leverage that the activist hedge fund wants to use to pressure the super independent to sell off all of its international holdings, including in Canada, to focus exclusively on U.S. onshore opportunities. 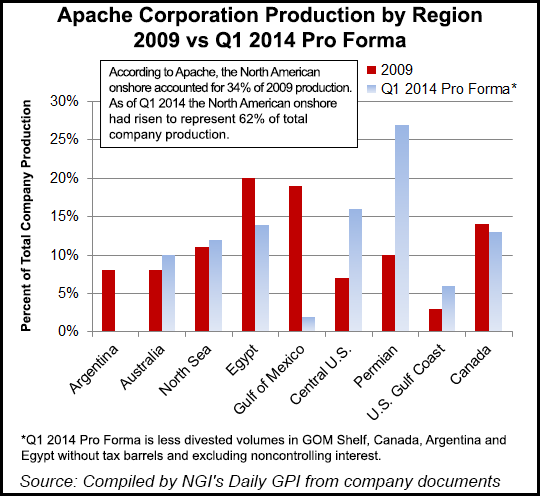 Jana, founded and managed by Barry Rosenstein, sent a letter to Apache (APA) management on Monday calling for the changes. Jana executives claim that Apache, with holdings around the world, is underperforming U.S. pure-play onshore operators.

“Investors are unimpressed by APA’s global diversification and have voted with their feet,” the letter said. To free up more cash flow, Jana has urged the Houston operator to exit, among other things, two liquefied natural gas (LNG) export projects: Wheatstone in Australia, and British Columbia’s proposed Kitimat LNG.

Apache already is “actively” working to sell the Kitimat half-stake, as CEO G. Steven Farris explained in February (see Daily GPI, Feb. 27). “In 2014, we need to right-size it for us,” Farris said of Kitimat. “This is not a project Apache can afford…”

The gamble to trim the portfolio and pull more money into the U.S. onshore already has paid off handsomely. Led by its No. 1 global focus, the Permian Basin, Apache’s 1Q2014 profits soared (see Shale Daily, May 9).

More than two-thirds of this year’s $8.5 billion capital budget is earmarked for North America, with most of the spending in the U.S. onshore.

It’s not enough, Jana said in its letter.

“The recent words and deeds of Apache’s management indicate they see the opportunity and will do what it takes to realize shareholder value,” the letter said. But if more actions aren’t taken, Apache should consider being sold. “A value-unlocking opportunity this obvious and extraordinary is unlikely to persist.”

Jana’s investment is welcome, said Apache spokesman Patrick Cassidy. He told NGI on Tuesday that the board and management team “value open communications with its shareholders and constructive input toward the goal of enhancing value for all Apache shareholders.

“We are focused on continuing to execute our strategic plan to rebalance our portfolio and to focus our strategy on more predictable and profitable production growth in our North American onshore assets. These efforts have resulted in the divestiture of more than $10 billion of assets over the last 18 months. We will continue to take actions to enhance shareholder value.”

“Since the February 2014 analyst meeting where the baseline expectation was that the LNG business would be retained (selling down the 50% interest in Kitimat has been a consistent goal), there has been a change in Apache’s messaging on the topic. Recent investor presentations and press articles have suggested all or part of Wheatstone could be monetized…

“From this perspective, Jana’s proposal is likely to reach more sympathetic ears at Apache (today relative to six months ago), in our view. The good news for current shareholders is that the substance of the activist proposal has likely already been substantially evaluated by management and a process to this end could already be underway, if not nearing completion.”

Analysts with Tudor, Pickering, Holt & Co. (TPH) said Tuesday the letter was “positive for sentiment and generally what investors are looking for…

“APA has been upfront in 2014 about its intentions to monetize Kitimat and Wheatstone, as these low-growth projects are two-three years away from generating cash flow” and they ‘remain an overhang on shares.”

Apache’s 13% stake in Wheatstone could be worth $2.5 billion, depending on the sale time, according to TPH. That figure is based on cumulative $2 billion in capital spending as of the end of March, as well as an implied value from Royal Dutch Shell plc’s sale of a 6.4% interest earlier this year for $1.14 billion. The sale “would more likely be a positive for optics than net asset value, as reinvestment risk remains.”

There are parts of the North American portfolio that “could take more capital,” including the eastern trend of the Eagle Ford and the Permian on the margin, “but we suspect any proceeds would go largely toward additional share buybacks and/or dividend increases.”

The target on Apache is far from Jana’s first attempt to sway management teams to its way of thinking. For instance, late last year Jana urged producer QEP Resources Inc. to spin off the midstream unit, a plan that the company executed in December (see Daily GPI, Dec. 2, 2013).