Apache Corp., which is working to balance its ample natural gas production in the Permian Basin with more oil and liquids, hit a record 248,000 boe/d in the West Texas-New Mexico play during the first quarter, 36% higher year/year and up 5% sequentially. 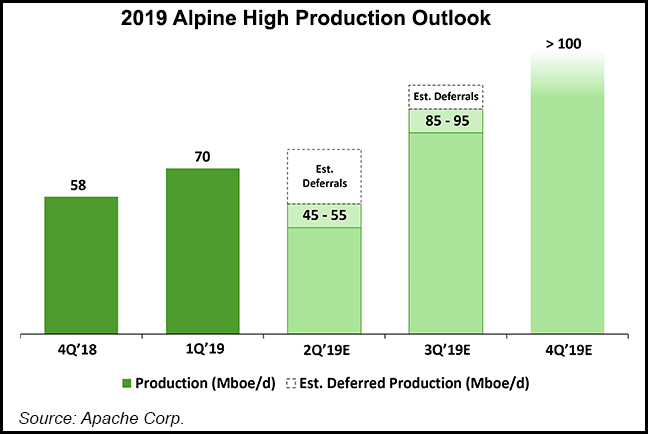 Permian production exceeded guidance by 5,000 boe/d, even though low natural gas prices led the Houston operator to defer some volumes from the No. 1 Alpine High play during March in response to severe Waha hub price weakness.

“At Alpine High, where we also had a relatively low number of completions, production was up significantly from the fourth quarter,” CEO John Christmann said during a quarterly conference call Thursday. Output was “in line with our guidance of 70,000 boe/d,” which by itself was up a whopping 165% year/year.

The Permian gains in the first three months came in part on reduced costs, he explained. Since 2017, drilling costs in the Alpine High have been trimmed by 20%, while completion costs are down by one-third. The record output also came even after one of the two completion crews was sent on an extended hydraulic fracture “holiday” through the quarter.

Look for more growth from the Permian in the second half of the year as additional natural gas processing is installed and takeaway expands.

Altus Midstream Co., formed last year to fund the growing infrastructure needs of Alpine High, holds most of Apache’s gathering, processing and transportation assets in the No. 1 prospect. The cryogenic processing buildout is ahead of schedule, the CEO noted. In addition, Apache is gearing up for continued oil growth going into the last half of the year.

Plans are to run on average 12 rigs across the Permian this year and bring online 85 wells at Alpine High with a rich gas development focus. Apache also plans to tie 67 wells to sales in the Midland sub-basin and 44 wells in other Delaware plays.

“In the Permian, we are poised to deliver attractive oil growth and a substantial cash flow uplift at Alpine High in the second half of the year,” Christmann said. Apache is showing gains despite the price environment, “with strong execution, well performance and delivery against our production and capital guidance.”

Apache ran on average 16 rigs during the quarter, all but two in the Permian, where it drilled and completed (D&C) 39 wells across the Delaware and Midland sub-basins. The Delaware operations now extend into the Dixieland and Pecos Bend in Reeves County, as well as the Slope play in southeastern New Mexico. Outside of Alpine High, four wells were placed online during the quarter.

The company exceeded both U.S. and international production guidance on a lower than expected capital budget. Capital expenditures (capex) in the upstream overall declined 27%, or $218,000, from 4Q2018, but production was 16,000 boe/d higher, or 12,000 boe/d above guidance.

Apache reiterated it would not exceed the annual capex guidance of $2.4 billion for the year. Production guidance still remains on track to climb by 6-10% from 4Q2018 to 4Q2019, 12-16% growth in the United States, including 5% growth in Permian oil.

“We previously stated Apache’s commitment to returning at least 50% of our incremental cash generation from all sources to investors, before increasing our planned activity set,” Christmann said. “In keeping with this commitment, our 2019 planned capital activity and budget remains unchanged, and we will begin returning incremental cash to investors in the coming months. This is of course in addition to our current regular dividend.”

International output climbed 6% sequentially, benefiting from new wells in the North Sea and a revamped waterflood program in the Forties field. Apache averaged three rigs and produced 66,000 boe/d in the region, its highest quarterly output in two years.

The year so far is progressing well, Christmann told analysts, with overall production strong in the first quarter, “and we are demonstrating excellent capital discipline and cost control..

“Our strategy remains the same,” he said. “We will fund an activity level investment program capable of delivering long-term returns and sustainable growth while living within cash flow at reasonable oil prices and returning capital to investors.”