News from the Permian Basin continues to improve for explorers, with Apache Corp. on Wednesday announcing it has unearthed a huge play in a less traveled area of West Texas that may hold 8.1 billion boe of resources, with at least 75 Tcf of rich natural gas and 3 billion bbl of oil in the Barnett and Woodford formations alone. 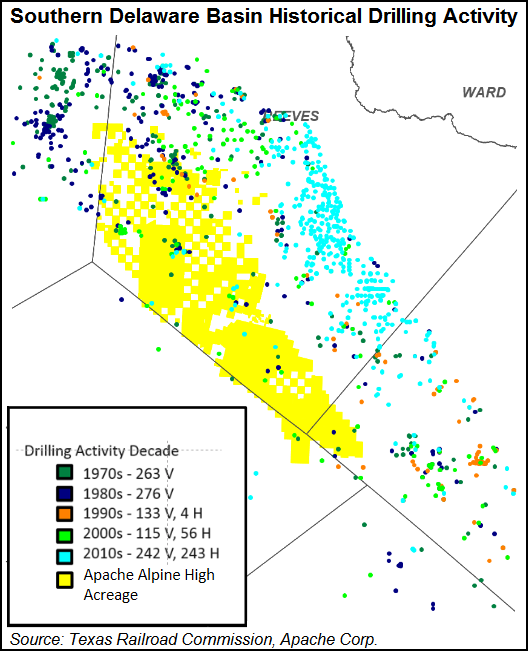 Dubbed the “Alpine High,” the play near the Davis Mountains is within the southern end of the Permian’s Delaware sub-basin, an area long overlooked by geologists who considered it a riskier fit for horizontal drilling. It also sits not far from the hard-to-crack Marfa Barnett-Woodford Shale, which sits largely in Presidio County, TX.

Apache quietly began acquiring mineral rights about two years ago, paying on average $1,300/acre — well below the lofty prices shelled out for recent leaseholds in the Permian. The operator now holds more than 300,000 net acres, about two-thirds of the estimated 450,000-acre field.

“This is a world-class resource,” CEO John J. Christmann IV said during a presentation early Wednesday at the Barclays CEO Energy-Power conference in New York City. “We are very early in starting to understand how big this is going to be.” The discovery is “an immense resource,” holding the potential to transform the Houston-based operations.

Alpine High has 4,000-5,000 feet of stacked pay in up to five distinct formations including the Bone Spring, Wolfcamp, Pennsylvanian, Barnett and Woodford. Already identified are potentially more than 3,000 future drilling locations in the Woodford and Barnett formations alone, with the wet gas window plays able deliver a combination of rich gas and oil.

“The proximity to the Davis Mountains was likely key to the area remaining unexplored for so long,” NGI market analyst Nathan Harrison said. “The more folding of the terrain, the more difficult it can be for drillers to run long horizontal laterals while staying in the target layer.

“This area is distinct in that the emphasis is not on the usual Permian sub-basins like the Wolfcamp, Bone Spring and Avalon, but instead on the Barnett and Woodford layers.”

Apache’s initial estimates for the Woodford and Barnett zones indicate a pretax, net present value range of $4-20 million/well, at benchmark oil prices of $50/bbl and natural gas prices of $3.00/Mcf. Expected well costs in development mode for a 4,100 foot lateral are estimated to be $4 million/well in normally pressured settings and $6 million in over-pressured settings.

Nineteen wells have been drilled to date, with nine producing in limited quantities because of infrastructure constraints. Six of the producers are in the Woodford, with one well each in the Barnett and the shallower Wolfcamp and Bone Spring.

Initial wells produce more natural gas than oil, and the wells may be capable of providing at least a 30% profit margin at today’s commodity prices, including all drilling costs, according to Apache. In fact, some wells may be so prolific that they could break even at a price of 10 cents/MMBtu.

The discovery “is the culmination of more than two years of hard work by the Apache team,” Christmann said. “While other companies have focused on acquisitions during the downturn, we took a contrarian approach and focused on organic growth opportunities…We are incredibly excited about the Alpine High play and its large inventory of repeatable, high-value drilling opportunities.”

In fact, Apache’s legacy Permian operations, and in particular the Delaware, already were delivering the biggest punch to the resource base (see Shale Daily, May 6). The additional resource could make over the company, which until prices took a dive two years ago, had spread its resources far and wide across the globe.

Reeves County has been a go-to destination for producers large and small, said NGI’s Patrick Rau, director of strategy and research.

“In addition to Apache, Occidental Petroleum Corp., Anadarko Petroleum Corp., BHP Billiton, EOG Resources Inc., Cimarex Energy Co. and Chevron Corp. have been some of the most active drillers in Reeves County since 2015,” he said.

While the Woodford and Barnett are getting the first delineation work, still to be further studied are “what we believe will be a significant number of oil-prone locations in the Pennsylvanian, Wolfcamp and Bone Spring,” Christmann said.

Production from Alpine High is not planned before the second half of 2017, Christmann told investors. However, to accelerate activity, full-year 2016 capital spending has been increased by $200 million (11%) to $2 billion, with the discovery drawing about one-quarter of the fund through the end of this year.

It may take several years to fully ramp up production because of of a lack of pipeline and processing infrastructure in the wide swath.

The Alpine High is putting a cherry on top of the wildly popular Permian Basin, which continues to draw a plethora of producers. NGI‘s newly released special report Permian: ”The Mother Lode’ — Texas Play Heats Up as Industry Looks to Get Back to Work takes a closer look at who’s doing what, where, and for how much in the play.

Early well results indicate high initial production rates “with some variability, so further de-risking is needed before the market can ascribe more value.”

There’s plenty of room for drilling and completion optimization, and analysts plan to keep an eye on progress over the next 12-18 months. Of interest will be results from delineation in southwestern Pecos County and the northwestern edge of the acreage to test shallower Wolfcamp and Bone Spring formations, to name a few.